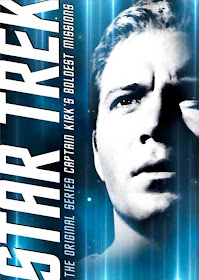 Coming in March will be a new TOS compilation DVD set, Captain Kirk's Boldest Missions, featuring eight, bold missions... So far only three episodes to be included in the two-disc set have been revealed, in the official description, posted by TV Shows on DVD, who also posted the cover concept (not final) pictured.


2-disc set at a great value price: 8 episodes from the science fiction classic, Star Trek: The Original Series, featuring the most thrilling adventures of Captain Kirk (William Shatner)! Captain James Tiberius Kirk steps squarely into the spotlight in this thrilling Star Trek collection that features his greatest interstellar adventures. And the commander of the starship U.S.S. Enterprise finds a galaxy full of intriguing missions, as he and his crew are destined to go "where no man has gone before."

From an encounter with the mysterious Balok in "The Corbomite Maneuver," and attempting to rescue survivors from a planet-killing machine from another galaxy in "The Doomsday Machine," to the critically acclaimed, Hugo Award-winning "The City on the Edge of Forever," this collection of eight thrill-packed, heart-pounding adventures from the original Star Trek series will have you joining Captain Kirk and the Enterprise crew as they soar off on exciting quests and unforgettable encounters.

While this is obviously aimed at the more casual Trekkie (not wanting to take on whole seasons) it might be worth keeping an eye out for further details of this when they are released, as similar compilations before have included new extra features; last year's TOS: Origins set had new introductions, and the older Fan Collective releases came with various featurettes and commentaries.