Fascinations, makers of novelty gifts, including metal models of various buildings and vehicles (including Star Wars ships and droids), is soon to add Star Trek to their range, with a collection of four metal starship model kits. Intricate models of the USS Enterprise, USS Enterprise-D, Klingon Bird of prey, and Vor'cha class will be available. They are delivered as flat sheets of laser etched steel, which need to be folded together, and held together using lots of tabs, to make the 3D form - The finished models range from three-and-a-half to four-and-a-half inches long/wide. StarTrek.com have previewed all four models: 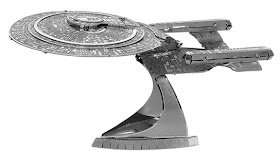 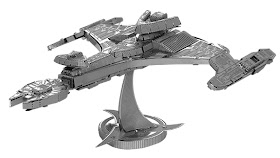 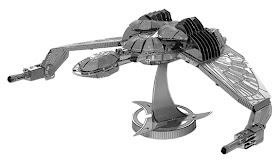 These will be out later this year; StarTrek.com state later this month, while Fascinations have told me October, and their Facebook page says November! The Facebook page also posted another images which so shows alternate views of the models, including the Enterprise with correct nacelle orientation: 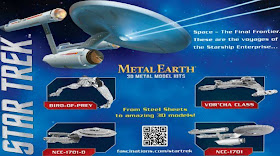