Aeroshuttle test footage, and more Voyager behind the scenes goodies

Maybe you've heard of the Aeroshuttle? It was the captain's yacht-like smallcraft attached to the underside of the USS Voyager's saucer section. It was basically Voyager's personal runabout.

The Aeroshuttle never appeared on-screen; it's role was ultimately filled by the Delta Flyer. But over the years has popped up in the pages of several behind-the-scenes and technical publications, comics, Ships of the Line, and most recently in the Voyager issue of The Official Starships Collection, which examined the launch sequence of the shuttle. Well now we can see that launch sequence in motion, as visual effects artist Adam "Mojo" Lebowitz has posted a concept test video of the Aeroshuttle launch:

Here's what Mojo had to say about the footage:


This was a visual effects concept test to show the producers of Voyager what a launch sequence of the (as of yet) unused "Aeroshuttle" might look like. This special craft was capable of warp speeds and able to fly in a planetary atmosphere. Ultimately, the decision was made to leave the Aeroshuttle alone and introduce the Delta Flyer (this was shortly before the movie "Insurrection," which featured a launch sequence of the Captain's Yacht - the producers didn't want Voyager to "steal the thunder" of such a scene from the upcoming movie). The test was created by Voyager CGI Supervisors Rob Bonchune and Adam "Mojo" Lebowitz, under the supervision of VFX Producer Dan Curry. 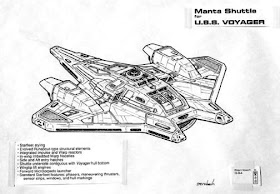 Star Trek designer Rick Sternbach has also be sharing some behind the scenes Voyager stuff lately, on Facebook, in the lead up to next year's 20th anniversary of the series. That includes this concept art for what would eventually evolve into the Aeroshuttle.


The not-so-small AeroShuttle tucked up under the Voyager forward hull was based roughly on the Starfleet Runabout spaceframe, in hopes that if we ever saw it, we could modify the existing set from DS9. Ah, sadly, it was not to be, but we did get to see the ventral side and I did get to write a bit of imagined history for Star Trek The Magazine. The craft began life as a concept patterned after a manta ray and was nicknamed as such. That turned into the AeroWing, which coincidentally was a copyrighted name for a toy connected to The Mighty Ducks. Headscratching ensued. AeroShuttle became the in-house term.

Continue after the jump for a look back through the evolution of the USS Voyager design:

The earlier concepts for Voyager were a lot more pointy, as Rick explains, this gradually evolved into the curvaceous Voyager we know:

One of the preliminary views of the ship based on some Runabout hardware styling, following an early approval from the producers for a smaller (smaller than Ent-D), slightly pointy vessel with down-turned pylons. 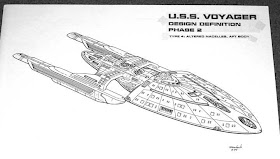 Here's a front view of the early, more angular Voyager (going backwards just a little in time). A few changes were made to the forward hull and the shape of the shuttlebay landing deck to make the third phase drawings and foamcore study model. 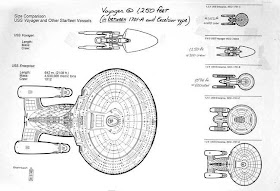 This sizing chart is still earlier than the first pic in this series, but it shows the thinking of the possible size for the angular third phase. I did a few versions of the chart with the ship at different lengths for the producers; this one comes in at 1250 feet. Other Starfleet ships are added to show the size relationships. 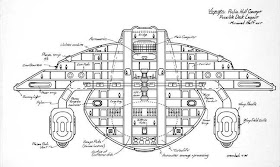 Here's a cutaway from the front of the angular Voyager, or at least a version of it, partly to get a sense of the deck numbers and partly to place standard bits of Starfleet hardware. Whatever sets got designed and built would be fit into the eventual blueprints (to marry up the interior and exterior), like Captain Janeway's ready room, the conference lounge, and crew quarters, but at this early stage it was still pretty fluid.

One additional angle on the foamcore mockup of the ship, just before curvitization. I may have mentioned this before, but this particular mockup escaped our custody, I assume about the time the art department was shutting down in 2001, but I can report that it is now in safe hands (not mine) and will be restored and a few dings repaired. A few other foamcore mockups I built, like a very early Type 6 TNG shuttle and the alien shuttle Nenebek, also went this way or that, but c'est la vie. 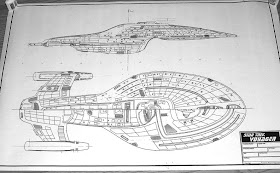 Once the perspective sketch of the curvy Voyager was approved, a preliminary set of ortho views was drawn up on our standard 24"x36" blueprint paper. The producers and the VFX folks were given copies of this one, with the added notice "Not for Construction - For Discussion Purposes Only." At this time, we still didn't have a final approval on the nacelle articulation, but I kept drawing sketches and played with the ship in rough CG printouts. As you can see, most all of the hull surface details were falling nicely into place.

Once the preliminary blueprints had been approved, drawn on 24"x36" tracing vellum, the real blueprints were started. The producers and VFX decided that the miniature would be five feet long, and that's how big I made the construction drawings. Full size, 60" long, on slightly longer paper. Luckily my drafting table was long enough to hold them. The first tricky part was getting the top/bottom plan view -and- the starboard elevation on the table together to match up. The other tricky part was having to reach three feet or more near the top of the table to draw with the t-square and triangle and a bunch of templates. Worked out, though. The general hinge area for the pylons is indicated, but the final look would be determined by the model makers based on how things came together structurally. The manta shuttle is still there, soon to be replaced. All of the other hull features are pretty much locked.