A few books bits for you. Starting with Cross Cult's latest cover art. This new art, posted on Facebook, is for the German edition of the New Frontier novel Being Human, which will be released as Menschsein in Germany in October. 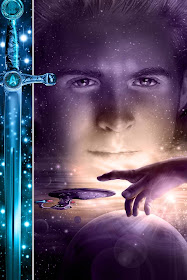 Back in the English speaking world, David Mack snuck out a little hint about his forthcoming novel, Section 31: Disavowed - As well as being a follow up to Bashir's story in The Fall, it will also have a connection to the Mirror Universe novel Rise Like Lions, as Mack explained on his blog while talking about that book:


It represents the culmination of multiple story arcs I had set into motion in the Mirror Universe, and it will serve as the setup for my upcoming Section 31 novel, Disavowed, coming in November 2014.

In another alternate universe, Comics Alliance recently interview nuTrek ongoing comic writer Mike Johnson, and artist Yasmin Liang, about the two-part gender-swapped story, Parallel Lives. Johnson explained the origin of the story, which could have focused on a completely different alternative crew:


I wanted to try something attention-grabbing and slightly weird, in the tradition of the more daring original episodes, and joked that a “Lil’ Star Trek” series following a miniature crew would certainly be that. Sarah suggested an alternative that still embraced the idea of seeing the crew in a different way: switching genders. It’s certainly attention-grabbing, but it is also very “Star Trek” in the way that it invites an examination of deeper themes in the story beyond just the unusual premise. 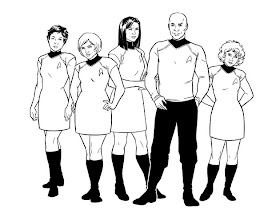 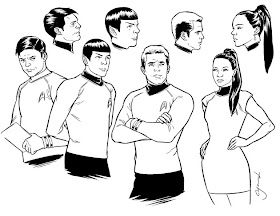 
Kirk, Spock and Uhuro’s designs were all handled by the cover artist, Cat Staggs. Even then, Mike provided me with some guidelines for the rest of the crew! When I approach designs, especially redesigns and genderbends, I try to determine the main motivations and personality behind the character. For instance, Bones as a woman would be just as grouchy and still be taller than Kirk. I just like the idea of Bones being a large, mean-looking woman! And of course, Chekov would be cute as a button.

It’s not really a science though and I’ve done my fair share of genderbends for fun. People get MAD about genderbends. Have you seen how angry they get? I’m actually a bit afraid for when the books are released and people read them.

Johnson also talked about the direction of the series from this point onwards:


Only in the comics will we see the adventures of the crew as they leave the Federation in the rear-view and head out into uncharted space. This is a departure from the original television series, where the Enterprise would often be visiting existing colonies and shuttling diplomats around when it wasn’t finding new worlds. We’re leaving all of that behind, so the comic really embraces the sense of a lone ship out there on the seas of space. No backup, no rescue if things go wrong. Hopefully everybody survives to make it to the next movie…

We’re leaving the re-interpretations of original episodes behind in favor of all-new adventures. This doesn’t mean we won’t see a familiar face in a new light now and then, but the focus will be on new stories. There’s a lot of fallout from Into Darkness to explore, and new additions to the crew we want to get to know.

You can read the full interview with both Johnson and Liang on Comics Alliance.