...or something like that anyway. Spock, the Zachary Quinto variety, appears briefly in this new advert for the X-Box One. His appearance is contextualised later in the advert when the nuTrek films are shown on offer as movies you might watch on your next generation X-Box.

This is one of a string of Star Trek adverts lately, following the General Electric adventure, the call back to The Motion Picture in Samsung's smart-watch adverts, and numerous tie-ins around the release of Into Darkness. A good sign for Star Trek's strength in popular culture right now I guess? 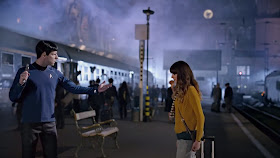