Amazon UK have added listings for TNG season three and the stand-alone release of The Best of Both Worlds on bluray, revealing cover art for both titles: 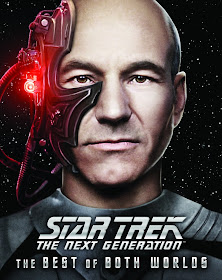 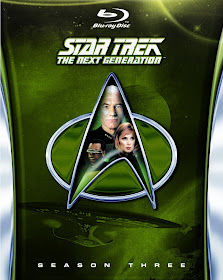 Both are due at the end of April, so I'm sure other retailers will be putting up pre-orders for them soon as well. In other bluray news, TrekCore recently ran a seven-part interview with TNG extra features producer, Robert Meyer Burnett, who talked at length about the work going on in the production of the extra features for the TNG and Enterprise sets by himself and Roger Lay Jr. He also had new regarding TAS:


There are plans afoot to bring The Animated Series to Blu-ray, and I have an idea that would be crazy to pull off, but if we could it would be really interesting.

My dream crazy TAS extra feature would be a whole new episode, made using the TOS cast voice recordings made for the cancelled video game Secret of Vulcan Fury. *fingers crossed*

Burnett also elaborated on what to expect in season three, and further along with the TNG project. Continue reading after the jump for highlights of what's to come in season and beyond:


What I really like is the idea that for us, it’s the most successful season, it’s my favorite season of Star Trek – but for the people making it, it was a nightmare. I love the fact that Ira Behr, who later took Deep Space Nine to such heights, he worked on The Next Generation for only the third season – and boy, Ira Behr does not pull any punches. He’s got great stories to tell. But one of the things we also want to do in Season Three is a celebration of Michael Piller – who changed the writing staff forever and had his mandate that all the stories should be about the characters first, as opposed to external threats – he really changed the shape of The Next Generation. So we’ve got that coming; we’ve got the “Inside the Writer’s Room” piece… it’s really, I think for Season Three, the writers’ VAM. You have Ron Moore and Rene Echevarria selling their very first scripts to television; of course, you have the cliffhanger of “The Best of Both Worlds”… so that’s what I’m looking forward to; concentrating on the writing of that season and the changes that the show went through. 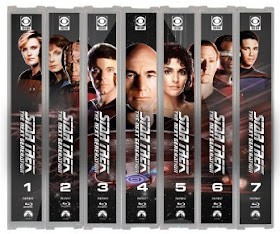 We can expect more commentaries:


We’d like to continue to do more commentaries. I know that Ron Moore – who did such great commentary work on Battlestar Galactica – has offered to come in and do commentaries on every one of his episodes! And, like, I can’t wait to do a commentary on “Sub Rosa”, which is an episode I learned from the writers’ reunion that everybody has very strong feelings for! (Laughs) So I’d love to do an episode where things went wrong; a commentary for an episode that isn’t the greatest.

There are also more never before seen behind the scenes treats to come. Including test footage for doing all TNG's effects in CGI:


I’ll tell you one of the things we’ve found that is pretty exciting – we haven’t used it yet – when The Next Generation was first talked about, they had to figure out how they were going to do the visual effects. There was talk at the time – this was just a couple of years after The Last Starfighter, when they did all those space visual effects – that there was talk about going all-CG. In 1987.

Various effects houses did a sort of bake-off, where they were given some footage from Star Trek III to do transporters and phaser fire… then they were asked to do CG models of the Enterprise. So we have these tests that these various effects companies did of visual effects – what the visual effects would have looked like had they been all CG. Ultimately, they were a little, uh, crude – to say the least – so they opted not to go that route, and they opted to go with models and motion control, THANK GOD, but we have this footage, and we’re going to use it on one of the subsequent releases. We don’t know when, because it’s not season-specific, but it’s crazy to have.

Burnett gave some interesting incites into how a different variety of lost footage is coming together to make the new gag reels:


When the editors had originally cut the show, they put aside footage that could be used in blooper reels, because it was asked for, originally – but it was never used. So when we went back into these boxes of negatives, there were these outtakes and things that were put aside. Again, god love CBS Home Entertainment, this is not something they had to do, but Dave and Ryan felt it was important – they transferred this footage, into HD, which is amazing; I got six hours of outtakes. Now, most of that, truth be told, is just blown takes. But what I wanted, what was important to me… the outtakes had to convey part of the actors. You had to get a sense of who they were, their sense of humor; you had to know something about them.

The cast reunion from the season two set has gone down well, and we can expect more in the vein, with a writers reuinion on the way for season three:


For Season Three, focusing on the writing of the show – we’ve done a piece we call “Inside the Writer’s Room” – we knew that Ted writer-director Seth MacFarlane was a fan; we’d had him in for a single interview for Season Two. He, to me, represents the fans, all of us – even though he’s a celebrity. But at the time TNG aired, he wasn’t. But he’s both a huge industry success and an uber-fan, so he was perfect to host the piece.

Also on the way is an art department reunion:


It’s unique in the world of motion pictures and television that you have guys like Mike Okuda, who worked on Star Trek for eighteen years – longer, if you count his work on Star Trek IV; a guy like Rick Sternbach who worked on The Motion Picture; Herman Zimmerman, who was only on the first season of The Next Generation, but from Deep Space Nine on; Doug Drexler… how many times do you have an art department that worked for so many years doing this? Herman Zimmerman is just so beloved, and to have them all come together and just shoot the shit, it was great. The stories that come out, and the camaraderie… these are things that don’t normally come out in interviews and to see that kind of thing is really tremendous.

And there are plans for even more, with hopes to bring together composers of music for the series, and a reunion of reunions for season seven:


One of the roundtables I would love to do is a composer roundtable, with all the people who worked on Star Trek.

What I’d like to do, what Roger and I are talking about, is for Season Seven – I’d like to have the cast and crew get together. Like, I want to see Rick Berman sit down with the cast. I would like Rick Berman to host and moderate a discussion. I’d love to see that – have the writers, have a big blowout… if that could be done. 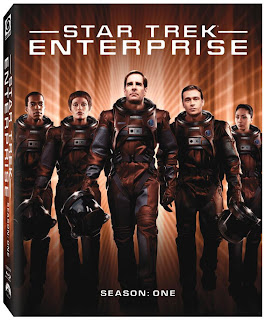 While the special features for Enterprise are being handled by Roger Lay Jr., Burnett was able to reveal some of what to expect:


With Enterprise, it’s considered, for the lack of a better word, a failure – in that it didn’t run for seven seasons the way the other shows did; it changed its premise; it never had the ratings it wanted to have; even its creators are critical of it. Knowing that – Roger has really taken the reigns and spearheaded that documentary – his Enterprise documentary is unbelievable. You talk about candor; you talk about people talking about what went wrong – and what went right – with the show… the Enterprise documentary is really, really insightful in terms of what went right and what went wrong.

On the first season of Enterprise, there’s a show called On The Set, which was completed but never aired, which Brannon Braga mentioned to us, dealing with the production of season one. It was going to be shown, but never was; at Roger’s behest, CBS acquired it, and it will appear on the Season One blu.

You can read the full interview with Robert Meyer Burnett, with more incites into the production of the bluray extra features and general discussion on Star Trek, on TrekCore.