Latest from the Deck Building Game

Since I last mentioned Bandai's Star Trek Deck Building Game, the TOS edition has been released, and this month a TOS themed gaming mat is due to join the collection. It will look like this: 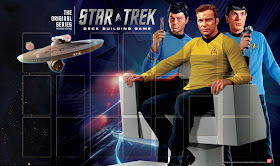 Bandai have also recently announced the game will soon be officially distributed in Europe, and indeed it has now appeared for pre-order on Forbidden Planet. They are expecting all three card sets in February, though don't currently offer any of the mats.

Completist players who haven't been able to attend events where various promo cards have been distributed, or didn't manage to get them through pre-order bonuses, will be pleased to know many of the cards offered so far are now available to purchase through the BoardGameGeek Store: 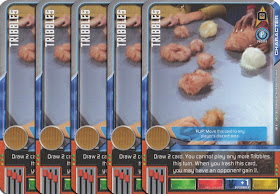