Last summer I reported on Laser Books' return to publishing Czech translations of Star Trek novels. After a pause in their output for a couple of years they had prepared a packed line-up, catching up on many of the recent series. Alas after getting a couple of books out last year they had some complications.

Next book on their schedule was kicking off their run of Enterprise books with Kobayashi Maru. Laser had thought they would then continue with the Romulan War series, having reserved the rights to do a translation, but as their editor, Albert Balatka, has explained to me, that was when things got tricky - It turned out in the intervening time another publisher, Baronet, had secured the rights to the Romulan War duology. Baronet and Laser have since decided to work together on the Romulan War books. So now Kobayahi Maru (Kobayahi Maru) will be coming from Laser this month, and Romulanská Válka: Pod Krídlem Dravce (Romulan War: Beneath the Raptor's Wing) follows in February, with Romulanská Válka: Ti, Kteří Celí Bouři (Romulan War: To Brave the Storm) due to follow in May.

Laser Books have changed the cover design of Kobayshi Maru since I last posted their artwork. Here is the new version by James Schejbal: 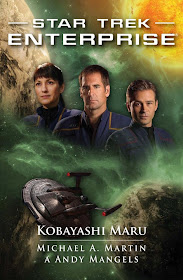 Balatka told me they intended to have Trip disguised as his Romulan alter-ego Cunaehr on the cover. That doesn't seemed to have happened in the end, but they did do a very rough mock-up of that sort of thing for a promo image they posted on the Czech Star Trek books Facebook page: 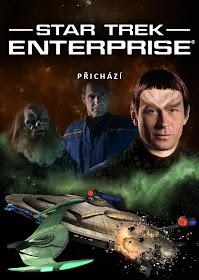 The cover for Pod Krídlem Dravce (Beneath the Raptor's Wing) is much the same as the original US version, although they have altered the back cover, allowing them to add in a Romulan Bird-of-Prey: 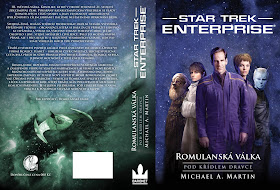 Balatka also sent me over a full cover for the already released Černý král (The Red King). Aside from changing the red king to the black king in the title and art work, they have also made the back cover the same colour as the spine, and plan to continue this treatment with further books in the Titan series (the original US ones all have a blue coloured back covers, until Synthesis, which also adopted the spine and front cover colours): 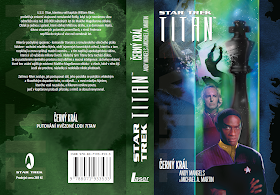 Another book that was intended for last year but is currently held up is Smrt v Zimě (Death in Winter). Balatka is hoping to be able to include the Titan short story Improvisations on the Opal Sea: A Tale of Dubious Credibility, which was originally published in the Tales From the Captain's Table anthology. That desire has set back the release while Pocket Books work out if they're allowed to include the short story with Death in Winter.

Beyond that they intend to complete the release of the String Theory trilogy with book three, Evoluce (Evolution), and then plan to get the novelization of Star Trek Into Darkness out in time for the Czech release of the film in June.

After Into Darkness they will be continuing with the release of TNG, and Titan, working their way towards Destiny.