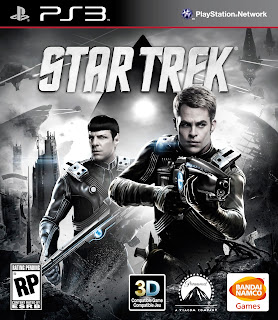 Yahoo have recently been allowed a preview of the forthcoming Star Trek video game, allowing them new incites into the content and style of the game. They gave this overview of the story in their report on the preview, which (assuming they've not confused the term galaxy) seems to give a new extra-galactic origin for the Gorn:


As the game opens, the U.S.S. Enterprise is sent to investigate a space station under duress. The station has been tasked with research on the New Vulcan colony project, developing a new home world for Spock’s species, whose home planet was destroyed in the last film.

But as Kirk and Spock explore the station, they learn something has gone very wrong. The Starfleeet commander in charge of the station has attempted to exploit a risky new technology that has ripped open a wormhole in space, which serves as a doorway for the invading Gorn, a violent and imperial species first seen in the 1967 episode “Arena” from the original Trek TV series.

The “Arena” episode is one of the most beloved of the original series. So, the Paramount team was careful about updating a classic villain. However, the Gorn is nearly as well known for the dated rubber costume worn by actor Bobby Clark. Miller and his team set out to update the Gorn, creating no less than 15 different species of Gorn, including brute fighters, cunning team leaders and even a female Gorn that leaps off of walls to attack unsuspecting players.

When Spock performs a mind meld on one of the captured Gorn we also learn some fun and exciting details about their backstory as a merciless race of marauders that have conquered their own galaxy through endless war.

During that mind meld sequence the player controlling Spock is forced to take part in the Gorn’s hostile actions, including the cold-blooded murder of the Vulcan commander aboard the space station; a man who served as Spock’s mentor. 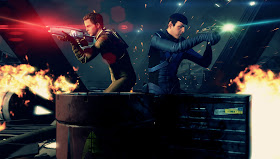 The report also expands on the different experiences players will get playing as either Kirk or Spock:


Kirk and Spock experience events in the game through their own personal points of view. Those experiential differences affect the larger aspects of the game including combat techniques and approaches to problem solving. During away missions, Kirk can call in an airstrike from the Enterprise, while Spock is able to deploy his famous Vulcan pinch move.

The unique perspectives also carry down to how other, non-player controlled characters interact with the player. Yes, that means the same female alien character hanging out in the Enterprise hallways will flirt with Kirk but largely ignore Spock.

And reassures peace loving trekkies, it's not all played with phaser in hand:


And for anyone concerned that a new Star Trek game would be just be another mindless, shoot-em-up, there are several pleasant layers to the game that should please more cerebral gamers. For example, the tricorder plays a significant role in the game, allowing players to thoroughly investigate their environments in a technique that evokes Batman’s “detective mode” in the popular “Arkham” series.

They also noted some details of game play: Two levels will feature orbital skydiving, and there is also an opportunity to fly the Enterprise:


In co-op mode, one player fires the ship’s lasers while the other is in charge of deploying the photon torpedoes.

They also mentioned references to new interpretations of TOS stories:


In one of the most entertaining levels we saw, the game’s developers merged two famous episodes from the original series, during which Kirk and Spock are forced to battle each other to the amusement of their new enemy.

Perhaps the most exciting note for me though regarded the game's soundtrack:


They even brought in Academy Award winning composer, and frequent Abrams collaborator, Michael Giacchino and his 100-piece orchestra to create an original score for the game.

Hopefully we'll get an extra Star Trek soundtrack release out of this too!

The Star Trek video game will be out in April, giving you enough time to play what is apparently a 15 hour narrative, before the release of Star Trek Into Darkness. Pre-orders of the game come with a bundle of additional weapons and uniforms (details of which you can find on my previous report):