The Star Trek Online cryptic store has been updated with a few new items (such as emotes and bridges) and a new starship class, the Nimbus class science vessel, a Destiny class varient which looks like this: 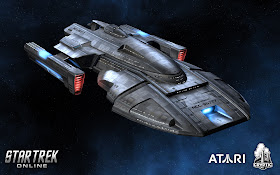 The latest task force mission, Khitomer Accord has also been added to the game, Cryptic describe it like this (full details here):


Continue the fight against the Borg in our latest Special Task Force - "Khitomer Accord"!

You cut your teeth during the Borg invasion of the Vega system. ... Or did you?

The Borg seemed unusually weak, unable to adapt and most of their fleet was already seriously damaged. It seems like someone may have got to them first and softened them up, because if the Borg were at full strength that day, you may not have fared so well.

More questions are being raised as Starfleet intelligence and the Klingon Defense Force have both detected a controlled emission of a massive quantity of chronometric particles in the Vega system. The last time a surge like that was detected, the Borg opened a temporal vortex and attempted to change the history of Earth.

Travel to Vega to investigate exactly what the Borg are up to, neutralize the temporal anomaly and prevent history from changing forever!