TrekMovie has posted a blurb and cover for, Star Trek 365, the reference book coming later this year. Here's the description:

Star Trek 365 is the definitive, comprehensive and authorised guide to Star Trek: The Original Series, Gene Roddenberry’s landmark, groundbreaking television programme that first aired from 1966-69 and went on to become an international phenomenon. A cornerstone of popular and sci-fi culture for more than four decades, the show first catapulted William Shatner and Leonard Nimoy to fame and has, through a long series of feature-film and television spinoffs, led to the creation of a uniquely rich and detailed fictional universe. A visual celebration of the original voyages of the starship Enterprise, Star Trek 365 covers each episode and season in unprecedented detail, combining in-depth synopses, behind-the-scenes histories, and interviews with writers, cast, crew and fans with critical commentary on how the show’s themes resonated when they first aired and how they continue to be relevant today. The book also looks at the original days of Star Trek fandom and the show’s enduring cultural legacy, from the launching of NASA’s Space Shuttle Enterprise in 1978 to the Smithsonian’s exhibition of rare Star Trek material in 1992 to the present day. In addition to its wealth of never-before-seen images and newly commissioned photography of models, props, costumes, collectibles and ephemera, Star Trek 365 uses unprecedented access to the CBS archives to reproduce a treasure trove of still images – newly retouched and remastered – taken directly from the series’ original 16mm film slides. Written by longtime CBS insider Paula M. Block, Star Trek 365 boldly goes where no other Star Trek book has gone before, combining rare and iconic imagery with a complete reference guide to the original show’s seventy-nine episodes – a perfect gift for Star Trek fans of all ages. 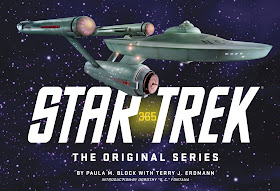