ComicNewsi have posted IDW's solicitations for July, which include three new Star Trek comics and an omnibus:

Star Trek Movie Adaptation #5
J.J. Abrams, Roberto Orci and Alex Kurtzman present the official comics adaptation of their blockbuster film STAR TREK! The creative team behind the best-selling STAR TREK: COUNTDOWN returns to continue the epic adventure as Kirk comes face to face with an older, wiser Spock... and meets a certain Scottish engineer for the first time. Includes scenes not in the original film! 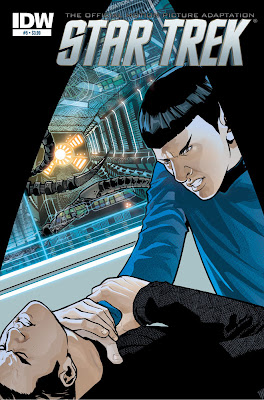 Leonard McCoy, Frontier Doctor #4
Our visit with the Doctor comes to an end with two titanic tales—first, Dr. McCoy must find a way to deal with a virus that just may be smarter than he is… and then a visit to an old friend finds Bones wrestling with a dilemma that cuts across the very heart of his Hippocratic Oath. 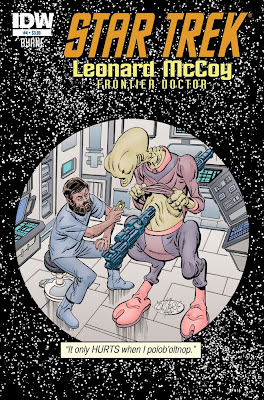 Burden of Knowledge #2
When the Enterprise crew embarks on a mission of planetary First Contact, Captain Kirk finds a peaceful, idyllic society, one happily linked together by a global thought network—or so it appeared. When he discovers a bitter rebellion simmering beneath the surface, will he be able to follow the Prime Directive, or find himself compelled to get involved? 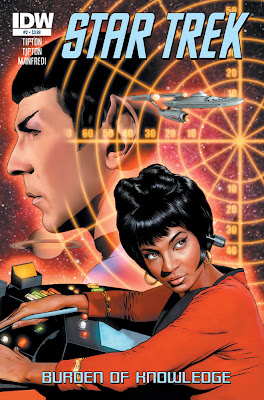 Fool's Gold
Captain Sisko and the crew of Deep Space Nine make their triumphant return to comics! When the station begins to be overrun by thieves, treasure-seekers, bounty-hunters, and other assorted ne’er-do-wells, Major Kira and Constable Odo must find out why. Can they get to the bottom of it before the station’s new visitors bring things to a boiling point?! 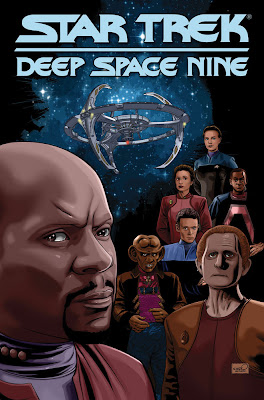