Comics News i have posted IDW's solicitations for May, which include two Star Trek issues and an omnibus:
Star Trek Movie Adaptation #4


The official comics adaptation of the blockbuster film STAR TREK continues in this mini-series presented by J.J. Abrams, Roberto Orci & Alex Kurtzman! Witness the final fate of Vulcan as Kirk and Spock battle the evil Romulan, Nero! Brought to you by the creative team behind the best-selling STAR TREK: COUNTDOWN, this series includes scenes not included in the original film! 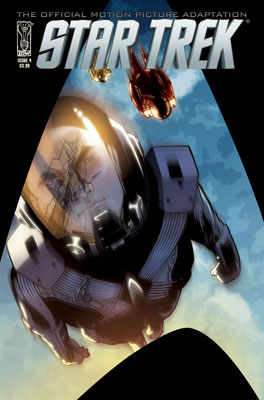 
Doctor McCoy hates mysterious ailments. He also hates the transporter. Now he finds himself on a world beset with one, where the only means of getting around is the other. John Byrne’s tale set in the period before Star Trek: The Motion Picture continues here with two covers from Byrne.


Prepare to embark on an epic three-part adventure starring the legendary crew of the U.S.S. Enterprise as they sacrifice their lives, ship and freedom to save the universe from imminent destruction. Spanning across three motion pictures, the Star Trek: Motion Picture Trilogy is the ultimate story of heroism, duty and friendship that will thrill old and new fans alike. This collection includes IDW's 3-part adaptation of The Wrath of Khan, as well as digitally re-mastered and re-colored editions of The Search for Spock and The Voyage Home.