The final cover for the Coda trilogy(ad) has been revealed, as has a new blurb from the series, and a surprise Star Trek Online short story collection. Continue below for more on these, and all the latest Star Trek prose updates.
Next month begins the Coda trilogy, a series which will bring together the heroes of the Star Trek novel continuity of pre-Picard reset in a "Temporal Apocalypse" mega event. The cover for the final book in the trilogy, David Mack's Oblivion's Gate(ad), which will close the story in November, has finally been revealed, and stars the USS Defiant, seemingly beginning to vanish from reality! 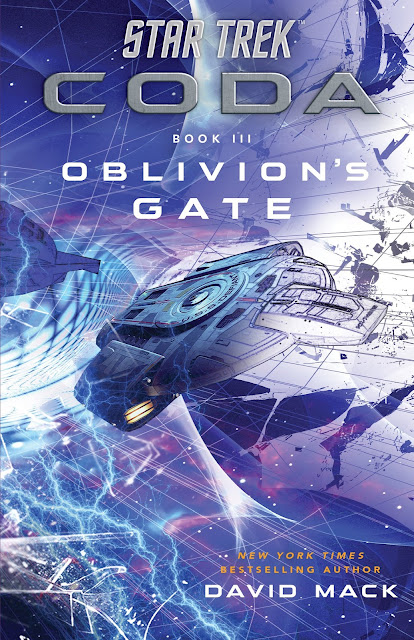 The crews of Jean-Luc Picard, Benjamin Sisko, Ezri Dax, and William Riker unite to prevent a cosmic-level apocalypse—only to find that some fates really are inevitable.
THEIR MOST DAUNTING MISSION WILL BE THEIR FINEST HOUR.
The epic Star Trek: Coda trilogy comes to a shattering conclusion as the Temporal Apocalypse forces Starfleet’s greatest heroes to make the greatest sacrifices of their lives.

Alongside the cover from Dayton Ward's Moments Asunder(ad) and James Swallow's The Ashes of Tomorrow(ad) this cover form a triptych with many of the hero ships of the litverse. I'm quite surprised that this doesn't include the USS Titan; I wonder if it's now too strongly brand associated with Lower Decks?

David Mack also shared on Facebook a version of the cover art without the titles. Not the final art here though, note the broken glass was subsequently enhanced, and the Aventine moved.

In other new from the series, the back cover for the second book, The Ashes of Tomorrow(ad), has also now been released, and includes a new expanded blurb revealing some new story details: 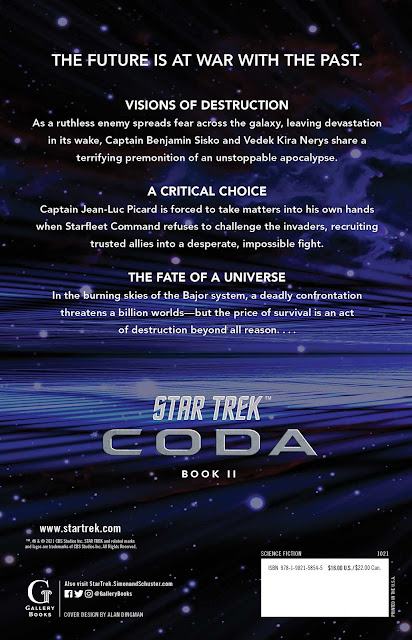 If you're struggling to read from an image, here's the new blurb text:

THE FUTURE IS AT WAR WITH THE PAST
VISIONS OF DESTRUCTION
As a ruthless enemy spreads across the galaxy, leaving devastation in its wake, Captain Benjamin Sisko and Vedek Kira Nerys share a terrifying premonition of an unstoppable apocalypse.
A CRITICAL CHOICE
Captain Jean-Luc Picard is forced to take matters into his own hands when Starfleet Command refuses to challenge the invaders, recruiting trusted allies into a desperate, impossible fight.
THE FATE OF THE UNIVERSE
In the burning skies of the Bajor system, a deadly confrontation threatens a billion world - but the price of survival is an act of destruction beyond all reason...

All three of the trilogy's authors, along with several other Trek writers, took part in a panel at the Shore Leave convention last month. Without giving away any details, they did outline the aims of the trilogy, with Dayton Ward explicitly stating how the trilogy is:

...our attempt to align the novels, the adventures and stories we've been telling in the novels for these many years, with the new paradigm that the television shows have introduced. And in doing so make it a journey worth taking, and hopefully all the folks that have been buying and supporting all these books for many years will not feel left on the side of the road, will not feel slighted, they wont feel like, you know, Star Wars fans when Disney declared everything "Legends"...

James Swallow for a bit more into the feeling of the trilogy:

We've created something epic, is the phrase I keep coming back to. I think that people will love and they will hate what we have done. Because we are doing is telling a story that is dynamic but also tragic. It's an adventure story but it's a disaster story. And it takes you to places that we hope you will enjoy going to, but also to places that, at the end of things, when the curtain comes down at the end of Dave's book, hopefully there will not be a dry eye in the house...

I think possibly the most tantalising comments though were from David Mack, who painted a picture of a series that will be tying up many loose ends in a way that joins up a lot of the previous litverse adventures:

...it was really the strangest thing; because as we were approaching it and releasing what we had to do, we started looking at all the open story threads, and all the dangling narrative arcs that hadn't been completed in all of the many series, and started realising well you could tie this to this, you could link this to this, this is a great opportunity to put these two elements together, and bring those to closure. And we were looking at it, and we said, "it's almost as if we knew what we were doing?" But obviously we didn't, because until we know we were ending it, we didn't know that we were ending it. But once you know that what you're driving toward, I think the goal was to make it look like this is what we intended all along.

Among the other authors in the panel, looking to future books, John Jackson Miller also talked a bit about the very soon to be released Rios-focused Picard novel, Rogue Elements(ad). That including revealed Rios acquired La Sirena from the Iotians, the gangster society from the episode A Piece of the Action, in whatever state it is a century on from the TOS episode. And also that the book will show us the origins of the many Rios holograms; which should be very delightful!
You can watch the full panel here:

In one of Star Trek novels update, the good people at TrekFM's Literary Treks podcast recently had new Star Trek author Cassandra Rose Clarke on to chat about her new TNG novel, Shadows Have Offended(ad). As usual they dive deep into details of the book and the writing, a great extra feature for some behind the scenes thoughts, which I normally leave until after reading the book in question before giving a listen.

Finally, something a bit different: Titan Magazines have announced a new book in there regular releases of content originally from the Star Trek Magazine in themed books. Unusually for that format though, this is a fiction collection, of short stories based on Star Trek Online. Star Trek: The Short Story Collection, Volume 1 is due out in April 2022, and will include nineteen illustrated stories written by Christine Thompson, Jess Heinig, Katherine Bankson, Jaddua Ross, and Sean McCann. Here's the cover and blurb: 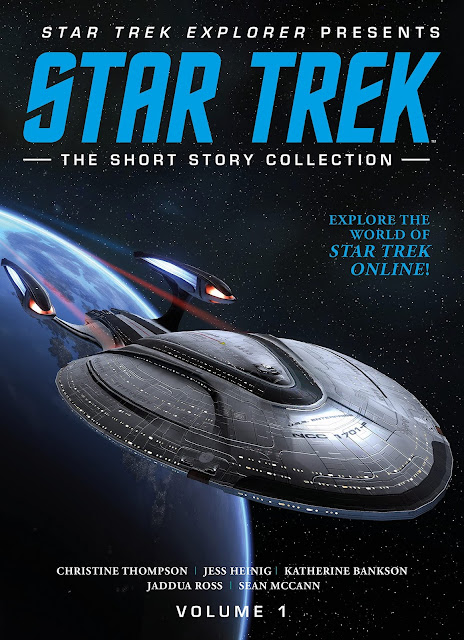 This incredible collecton features 19 illustrated stories exclusively written for the Star Trek Magazine. It features action-packed tales starring iconic characters such as Data, Seven of Nine, and Scotty, plus alien enemies including the Klingons and the Jem’Hadar.

Interestingly this is branded as "Star Trek Explorer presents", rather than Star Trek Magazine; I wonder if the first indication of a rebranding?