Hallmark brings little starships back to the Christmas tree, plus their latest Mirror Mirror figurines

Hallmark have revealed their 2021 Keepsake Christmas decoration range, which includes three new Star Trek releases - Those include the expected continuation of the Mirror, Mirror Storytellers range, and the welcome return of Hallmark's little starships to hang on the tree too. Continue below to check them out.

Last year was the first without a little ship since the Star Trek collection began in 1991 - We got a big ship instead, see below - But the smaller format is thankfully back this year. The starship for 2021 will of course be the latest hero ship, the star of Picard, La Sirena. So far Hallmark have just released a fairly low resolution rendering of this in their Dream Book catalogue, so we'll have to wait for a clearer look of the real thing closer to release. La Sirena is expected in October, and will include sound features, with clips from the show. 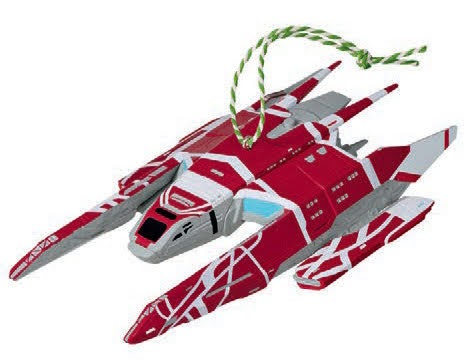 Alongside this we have the continuation of the series that began last year, the Mirror, Mirror themed Storytellers collection. This series is in the middle of a three year run that will bring us mirror universe versions of all the main TOS characters. But these aren't just figurines, they also have sound clips, but moreover they interact with each other to tell the story of the episode, and will interact in different sequences depending how many of them you have to play off of each other.
This year's new characters are Spock and Chekov, sculpted by Jake Angell. So far Hallmark have released two images of mirror-Spock, via their own website and StarTrek.com. Both look to be at least partially renderings rather than photos; although the first here might possibly be a photo of the figurine mocked up on a digital base? 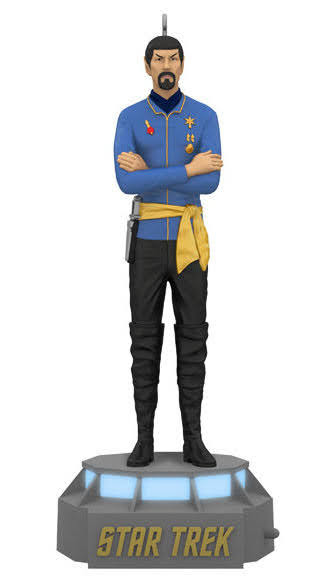 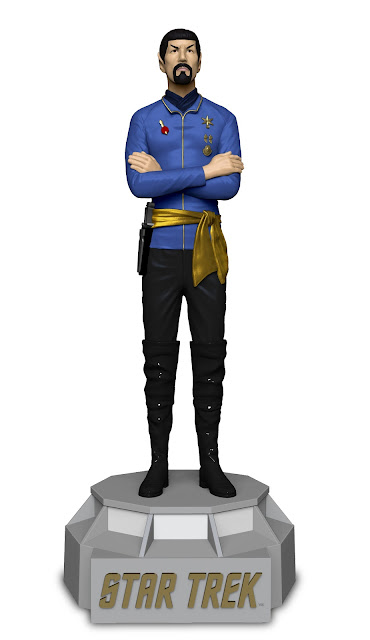 There's just one image of mirror-Chekov so far, via StarTrek.com, which also looks to me like a photo of the figurine on a mock-up base: 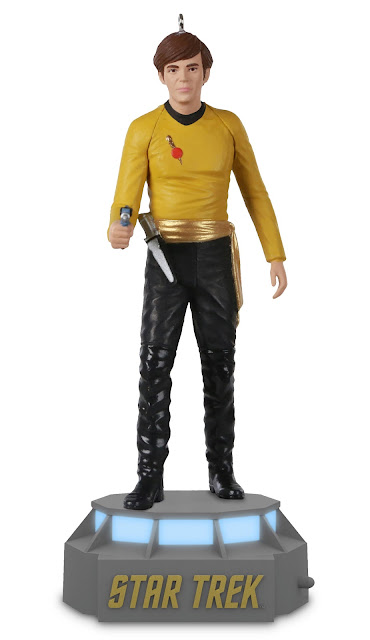 According to the Dream Book Spock will be arriving in July, but Chekov not until October. Also available again from July will be Kirk(ad), Uhura(ad), Sulu(ad), and the USS Enterprise tree topper(ad) from last year. Here's the range so far (the delta decoration is also a remote for the topper): 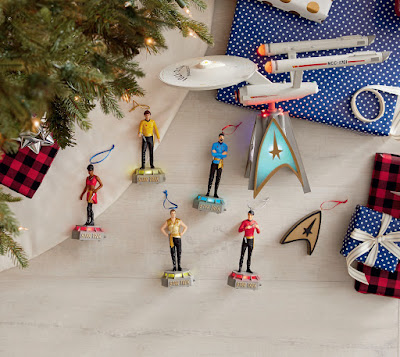 Still to come in 2022 are Scotty and Doctor McCoy.
Here's a video of the 2020 range in action. This year's new figures will allow the story to expand:


For a look back through Hallmark's previous Star Trek Keepsake decorations, see my Trek Collective list, or browse back through my Hallmark tag to see previous reports on all their Star Trek products.