With the first issue of Eaglemoss' new Star Trek Universe: The Official Starships Collection(ad) due to ship to subscribers in the next week or so, they have sent subscribers a pamphlet to introduce the series, including teases of possible future ships in the series.

The series will include ships from all the in-production live action TV series, with Picard dominating the first ten issues or so, before switching tracks to focus on Discovery season three. The new promo material teases several ships from Discovery not previously seen in promotion for the collection, and also names some of the more obscure background ships for the first time. 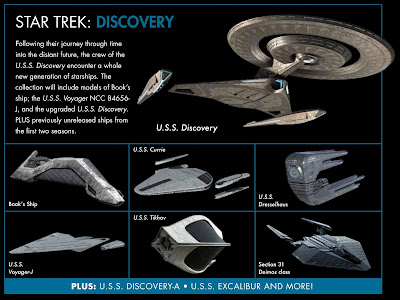 Newly added to the future issues list from these images are Book's ship, the seed ship USS Tikhov, and one of the lesser seen 32nd century Starfleet ships, the C-shaped USS Dresselhaus (presumably named for the nanotechnologist Mildred Dresselhaus). Also named for the first time is the four-nacelled USS Currie (there are a lot of people named Currie, so take your pick for namesake!). The text also promises a USS Excalibur (class unknown).

Interesting this promo also highlights the intent to go back to revisit Discovery seasons one and two, where a handful of ships remain left out of the Discovery starships collection that this new Universe collection supersedes - Specifically it previews yet another of the Section 31 fleet, the two-nacelled Deimos class.

Also previewed are Picard ships. Most of these have already featured in other promotional materials, though it does confirm all the major Romulan ships in the series will be coming (just the Romulan work bee not listed yet), and gives us some new images of a few of the ships too. 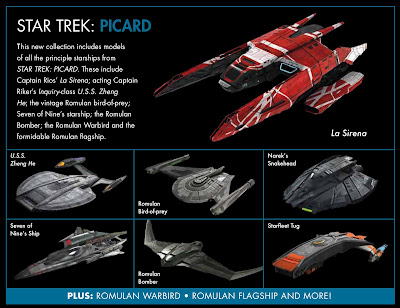 It is worth noting that previous early promotional material for other Eaglemoss starship series have featured ships that never actually materialised even after the series had substantive runs - In the end some of the more obscure ships (notably a whole bunch of Disco Klingon ships) never got made in favour of other ships. So while these might currently be on a list, keep in mind that there are a whole load of other ships from Picard and Discovery already that could be picked first, and more ships will come with future seasons of those shows, Strange New Worlds, and whatever else comes later too.
In other Eaglemoss updates, the Picard refit Romulan Bird of Prey is now up for pre-order on Eaglemoss' webshop(ad), and the listing includes a new image of the model (still not showing us the painted-bird bottom, the meanies!) - This is expected for release in late-May: 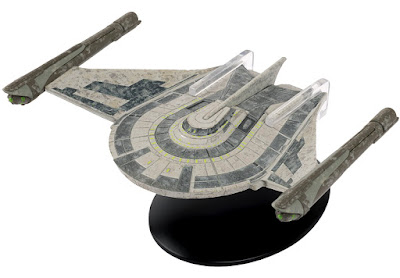 The following issue was also part of the latest round of Previews solicitations, so we also have a new image of Seven of Nine's Fenris Ranger ship(ad): 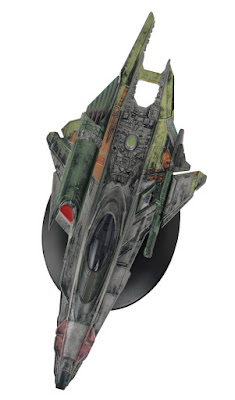 To get hold of all the ships in the series, by subscription see Eaglemoss' Star Trek Universe collection page for the US(ad), UK(ad), Germany(ad), and other parts of Europe(ad). Alternatively look for individual releases via the Eaglemoss' web-shop in the US(ad) and the UK. For discounted pre-orders, check Things For Another World(ad) too, who normally offer a 20% pre-order discount.

To keep track of the whole Star Trek Universe collection, see my Trek Collective list. For more Eaglemoss updates, check back through my Eaglemoss tag, or for starships coverage in general see my ships or model ships tags.