Lots of Star Trek TV and film updates recently, so continue below for a round-up of the latest from Strange New Worlds, the Khan prequel miniseries, another potential film pitch, a couple of lost Star Trek projects, and a new documentary series!

First up, CBS have announced several new cast members for the Captain Pike series Strange New Worlds, and they did so with this upbeat video:

StarTrek.com have provides some little biographies for each of the new actors. They are:

Babs Olusanmokun’s notable television credits include his roles in Netflix’s Black Mirror, Marvel’s The Defenders, HBO’s Emmy-winning miniseries The Night Of and History’s 2016 remake of the miniseries Roots. His film credits include the upcoming and highly anticipated Dune and Wrath of Man.
Christina Chong can currently be seen in the live-action adaption of the classic Hanna-Barbera cartoon, Tom and Jerry and in The CW’s Bulletproof. Chong’s other television credits include Black Mirror, Doctor Who, the BBC’s Ill Behaviour, the ABC event mini-series Of Kings and Prophets, the hit BBC series Line of Duty, SYFY’s Dominion, Halo: Nightfall and Fox’s event mini-series 24: Live Another Day. Film credits include Christmas Eve, opposite Patrick Stewart, and Johnny English: Reborn.
Celia Rose Gooding starred as Frankie Healy in Jagged Little Pill, a musical inspired by Alanis Morissette’s award-winning album, until the Broadway shutdown in 2020, and received a 2020 Tony Award nomination for Best Featured Actress in a Musical for her work. Past theater roles also include Urinetown and Fame.
Jess Bush starred as Helen in the indie feature Skinford and appeared in the recurring guest role of Kendall in the Channel 10 series Playing for Keeps. Bush also played the role of Bella in the Australian series Halifax - Retribution. In addition, Bush went on to guest star on the ABC series Les Norton opposite Rebel Wilson and David Wenham.
Melissa Navia’s recent television credits include a recurring role on AMC’s critically acclaimed series Dietland and guest roles on Showtime’s Billions and Homeland. In March 2020, she made her Off-Broadway debut in the much-applauded Bundle of Sticks at INTAR Theatre.

An exciting bunch of talent! There's no news yet on whether other members of the extended Enterprise crew we've met already in Discovery and Short Treks might be returning alongside Pike, Spock, and Number One. But news will no doubt be dripping out as production continues.
In other Trek TV updates, Deadline report Kevin And Dan Hageman, the creators of the forthcoming Prodigy animated series, have been signed up CBS Studios in a new overall deal to create further projects for CBS. Surely a positive sign at CBS's confidence in their work on the Trek series.
Meanwhile TrekMovie have an update on Nicholas Meyer's Khan prequel series, which has been in suspended animated for some time now. Meyer puts it down to changing format priorities, but hasn't given up hope yet:

Well, I don’t consider it dormant because I think it’s it’s a terrific project. I think what happened, or up to a point what happened, was that the business model for streaming was changing really fast. And what was originally commissioned as a three-hour or three-night event, by the time I finished writing it, three hours was not enough. They wanted longer stuff. And somewhere between those two imperatives, the thing sort of fell between two stools. And I still don’t know why they’re not doing it, even if it’s to say, ‘give us ten episodes instead of three or whatever.’ I don’t know why.

But that's not all, Meyer has also told TrekMovie he has been working on a pitch for a new Star Trek movie as well, and has taken it to all the people who could make it happen:

That happened last year, and right now he's still waiting on news on whether it might yet go anywhere.
Thinking back to Khan, Fact Trek recently uncovered the Meyer series is at least the second time a Khan prequel has been under consideration. In 1983 Paramount looked at making The Rise of Khan, and had a full script from John Hughes. Documents Fact Trek uncover give the following synopsis:

Ingenuous young JOHN PIERCE, first mate of the spaceship Wraith, is thrust into command when CAPTAIN DUFFY dies in deep space.  Before dying Duffy gives Pierce a computer chip to deliver back on Earth to anyone giving him the password "Freedom".  This is overheard by VICTOR ISHAM, navigator, a spy for Earth's tyrranical [sic] government.  When the ship docks, Isham reports to clever, devious LT. KHAN, proud product of genetic engineering.  Khan desires Pierce's betrothed, beautiful MERCEDES.  When Pierce delivers the chip, Khan's minion STEELE has Pierce arrested and sent to the prison planet Thanas.  Khan tells Mercedes that Pierce is dead, and she becomes his wife.  Khan uses the information from the chip to play the rebels against the government, to his own advancement.
In a cell on Thanas, Pierce meets another prisoner, wise old FARIA.  They burrow toward freedom as Faria teaches Pierce diplomacy, languages and the arts of combat.  During these years Khan becomes emperor, and he and Mercedes have a son, AEGIS, who is sixteen by the time Pierce and Faria complete their tunnel.  The old man dies before they can escape, but he gives Pierce the map to a huge treasure hidden on another planet.  Pierce escapes, recovers the treasure with the help of rascally CAPTAIN THORPE and recruits a fighting force on Tau Ceti, with which to gain revenge.
As "governor" of Tau Ceti, Pierce returns to Earth (with Aegis, whom he has captured along the way).  Welcomed by Khan, who has designs on Tau Ceti, Pierce quickly engineers the downfall of Isham and Steele.  Recognized by no one but Mercedes, who simply begs mercy for Aegis, Pierce steals Khan's spaceship and Mercedes, goes to Thanas and releases all the prisoners.  Khan follows him and Pierce defeats him in single combat, then sends him out to the stars in suspended animation.  As for Mercedes, too much has come between them; Pierce leaves her and blasts off with an Amazon warrior named ILLIUS…

Honestly, doesn't sound like we missed out too much with this not going ahead! For more on the story of how this was uncovered, and what became of the project, check out Fact Trek's article. 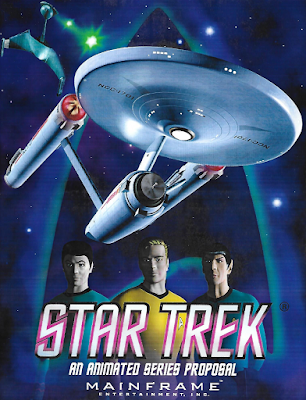 Another bit of lost Trek also resurfaced via Trek Central, who have uncovered the history of CG animated TOS series Mainframe were hoping to make in the 90s! They planned to remake and expand the original Star Trek: The Animated Series episodes. Here's their pitch:

Mainframe proposes to produce a television series continuing the original adventures of Captain James T. Kirk and the crew of the Starship Enterprise (NCC-1701). The new series will reunite the original ‘young’ crew by the use of modern technology and production methods developed by Mainframe over the last 5 years.
The new series will incorporate a ‘virtual’ cast performing in 3D computer generated sets, bringing together the advantages of new technology with the sensibilities of traditional film making.
In the early Seventies, ‘Filmation’ produced 22 one-half hour traditionally animated episodes based on the original ‘STAR TREK’ franchise.
It is our intention to take these ‘Filmation’ episodes and use them as a starting point to craft the new series. By using the original recordings of the core cast, carefully re-working the scripts, and rerecording all incidental characters, we believe that it is possible to bring the storylines up to the high standards expected of a ‘STAR TREK’ series today.

For the background on the project, and its ultimate fate, check out Trek Central's article looking at what happened.

Finally, also about to dive into Star Trek's history is the History Channel, who have commissioned an eight part series all about Star Trek! Deadline report The Center Seat: 55 Years Of Star Trek, will be produced by The Nacelle Company and their director Brian Volk-Weiss, the makers of the excellent series The Toys That Made Us. Also involved as showrunner is Ian Roumain, and exectuvie producers include Gates McFadden, Cisco Henson and Mark Altman.

How great to get an entire series dedicated to Star Trek history, and by such promising talent too. They promise to cover everything from the inception of Trek up to the modern series, and things that sometimes get forgotten like TAS and Phase II. I hope this gets decent distribution around the world!

For more Star Trek TV and film updates, check by through my coverage on the TV and movies tags.