Mego were among the first makers of Star Trek toys, and the first to make any Star Trek action figures. They produced quite an assortment of figures and playsets, along with various human-scale role-play items. But like any toy company they also worked on several ideas that never quite made it. Some photos of prototypes have appeared on Ebay(ad) giving us a rare chance to check out some of those lost releases. Continue below to check them out.

So first up is this really impressive USS Enterprise bridge AND sickbay playset! This is scaled for use with Mego's 8-inch action figures, so would be a pretty substantial piece. The mini sickbay, encased in bridge-style railings is accessible via a turbo lift that runs up the support that holds up above the bridge. 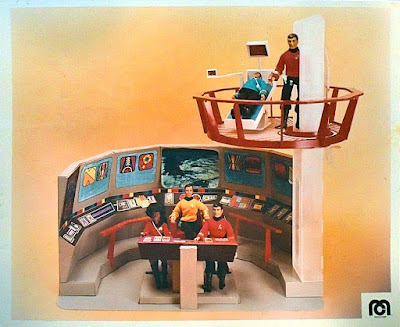 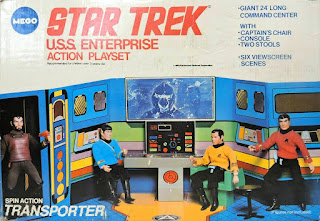 I don't think there's ever been a close-to-screen accurate toy TOS bridge playset. Playmates later prototyped one too, but also didn't bring it to market. So alas this remains an unrealised concept.
Mego didn't give up though, they released a bridge playset(ad) of a much different concept, with zany bright colours  and free-standing furniture that make it look more like a vibrant lounge than the bridge! This set had plenty of innovation of it's own though, including a built-in and "functional" transporter alcove and changeable viewscreen images. Perhaps most importantly for it's toy nature, it could also be closed up and used as a carry case for your Star Trek crew, making it ideal for exploring strange new worlds!
The next product from these rare photos is completely wild; a bubble-dome enclosed one-man tank-tracked vehicle, seen here driven by Spock laying on his front! Apparently this would have been battery operated, and was called the Vulcan Explorer. Someone in the design team was definitely feeling creative when they came up with this one! 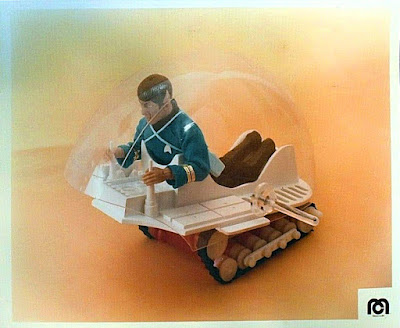 The final image in the lot pictures several of Mego's TOS alien action figures(ad). These all did get released. Pictured here is the second wave of Aliens, featuring faithful renditions of an Andorian(ad) and Romulan(ad), a sort of Talosian called Talos(ad), and Mego's rather unusual take on a Mugato(ad). 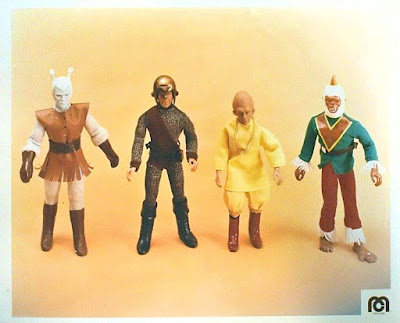 The back of the card for first wave of Aliens, pictures many of Mego's other TOS releases, including much of the main crew along with the other aliens, one of their wilder concepts, the Mission to Gamma VI playset(ad), a could of their different phaser games(ad), working walkie-talkie communicators(ad) which can work in conjunction with the separate Command Communication Console(ad), and a tricorder(ad) that is in fact a working audio cassette recorder!
Also on there though is another product that doesn't seem to have made it, the humble tribble. Of course many others have since followed from other makers, so in this case, not a huge loss. 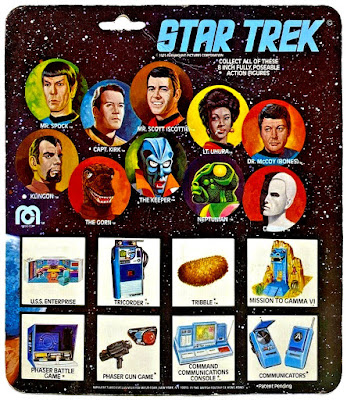 Following their TOS TV-era inspired releases, Mego moved on to The Motion Picture, with a large range of toys to accompany the film. This time they released smaller 3¾ scale action figures(ad) and a corresponding bridge playset(ad). But that bridge was meant to be joined by the cabin section of the Vulcan shuttle, which would be able to dock with the bridge via the airlock door to deposit additional characters to your playtime adventures. You can get a fairly good view of that un-released starship playset from the pages of Mego's 1980 Catalog below, and see the two sets docked in an advert (that someone was good enough to get onto Memory Alpha) too: 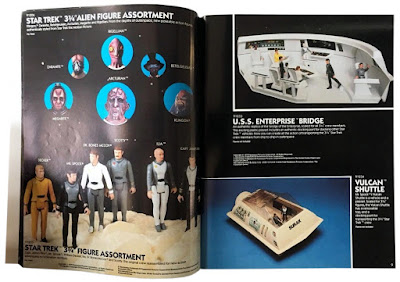 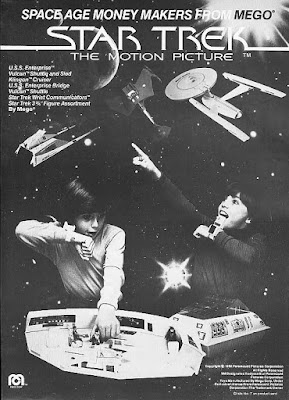 Better yet, you can see that docking in action as part of the Mego Museum video looking at some of Mego's lost toys here:


Mego also released larger 12 inch Motion Picture action figures(ad), and that video also notes sculpts were made for a Zaranite and Rigellian - The latter is better known as Saurian, ie, we nearly got a big Linus figure! Both species were released among the impressively diverse range of smaller scale alien action figures in the Motion Picture range at least.
That video also shows of some prototypes for Star Trek branded science kits Mego were considering: 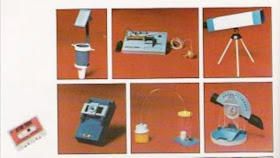 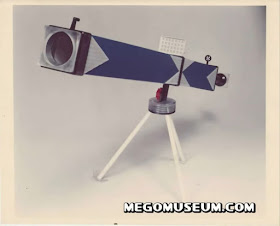 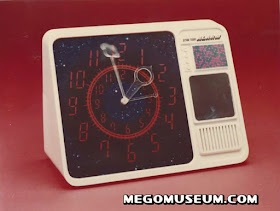 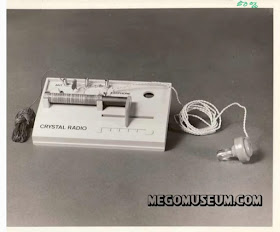 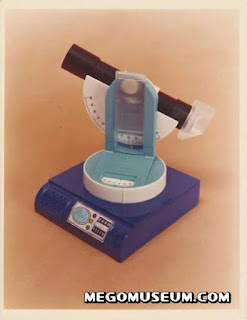 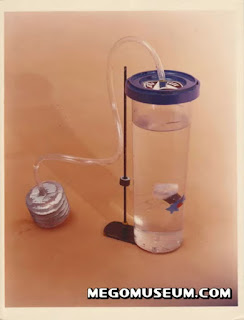 This concept, of practical and educational science based toys, wasn't entirely unexplored in the Star Trek range, as Mego did market a nice "Intergalactic Planetarium"(ad), and the amazingly named "Star Trekulcator"!(ad) 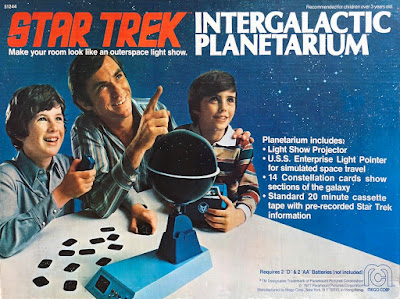 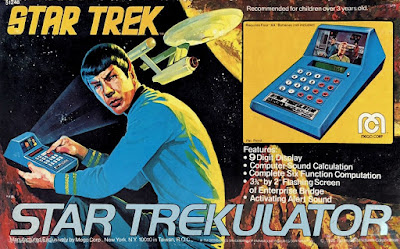 Skipping ahead a few decades, starting in 2007 Diamond Select Toys and EMCE began a Mego revival, and reissued most of the TOS TV era figures, and gradually started expanding the collection to previously unreleased characters. These figures were mostly released in two-character waves, and two such waves announced were to be Captain Pike and Vina as an Orion, and Nurse Chapel and the Salt Vampire. However these logical pairings ended up a bit jumped, with only Pike(ad) and the Salt Vampire(ad) getting a release, together, leaving Vina and Nurse Chapel unreleased. 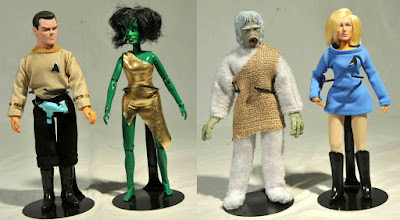 After a few years hiatus, DST hoped to rekindle the line again, with planned re-issues of their existing range, plus some new characters. Two planned releases were a new version of their Cheron figure(ad), with the black and white sides swapped, making it Lokai rather than Bele, plus a generic redshirt, which was planned to be available as two variants, with either black or brown hair, and one with officer rank stripes. Alas the entire plan to relaunch the relaunch was shelved due to not taking enough orders. 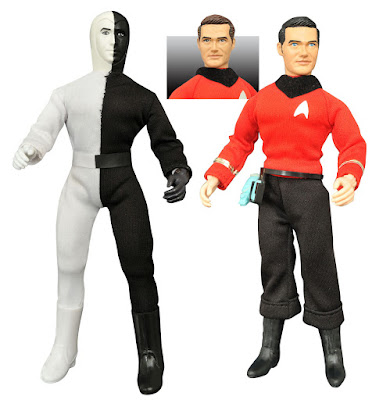 That left the door open for Mego to relaunch themselves a few years ago, and Star Trek releases are now a regular feature. They're focused entirely on the nostalgic adult collector market for their figures, so while it's unlikely they'll be picking up most of the unreleased things mentioned above, I'd think the likes of Chapel and Vina have a good chance at some point.
In fact they have already filled one gap. During DST run, they also released a couple of TNG figures, Picard(ad) and a Borg(ad), and the packaging for those seemed to suggest Data and a TNG Klingon would be part of the range too; but they never materialised. Mego's new range though just recently released a Data figure(ad), finally bringing to life the promise of the previous packaging. 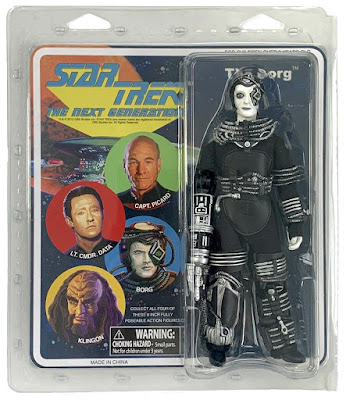 To keep track of all the new Mego releases, have a look back through my Mego tag, or for a wider assortment of figures, check my action figures tag. For a comprehensive look at the classic Mego range, check out Mego Museum. And for a look back through the DST revival range, see my own Trek Collective List.