ViacomCBS have released the first image from the forthcoming animated Star Trek series aimed at younger viewers, Prodigy, revealing one of the most diverse cast of characters of any Star Trek series, which for the first time will have a main crew that's all aliens! Check them out below, plus some other Trek TV updates. 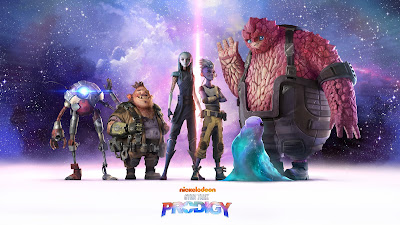 There are no additional details of these characters yet, but from we we can see, we've got a non-humanoid robot, a shorter humanoid with a cybernetic arm, a tall blue-skinned humanoid, with really interesting metal-work in their costume, a purple skinned humanoid, a blue-blob creature, and an enormous crystalline-skinned being. You can read from their expressions and attire a diverse grouping of attitudes and backgrounds, sure to cause some drama when the series begins later this year.
These are "outcasts", which together form "a group of lawless teens who discover a derelict Starfleet ship and use it to search for adventure, meaning and salvation." Part of that salvation will come via the leadership of Kathryn Janeway who returns in this series - It's not yet known when it is set (in relation to Voyager), or how she interacts with this crew of youngsters.
As part of ViacomCBS's Investor Day event today, they've released a new trailer highlighting how all of Trek is coming to Paramount+, including Prodigy, which will be available on Paramount+ (in the US) as well as Nickelodeon.


Speaking to The Hollywood Reporter, Star Trek producer Alex Kurtzman gave some interesting hints at the future direction of Trek, animated, for kids, and otherwise:

There are other Trek stories to tell in the kids space. Hopefully, in success, this is going to be the first of many in that space. In our live-action world, one thing we hear a lot from fans is how much they've liked that we freed ourselves from canon in Discovery and jumped forward into a new timeline with a whole bunch of new worlds and new characters. What that speaks to more than anything is the spirit of exploration that is at the heart of Star Trek. Whatever we do next is probably going to be in different timelines and different areas of the universe that haven't been explored before; a show that hasn't been dedicated to them yet.

Speaking to Variety, with Paramout+'s  Julie McNamara, they also suggest that while there are plenty of Star Trek projects in the works, they're not aiming to flood us with much more all at once, waiting instead for existing series to wane before launching more new series (sorry Section 31, still pending):

Kurtzman and McNamara say there are still “conversations” about a new “Star Trek” series around Michelle Yeoh’s Philippa Georgiou and the mysterious Section 31, and there are other “Trek” shows in development that haven’t been previously announced. But they emphasized that the current five-series slate will likely not expand further until at least one of the shows runs its course.
“We’re very careful about curating the pacing — the number of shows at any given time — and what those shows are, so that we make sure that it’s always exciting when there’s a new track show coming out,” says McNamara. The rough schedule, she says, is to debut “a new ‘Trek’ a quarter” on Paramount Plus.
“Whether there’s a show that comes up that feels additive and we should add that into the mix, or waiting for attrition of another ‘Trek’ show, we feel good about where we are,” she says. McNamara said that by “attrition,” she means either a “Trek” show “aging out” naturally, or — in an allusion to 80-year-old “Picard” star Patrick Steward, “perhaps an older lead is only committed to a certain number of seasons and and therefore we move on from that.”

You can find all current and future Treks, in the US at least, on Paramount+(ad), just as soon as it gets renamed from CBS All Access(ad). In Canada look to Bell Media services, while in the rest of the world Trek is split, so far, between Netflix and Amazon Prime Video(ad).
Meanwhile to keep track of all the latest Trek TV updates, check back through my TV tag, or those for each series: Discovery, Picard, Strange New Worlds, Lower Decks, Prodigy, Short Treks.