Star Trek Online are honouring the USS Titan, with the introduction of a new successor class to the Luna class, the Titan class. Continue below to check out this cool new ship, plus lots of other STO updates, including a new variant of the Walker class, mirror universe ships, updates of other classic designs, and the latest in the ongoing Klingon saga that is currently the focus of the game.

The new Titan class, a "Science Destroyer" is meant to be the 25th century descendant of the USS Titan's Luna class. Here's how STO describe it:

Named after the legendary ship commanded by William T. Riker, the Titan Class Science Destroyer is a little like Riker himself. It's a balance between exploring the galaxy, and gearing up to fight when necessary. As a Science Destroyer, the ship has two modes it can switch between, Science and Tactical. It also is equipped with a console designed to disable enemy systems, effectively taking them out of the fight for a brief time. She also can be loaded with an advanced subspace communication device, allowing you to summon the aid of your faction's flagship at a moment's notice.

The Titan class comes with the "It's Another Enterprise" trait, which summons the support of a large allied ship:

It also comes with a console ability, the Opening Salvo, which can be added to other ships too:

The design of the ship seems overall a bit flatter than the classic Luna class, which makes it seem a little reminiscent of the USS Discovery's Crossfield class to me. The Ships of Star Trek Instagram shared several images showing off the new design, including these: 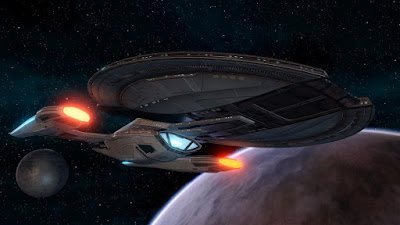 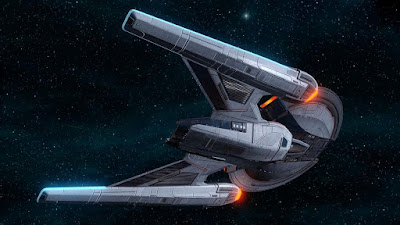 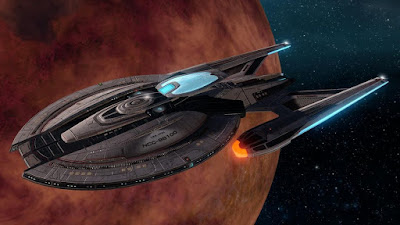 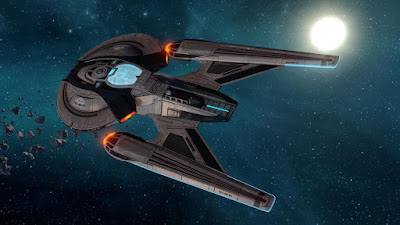 And the designer, STO's Hector Ortiz, also shared their concept art for the ship: 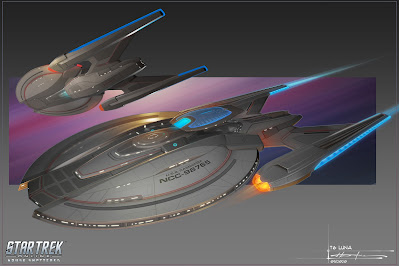 Alongside this new variant, STO have also taken the opportunity to remaster the original Luna class. The Ships of Star Trek Instagram shared some images of that refreshed look too, including the following: 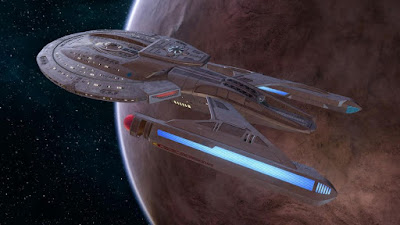 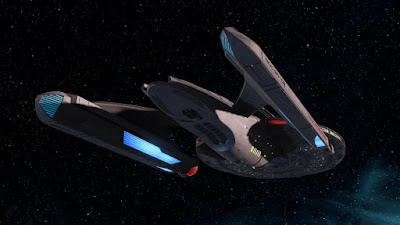 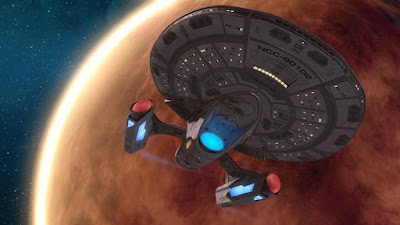 The new Titan class will be available from STO's Zen Store from the end of the month, check out their announcement for full specs.

Another 25th century remake is already available via the recently introduced Legendary Discovery Captain Bundle. This bundle boosts a character to max level, and gives them the Shenzhou class (or Shenzou as it's spelt in STO's announcements, but not on the actual ship art a little oddly), which is a 25th century redesign of the Walker class, best known as Captain Georgiou's ship, the USS Shenzhou.
In-universe this is meant to be the latest in the Yard 39 project, which has seen 25th century Starfleet create new designs inspired by the various 23rd century Starfleet ships seen in Discovery - Following the discovery of an abandoned fleet of these seemingly forgotten ships. Here's STO's tale of how this particular design emerged:

With the advent of the Shattering of the Klingon Empire, the Federation's engineers found their projects with the Khitomer Alliance on hold or cancelled. However, Starfleet is unlikely to let talented engineers go to waste, and sent them to work on the Yard 39 project, resurrecting the ships of the 2250s with modern technological capabilities. The first ship to result from that hard work is the Walker Light Battlecruiser. The Walker class is a fairly famous ship in Starfleet history, and previous attempts at ressurecting her have been made, including the Georgiou class. However, this is the first ship to marry her classic form and functionality with 2411's latest, bleeding edge tech. The Captains lucky enough to command her will explore the frontiers of the galaxy like never before. 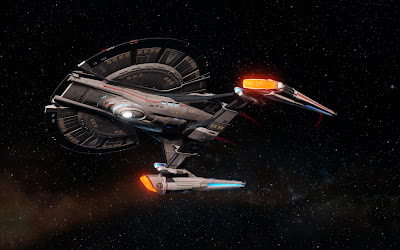 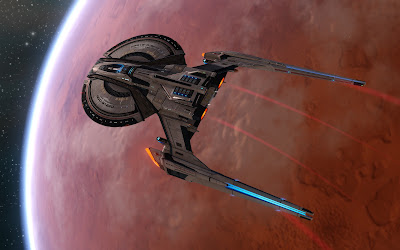 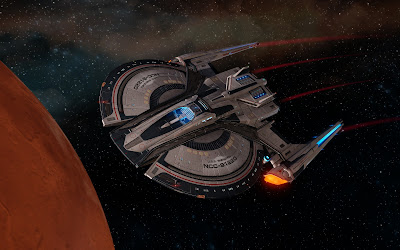 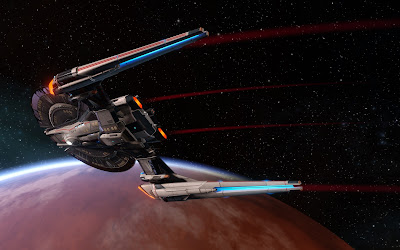 The bundle also includes other related designs, the original Walker class, and the TOS-movie-era styled Georgiou class. You can find full specs of the new Walker class on one of STO's pages, and separately full details of the bundle it comes in.

Looking for more new Disco ships? Well also fresh to the game since last month, is the "Mirror Warship", bringing to life the on-screen schematic of the USS Defiant seen in Discovery. After a century of Terran modifications, the Defiant sports a new look, which STO have revealed in full for the first time. In addition to the kinky nacelles and saucer cut-outs seen in the schematic, this version of the Defiant also sports the usual Terran hull markings, in red for this particular ship.

The Mirror Warship comes with a couple of extra abilities, including the starship trait the Terran Goodbye:

Whenever you defeat a foe, you will gain a temporary boost to critical hit chance and accuracy rating that lasts for several seconds and stacks up to 3 times.

And it too has a console which you can fit in other ships, the Interphasic Rift Generator

When activated, this console generates a naturally closing, smaller version of the Interphasic Rift that doomed the U.S.S. Defiant and sent it to the Mirror Universe. Despite its smaller scale, it is no less devastating to foes who are in contact with the rift, as their ship will suffer from extreme physical stresses, power fluctuations, and difficulty moving, if they even have the power to.

This new ships is available as one of the potential prizes in the Infinity Lock Box. Alongside, several new items were added to the Lobi Crystal Store, a wide range of different 22nd century weapons and tech (reflecting the Defiant's history) - You can find out more about those on STO's announcement post.

Additionally the bundle includes a fun new ability to unlock Mirror Universe registries on any ship you have: ISS (Imperial StarShip) for Starfleet starships,  AKS (Alliance Klingon Ship) for Klingons, or ARW (Alliance Romulan Warbird) for Romulans.
Find full details of the mirror bundle in STO's announcement, and separately details of the Galaxy Dreadnaught.

Still need more ships? Well STO's ongoing efforts to remaster classics has continued lately with the Prometheus class getting an update. the Prometheus Ships of the Line bundle pulls together previous Prometheus variants with the updated classic look.

Similarly the Nebula Ships of the Line bundle offers up variants of that classic, with new and improved look for the class in the game. This includes the obvious different sensor pods, but also some extreme screen-accurate customisation options:

Eagle-eyed ship afficionados will have noticed that there are two versions of the Nebula with subtle differences between them: the physically-built studio model as seen in Star Trek: The Next Generation, and the CGI model built for Star Trek: Deep Space Nine and Voyager. The CGI model had more windows on the saucer and a galaxy-class style engineering hull, and now Nebula captains can fit new parts inspired by the CGI model to their ship in addition to the existing parts based on the physical model variant!

More new ships enter the game, but not ones you can take away and play with for now it seems, in the latest Task Force Operation, Synth Wave. This lets players re-enact the Synth attack on Mars, as seen in Picard. 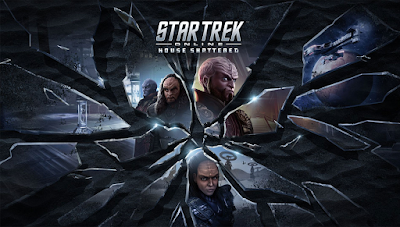 That new mission is just one part of the latest update to the game, and the next stage in the Year of the Klingon program. House Shattered includes the new TFO, alongside new story content. Here's a trailer:


And here's how STO outline the new story developments:

First, the House was Divided, now it will be Shattered. Following the events of June’s House Divided, Captains found themselves on the run, accused of a crime they didn’t commit. Chancellor J’mpok of the Klingon Empire has gone mad with power and jealousy, partnering with Aakar, Gowron’s grandfather, to devastate the peaceful planet of Khitomer. Attempting to destroy all his enemies at once, he framed this crime on the renegade Klingon Matriarch J’ula, legendary General Martok, and you. Now, this ramshackle alliance must find a way to clear their names and try and set things right. With help from the mysterious Witch of Nimbus III, Adet'pa, they might do it, but even that won’t set everything right. If J’mpok is removed from power, there is nothing standing in J’ula’s way of seizing control – and she may be no better than the Mad Chancellor.
House Shattered is our latest story update to Star Trek Online. In it, you’ll find a brand new episode, “Partisans,” where Captains can team up with Martok, J’ula, Adet'pa and the crew of the Orion Syndicate ship The Coldstar, in a race to find the evidence to clear their names. J.G Hertzler as Martok, Robert O’Reilly as Aakar, and Rekha Sharma as Adet'pa all return to Star Trek Online in this brand new adventure that advances the story began in House Divided.

Here finally, are a few images from the new storyline too: 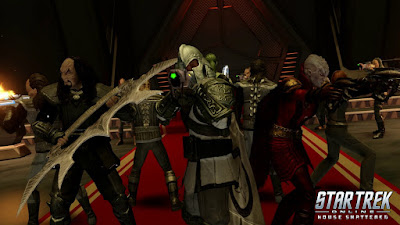 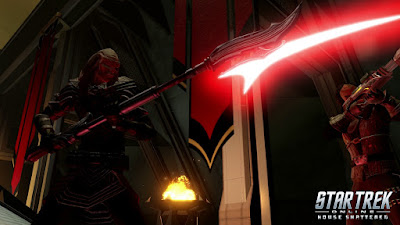 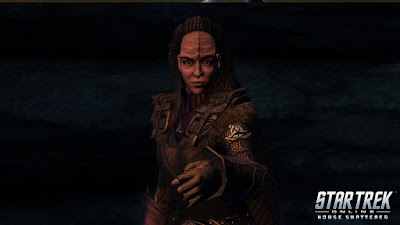 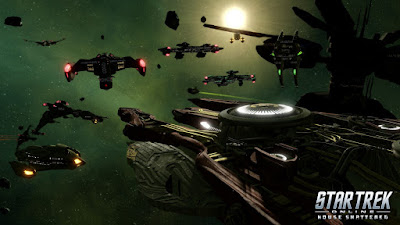 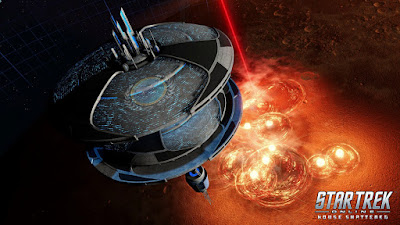 For more Star Trek Online coverage, check back through my STO tag.