IDW have revealed their Star Trek comics for February, which spanning TOS, TNG, and Voyager include two new books, and reprint of a classic. Continue below for all the details.

Written by Brandon Easton, with art by Silvia Califano.

As the crew of the Enterprise moves toward an uncertain future, one of their own will be pulled into a violent past! While investigating a mysterious structure on Vulcan, Spock vanishes. As the crew tries to find him, Spock must fight to survive as he navigates the painful past of his home planet. The final voyages of the original crew continue in this time-hoping adventure from writer Brandon Easton (Transformers: War for Cybertron, Thundercats) and artist Silvia Califano (Star Trek: Year Five, X-Files: Case Files)

From the title, covers, and snippets in the blurb here, I think we're going to see some of the Vulcan/Romulan schism. through the eyes of time traveling Spock. Cool!

The book is offered in two covers from the regular artists for the series, and both have been revealed already. The main cover by Stephen Thompson features a traditionally Vulcan-clothed Spock under a looming Romulan emblem (TrekMovie released the final cover, but you can see the line art on Previews). There's also a retail incentive by J.J. Lendl, which gives us a retro poster for the story, and also features Spock, among Vulcan and Romulan iconography. 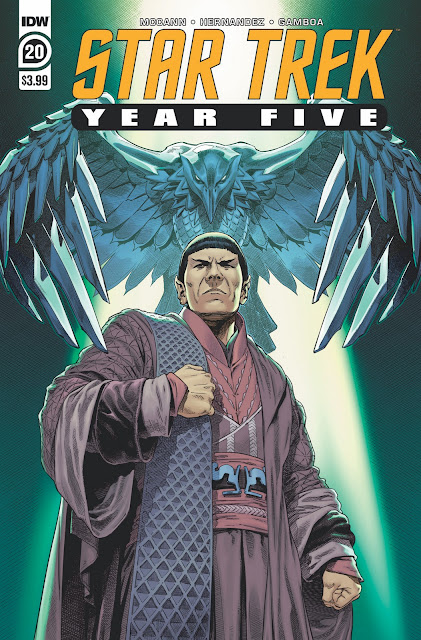 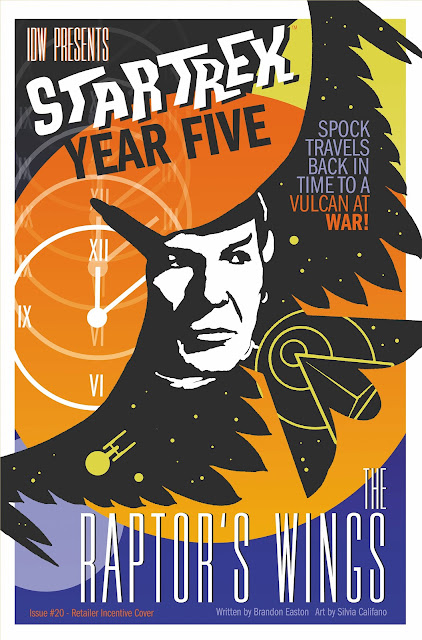 Written by Dave Baker, with art by Angel Hernandez.

The battle may be over, but the worst is yet to come. Torn between her growing attachment to an alien race and her new commitment to the Prime Directive, Seven of Nine must choose between altering the course of an entire society and her place aboard Voyager in the conclusion to this story set during Voyager’s amazing fourth season from writer Dave Baker (Action Hospital, F*ck Off Squad, Star Trek: Waypoint) and artist Angel Hernandez (Star Trek: Picard Countdown, Star Trek/Green Lantern).

This is the final issue in what is IDW's first ever Voyager comic miniseries. Like other books in the series it is available in three different covers, two of which have so far been revealed. The main cover is by Angel Hernandez, depicting a dramatic moment with Seven, Janeway and the new aliens featured in this series. There's a B photo cover, featuring Tuvok. And thee will also by a retail incentive cover by Jeffrey Veregge. 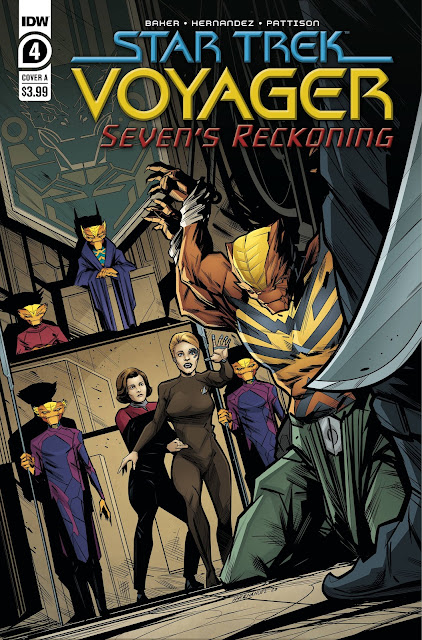 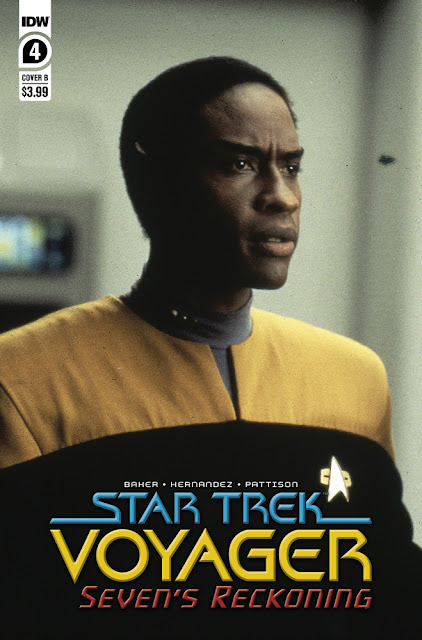 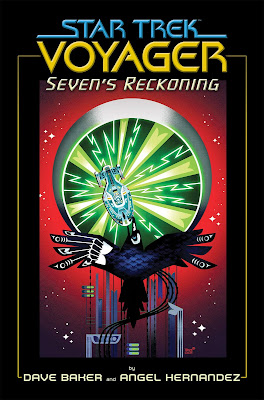 While Veregge's cover for this issue hasn't been released yet, his artwork does appear to be set for use on the omnibus of the series(ad), which is due out in July 2021. here's the blurb:

Join Captain Janeway and her crew on a mission full of shocking twists in the first new Voyager comics story in over a decade!
A chance encounter with a reptilian alien race draws Seven of Nine and the rest of the U.S.S. Voyager crew into an ancient class conflict that's on the brink of exploding into all-out war! Set during Star Trek: Voyager's amazing fourth season, Seven finds her newfound humanity in conflict with her commitment to the Prime Directive. When she finally makes her choice, will it have the desired result? And will there still be a place for her aboard the Voyager once the dust clears?
Collects the complete four issue series from writer Dave Baker (Action Hospital, Star Trek: Waypoint) and artist Angel Hernandez (Star Trek: Picard Countdown, Star Trek/Green Lantern).

For more on the series, the writer Dave Baker recently appeared on the Trek Untold podcast, and had a really interesting chat about this series and more, which made me both really exciting to see where this series goes, and wanting him to be coming back to Trek for more pretty soon. Well worth a listen.

Written by John de Lancie, with art by Gordon Purcell

An all-new reprint of the classic TNG story! Q gives Jean-Luc Picard the chance to go back in time to fix one of his biggest mistakes, but the consequences of his actions will create a ripple effect that will threaten the entire Federation! Written by Q himself – actor John de Lancie – with art by Gordon Purcell and a newly painted cover by J.K. Woodward.

This is a reprint of what was original a DC Comics TNG annual, published back in 1990. The new J.K. Woodward is based on the original cover art by Jerome Moore. 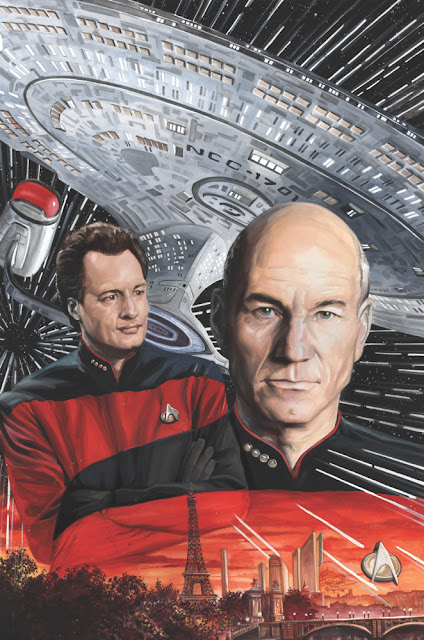 To keep track of all the latest Star Trek comic releases, hit the comics button on my 2020 or 2021 schedule page. You can also find reading lists for several Star Trek comic series on my Trek Collective Lists site.