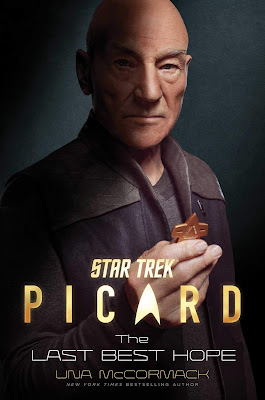 Alongside the first season of Picard, Simon and Schuster delivered The Last Best Hope, the first Picard tie-in novel, which was written by Una McCormack. The book takes us through the entire Romulan rescue mission; showing Picard's work to tirelessly to build up the resources necessary to save the Romulan people, only to have wider events undo that mission, and Picard's entire sense of person, bringing him the place where we find him as the series starts. The outline of that we saw in the TV series; this book files in the details.

This was also the first hardcover novel Star Trek novel for many years; did it earn that prestige format? Well I think yes, absolutely, wholeheartedly, in fact I would go so far as to say this is possibly the most impactful Star Trek tie-in work there has ever been. Continue below for my thoughts on why.

McCormack is an author who has consistently written some of the best Star Trek novels out of the many hundreds that have been produced over the years - Her retelling of the tragedy of Cardassia in The Never-Ending Sacrifice a personal favourite, and that barely touches upon her ongoing project to bring the Cardassians to life vividly through a series of novels focused on Garek, or her remarkably lovably take on Doctor Pulaski. Having read and loved all her previous books I had high expectations she would deliver something at least enjoyable. But being the first tie-in to a new series I was also expecting something maybe dancing around the edges of the series, without really knowing yet what Picard was all about. While Discovery tie-in writers have been gifted unprecedented support in aligning their works to the series while in production, they've still ended up mostly delivering slightly distant prequels (none the less enjoyable I might add). Well my expectations were wholly met on the authorship point, but blown out of the water on the latter concern - The Last Best Hope is perhaps the most literally tied-in Star Trek novel ever written, building on backstory in the series itself just touched upon, to create so much more depth and understanding of the place where we find Picard, Raffi, the Federation, the Romulans, and so much more, in the TV series.

The time jump from Nemesis to Picard means the series can establish a new status quo, and then get on with telling the new story it wants to. But behind that new story we know there are years of stories not seen, and some big questions that the TV series only really sketches out: What took Picard from unceasingly idealistic Starfleet captain to despondent vineyard roaming retiree? How did the Federation come to have an army of synthetic slaves, and what would lead an idealistic society like the Federation to ban an entire technology and indeed form of life? How did the great Romulan empire crumble? The Last Best Hope answers all these questions.

It also shines a spotlight on the world of today, showing us all too familiar stories of unwanted refugees, climate change denial, and inward looking privileged societies. In fact in these aspects, having the time to really dive into the subjects and explore the consequences I think the novel does a much stronger job of reflecting on issues than the TV series did; on screen they are used more to set the scene, to tell us why Picard is where he is, but then to get on with his current adventures. On the page those critiques of the contemporary issues are fleshed out, and hit much harder as a result.

On a similar note, the character exploration here really helps flesh out what we see on screen, and as a result makes the character beats from the series much stronger. My perceptions of two characters especially were substantially enhanced by reading this book (I discuss some plot points in broad strokes from here on; if you want to remain strictly spoiler free, proceed at your own risk):

Raffi's relationship Picard is one of the core threads in the book; the context of seeing their instant rapport and strong working relationship throughout this book makes Picard's walking away from Starfleet, and Raffi with it, so much worse later. More so because we are also witness to the personal toll the Romulan mission took on Raffi, who sacrificed her family to attend to the greater good (I'm sure a relatable situation for many who have lets events far more minor than a civilisation-ending-supernova draw them away from loved ones). When viewing the series with this backstory in mind, the sense of personal betrayal Raffi feels for Picard is powerful, but so too is the strength of their bond that lets their friendship reform over the series. The scene where Raffi meets her grown-up son again also hits hard, knowing exactly how strained their relationship became.

The other character that shone out in this book for me, for being simply delightful, was Zani, the leader of the Qowat Milat. The mission to move her people to Vashti is another of the major threads in the book, trumpeted as a great success amidst the difficulties of the Romulan relief mission. Seeing how Picard leans heavily on Zani's knowledge and counsel gives her extra gravitas when we meet her in the series. She only appeared in one episode in the show, but we see here she was central to Picard's experience during the Romulan relief mission. Much like Raffi, that Picard walked away from her and everyone on Vashti (including Elnor of course) has much more impact, knowing how much they meant to him.

And then there's Picard himself. Even as an advocate for change and boundary pushing in Star Trek, I admit I found it hard (albeit interesting) to see a Picard who had given up. Why, you might ask, didn't he walk straight from Starfleet to his future-Twitter account an rally the people of the Federation in a Dunkirk-style mobilisation of civilian ships? Or lean upon his friends from other great powers? Well here we see the political environment he had to navigate (or indeed for the most part, bathing in his own sense of purpose and hubris, just ignored) that made that, if not impossible, than very improbable. And that really is where this novel hit me the hardest, because it is so crushingly analogous to what's really happening in the world; Picard here faces the brexit of the 24th century, not so much in the specific threat of succession given by some Federation worlds in the book, but in the climate in which his optimism and sense of ethics are being crushed by an inward looking society fed-up with global, nay interstellar, issues always seeming to take priority over their individual problems.

I grew up in the 90s, the era of TNG's perfect future, where "Things will only get better", as the song adopted by the incoming Labour government of the day in the UK promised. And then they didn't; a series of wars unfolded, the fear of terrorism ballooned, the economy crashed, and all the while the ever more obvious effects of climate change have grown. While it once seemed like progressive political forces could overcome the world's woes on the gradual but persistent path to a better world - The world of Star Trek's future - Now we are faced with nationalist, xenophobic, extractionist, neocolonial madness of brexit Britain, and world leaders like Trump, Bolsonaro, Orban, and Duterte. At first glance it seems crazy that the Federation would just give up on the Romulans. But then take a moment to look at our world now: Where a should-be-haven of idealism and progress like Europe lets thousands of refugees drown in the Mediterranean Sea every year. It's not quite so hard to imagine the future parallel of the Federation also taking it's eye off the compassionate ball and focusing inwards on literal first world problems. It's not an easy pill to swallow to see that utopian ideals can be lost, but it's such an important one to see realised now, when that is exactly what we are faced with. Picard the TV series used that as a background to what happened to Picard. But seeing it unfold bit by bit over the pages of this book is a powerful tragedy, and a needed warning that we must do better - If even Captain Picard can falter when faced with those problems, our only hope is to nip them in the bud before we also succumb.

Shining a light on real world issues is one of the greatest traits of Star Trek. The world of 1966 meant doing that in fairly subtle ways (well sometimes, Bele and Lokai...), but we've progressed since then, and so now Picard as a series can speak much louder about issues. This novel lets the full force of those ideas land, expanding on Picard's fall from idealism to surrender; and that makes the impact of his bounce back in the series all the stronger. That is true of so much in this novel, and why I think it is possibly the best Star Trek tie-in there has ever been, because everything that happens in this book layers into what happens in the TV series, making both a great book on it's own, but also a delicious marinade of meaning for the TV series, which seems so much more with the context this book adds. Other Star Trek novels have reflected on real world issues, and expanded on characters masterfully, but I don't think any has ever had such a direct and substantive effect on how you see an entire Star Trek series. This is really something special.


I've not even touched upon above, but the novel also fills in some significant backstory for Agnes Jurati and Bruce Maddox, and related to that what Geordi La Forge was up to in this period; he's the only other main TNG character to play a part here. It introduces a wider crew of characters working with Picard and Raffi, including a Romulan agent that is just one example of the many diverse Romulan points of view and cultures explored in the book, which is rich in Romulan world-building. And the Federation political fallout of the whole affair is explored via a new Federation councillor character, whose provocative positions explain a lot of why Admiral Clancy is the person she is when we meet her in the TV series.

The Last Best Hope is available now in hardback, ebook, and audiobook, and is coming out in paperback later this year too - It's also available in German and Czech translations! If you've not picked it up, you definitely should, it adds so much to the world of Picard.


Now after that masterful start to Picard novels, you've got to wonder what comes next? Seven of Nine's backstory seems to obvious gap to fill to me. But there are plenty of other threads that could be pulled upon; what would you like to see in future Picard novels?