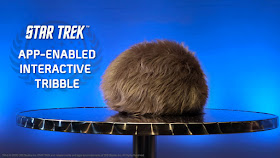 Despite the complications of the Covid-19 crisis, they have just finished shipping out there initial pre-orders, and are now fully open for business for all your ongoing tribble needs.

Science Division is the creation of Kayleigha and Jay, a wife and husband team whose love for Trek and desire for a realistic tribble pet lead to learn coding, found a company, work out manufacturing, and find their way to being officially licensed by CBS - An impressive feat and real show Trek-love. I had a chat with Kayleigha about how mission-tribble is going:


I have this vision of your home being something like the tribble-filled scenes of every tribble episode... Have you been able to keep your tribble hoard under control?


During the development process we joked that the Tribbles were multiplying digitally more than anything else. I (Kayleigha) do all of the graphic design and social media for the business. We’re now onto our second external hard drive of Tribble photos, videos, and business documents. That being said, now that our stock has arrived, we do have a room full of Tribbles. Sadly, they are all boxed up to keep them safe. I did take the opportunity to bury myself in prototype Tribbles, though. I couldn’t resist.

Just how life-like are your tribbles; with the sound and movement I imagine it must be like petting a real animal some times?


“Real” was the whole idea behind this project. The app came later, as an alternate way to play with your pet Tribble. We spent a great deal of time during development testing vibration motors and levels to get the settings just right. We wanted our Tribbles to purr. My grandmother had never seen “Star Trek,” but she immediately laid claim to a Tribble as a pet alternative when we first started out.


Here's a quick look at the different modes of tribble life. At ease is your regular comforting purring tribble:

Guard mode lets you leave a tribble looking after something special; it will scream at anyone that bothers it!

On duty has the tribble ready to spot Klingons, trilling most of the time, but screaming at anyone it thinks is a Klingon:

The above can all be set manually. There's one further mode, attack, which is enabled by the connected app, and overrides the over modes to make the tribble scream at any unsuspecting person you set it upon.

So let's see how these were all brought to life:


I'm curious about how you evolved your tribble plans? Were all the current features of your tribbles on the table from the beginning?  Did the technical side of your tribbles bring about frustrations or opportunities as you developed it?


We started with the idea of making a pet Tribble. That’s where the “At Ease” mode came from. We spent a whole lot of time working on that initial prototype to get it to be alive. After that, we started figuring out how it could detect Klingons, which was “On Duty” mode. That’s kind of when we started developing the story that you could partner with a Tribble as part of a secret mission to find hidden Klingons within the Federation. “Watchdog” mode came later, when we realized that we could use programming we had already done for “On Duty” mode to get the Tribble to guard your stuff. It was my (Kayleigha’s) dad that came up with the idea that you could use an app to change the modes. He was also the culprit behind the “Attack!” button. He thought it would be hilarious to “set it off” on your friends—and he was right.

We learned a lot when we started working with our manufacturer and app-developer, because both of them knew way more about this process than we did. It was our manufacturer that suggested having the Tribble go to sleep in “At Ease” mode if you didn’t play with it for awhile. It allows the batteries to last a whole lot longer without having to open your Tribble up and turn it off all the time. It was a brilliant suggestion that also allowed the Tribbles to be a little more lifelike. Our dog nods off if we leave him alone for too long, too.

There were little technical things that had to get sorted out along the way, but it all came together in a way that allowed the solutions to contribute to a better Tribble, rather than be a hindrance.

My readers and I often speculate wildly about how Star Trek licensing works; of course we only ever see what happens on the public side of things. How was your experience moving your tribble from idea to official licensed product?


It was actually a great experience. The folks on the CBS Star Trek team are all fantastic individuals who love Trek and are excited about the project. It has never felt like we were dealing with a corporation. We get to talk to people. It was the CBS team that suggested we do a panel at STLV last year to announce the Tribbles and talk about what it is like bringing a part of Star Trek to life from a fan’s perspective. That was a dream come true. Who gets to be on a panel at STLV?!

And here are some highlights from that panel, which give a great overview of how the tribbles were brought to life:

I know you've been busy working on the tribbles and promoting Science Division over the last year or so, have there been particular memorable moments from this whole experience?


The best part of all of this is meeting people. We were able to take the prototypes to a few conventions last year, STLV being one of them. The real joy of the project comes from seeing someone’s face light up when they pick up one of these Tribbles for the first time. They just aren’t expecting it to be so soft and feel so real. It’s magical to see that happen.

A very special example of this was at STLV when we asked Nichelle Nichols to sign one of our prototypes. The joy on her face when the Tribble starting purring was a fan moment that one can never forget. And it listened to her! She told it to stop purring so she could sign the electronics box for us—and it did! Nichelle was a huge role model for young Kayleigha growing up. It was Uhura’s love of Tribbles that inspired Kayleigha’s love of Tribbles. We actually just put a Tribble in the mail yesterday for Nichelle as a thank you for her contribution to so many fan’s lives—especially our own.

We also had the incredible opportunity to take some photographs of the Tribbles on the Star Trek Original Series Set Tour set in Ticonderoga, New York. James Cawley was so gracious letting us do that. Those sets are incredible. If you haven’t seen them, go do it (when it’s safe again). That was such a surreal experience, wandering the Enterprise with a pack full of Tribbles!

We set about on this journey to be a part of Star Trek, and the community has just been so welcoming. That’s the real definition of success for the project—meeting new people and making new friends. From the business side, we’ll honestly be lucky to break even, but that has never been what this is about. We are going to have these friends and these experiences forever.

Your mission to bring your interactive tribbles to life has been such personal endeavour; now that your tribbles have started to make their way to their new owners, have you been getting much feedback? I imagine tribbles will have special meaning to many others too, so that perhaps your tribbles have meant a lot to some of your customers?


The best part of our day is opening up an e-mail or notification from someone who is truly delighted with their Tribble.

It was a real fight to get the Tribbles here. The world went crazy just as the Tribbles were about ready to ship to us. It took a lot of problem solving, time, and financial creativity to get those little beasties here, but it was so important to us that we honor our commitment to the people that believed in us and supported us with a pre-order. After all of that, it can be easy to wonder if it was worth it—until you get that one e-mail from someone telling you that their Tribble is their source of joy right now in all the chaos.

And we get paid back tenfold for that joy that we brought to someone, because those messages are bringing us the joy that we need to get through these times right now, too. It’s reciprocal. That’s how Star Trek works.

We have started an excel spreadsheet, just for ourselves, where we are collecting the names that people have given to their Tribbles. We love seeing photos of them in their new homes. We’ve gotten quite a few hilarious “quarantined Tribble” photos. It’s delightful. 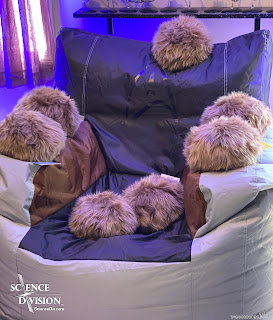 Looking to the future: Can we expect to see more colours?


We would love to do that. Right now we have to focus on keeping our heads above water with this current shipment. If things go well, then we want to have a poll where people can vote for the next color.

Does your tribble mechanism allow for any variations in sizes at all?


We don’t necessarily want the Tribbles to get smaller. We wanted them to be the perfect size for snuggling up to. They could certainly get bigger, if someone wanted a fat Tribble, though. That could be fun.

Any plans for Science Division beyond tribbles?


Not yet. We have to see how this whole Tribble thing goes. It’s a tough time right now to be a new small business, or any business, really. We would love to continue working on quirky fan-based projects. We’ll just have to see what the future holds.

If you would like to get one of Science Divisions interactive tribbles, they are available to order right now from their website. They sound like a really fun and satisfying product, and you'll be supporting a couple of really dedicated trekkies and their small business when every enterprising person really needs that help. 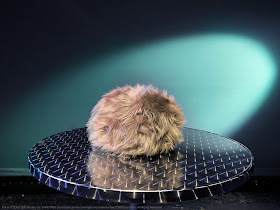 Thanks to Kayleigha for taking the time to share Science Division's story, and for making something really cool. I hope she and Jay will have chance to expand the tribble breeding program long into the future!