Book bits: Covers and excerpts from the latest TOS and Kelvin timeline books

Lots of Star Trek novel and audiobook updates today, including new covers and excerpts from the latest TOS and Kelvin timeline books, and a little update on the Picard novel. Continue below to check them out.

Starting with a brand new cover reveal for the next TOS novel, Dayton Ward's Agents of Influence. Fresh from the Simon and Schuster digital catalogue, I'm really digging the new-style massive Star Trek title, and always enjoy a starshipy cover; this really ticks my cover boxes! 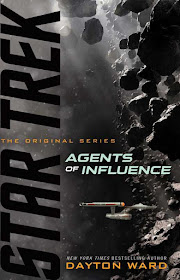 This five-year-missiong era book is due out in June. Here's a reminder of the blurb:


For years, Starfleet Intelligence agents have carried out undercover assignments deep within the Klingon Empire. Surgically altered and rigorously trained in Klingon culture, they operate in plain sight and without any direct support, while collecting information and infiltrating the highest levels of imperial power. Their actions have given Starfleet valuable insight into the inner workings of Klingon government and its relentless military apparatus.

After three of Starfleet’s longest serving agents fear exposure, they initiate emergency extraction procedures. Their planned rendezvous with the USS Endeavour goes awry, threatening to reveal their activities and the damaging intelligence they’ve collected during their mission. Tasked by Starfleet to salvage the botched rescue attempt, Captain James T. Kirk and the crew of the USS Enterprise must discover the truth behind a secret weapons experiment while avoiding an interstellar incident with the potential to ignite a new war between the Federation and one of its oldest adversaries.


Another new-ish cover comes for the next novel out; the long awaited first original adult novel set in the Kelvin timeline, Alan Dean Foster's The Unsettling Stars. Like all Star Trek novels these days, this will be getting a simultaneous audiobook release, read by Trek regular Robert Petkoff. The cover for that edition, featuring an expanded version of the prose cover, has now been released, and looks like this: 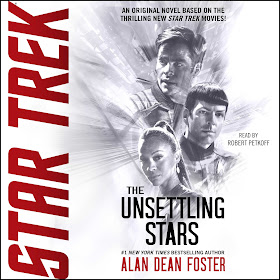 Don't you just wish this had a little subtitle like the TOS books; Star Trek: Kelvin Timeline...? This one is due in April. For a reminder of the blurb, the back cover for the prose edition has now been released too: 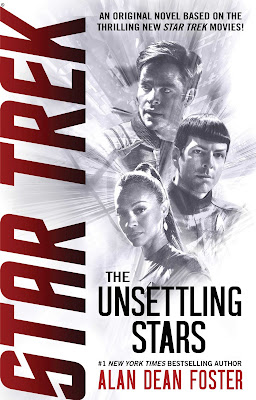 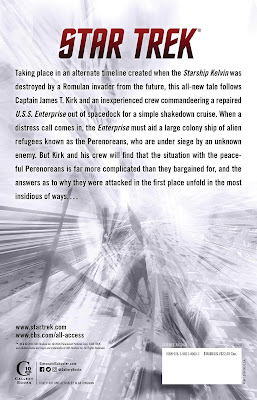 
In other audiobook news, Simon and Schuster have now released an excerpt from the audio edition of the most recent Star Trek novel, Christopher L. Bennett's The Motion Picture era The Higher Frontier. This is also read by Petkoff, who really shows off his voice work in this excerpt:

You can also read an excerpt from the prose version, thanks to this handy Kindle preview: 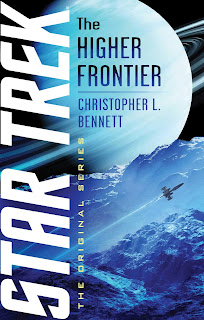 Bennett has also recently updated his website with both an introduction to this book, and extensive annotations (which you should wait to read after the book surely). His introduction gives an interesting insight into how this book fits into both his own Motion Picture era continuity of linked books, and the overall Star Trek novels realm in this changing time for Trek tie-ins:


When the time came to pitch the idea, though, I found it far easier than I expected. When editor Margaret Clark solicited a TOS pitch and I asked whether I should pitch TV or movie era, the answer was a succinct “Either.” Just like that, with a single word, more than a decade of resistance evaporated. I don’t know what changed, but change it did. I suddenly had carte blanche to pitch any movie-era tale I wanted. I could pick up where I left off after DTI: Forgotten History, as I’d always hoped to do.

Nonetheless, I still found myself gravitating toward my plan of skipping forward to the end of the 5-year tour. So much time has passed in real life that it would have felt disingenuous to try to pick up where I’d left off. And I realized that just doing more routine “5-year mission” stories wouldn’t have felt distinct enough from the TV era. I found it more interesting to jump ahead and set up the “special missions” era that followed, which could afford more flexibility in the nature of the ship’s adventures and the crew composition, and even let me explore Chekov’s early days on the Reliant, a ship whose crew has never really been given a highlight in the tie-ins.

But perhaps the main reason I chose to jump ahead was that, with new Star Trek shows establishing new canonical continuity, I wasn’t sure how much longer we novelists would be able to work in the existing book continuity. Thus, I wanted to tell a story that provided closure to the post-TMP narrative I started in Ex Machina, just in case this was my last chance to revisit it — while also, of course, leaving room for more “special missions” novels if it turned out not to be.

And it’s still possible I could continue it. While Star Trek: Picard has presented a new canonical continuity incompatible with the Pocket post-Nemesis novels, it so far does not appear to conflict with anything pre-Nemesis. Hopefully The Higher Frontier will end up being more of a “season premiere” than a series finale. 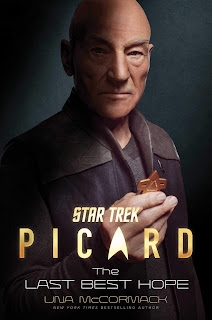 Finally one other book update: Una McCormack Picard prequel The Last Best Hope, the first Star Trek novel released in hardback for many years, now also has a paperback edition scheduled; you'll be able to get hold of that in September.

If you've already read it, then make sure to check out TrekFM's ever dutiful Literary Treks podcast who recently had McCormack on to discuss the book. As is ever the case they have a really good chat about the themes and details of the book, while diving into the author's process. Always worth a listen.


To keep track of all the latest releases, hit the books button on my 2020 schedule page. You can also find series reading lists and author bibliographies on my dedicated Star Trek lists site.