As part of Star Trek Online's ongoing celebration of their tenth anniversary, they are about to release a huge "Legendary" starship bundle, featuring just about all the hero ships spanning Trek (sorry USS Shenzhou, guess you don't count, and La Sirena, you're too new), each freshly specced out for refreshed game-play.

Included will be every variant design of those classes previously released in the game, which means anything up to nine different options for each class. Among those there will be a brand new variant for each class too, with the new options including concept art inspired designs, different era interpretations, and on-screen variants that haven't yet made it to the game. Continue below to check them all out (in rough chronological order):

The NX class has one of the more creative new looks, being reborn as the Columbia class light escort, following the basic layout of the NX-refit, but with a TOS movie era (specified as The Undiscovered Country 2280s) twist:

The class in this release is classified as a Temporal Operative Escort, and is described thusly:


The Legendary Temporal Operative Escort continues a legacy of discovery and vigilance over two centuries long. Inspired by modifications made to the NX-01 Enterprise by Chief Engineer Charles Tucker III, the Legendary Temporal Operative Escort is equipped to face challenges beyond space and time. Five forward weapons, an experimental weapon slot and the Molecular Reconstruction Array combine with the Grappler and Point Defense Bombardment Warhead Consoles to create an escort that can face the dangers of the final frontier with confidence.

And the variants available:

The Crossfield class has a similar approach to it's new look, but its redesign, the Glenn class science vessel, shifting instead to a jazzy 25th century aesthetic:

UPDATE: Here's some sweet concept art for this design from Hector Ortiz:

For the Disco-Constitution class there's a much more subtle variant, based on John Eaves' designs for the ship before the final on-screen tweaks:


This variant is inspired by John Eaves' original concept art for the U.S.S. Enterprise as seen in Star Trek: Discovery. It features a less reflective material, straight nacelle pylons, a smaller deflector, and an enclosed bridge module.

Just like those that crew her, the Legendary Temporal Flight-Deck Carrier represents the best of Starfleet. Inspired by Captain Pike’s U.S.S. Enterprise from 2257, the Legendary Temporal Flight-Deck Carrier incorporates Molecular Reconstruction, Reinforcing Squadrons, five forward weapons and two hangar bays into a durable hull that can face the demands of destiny without fear.

The Kelvin Constitution class new look is taken from the Star Trek Beyond refit.

The Legendary Kelvin Timeline Intel Battlecruiser represents the best and brightest of the 'Kelvin' timeline, a universe where tragedy and intrigue have shaped the events of the 23rd century. Often in situations where it was outclassed and outgunned, the U.S.S. Enterprise pulled through by the skin of its teeth in several occasions thanks to the ingenuity of Chief Engineer Montgomery Scott and his assistant Engineer Keenser. To understand threats waiting for them in the unknown, they added a full intelligence sensor suite. To repel powerful starships, they added another forward weapon emplacement and the ability to mount dual canons and improved maneuverability. The modifications they made to the Enterprise have been propagated to other Constitution-class starships in the Kelvin Timeline Starfleet, yielding the Legendary Kelvin Timeline Intel Battlecruiser.

The classic Constitution class is reborn as the Phase II concept design:


Before Star Trek became a major motion picture in 1979, there were plans to make a new television series titled 'Star Trek: Phase II.' For this series, Matt Jefferies was given the task of designing an upgraded version of the U.S.S. Enterprise. Jefferies was the same artist who designed the original Enterprise, and his Phase II refit design showed a logical technological progression from the ship’s appearance in Star Trek: The Original Series. While Phase II was scrapped in favor of the big-budget movie, the Jefferies’ design would inspire the changes made to the ship as she appeared in Star Trek: The Motion Picture.

The Galaxy class new variant is inspired by the Star Trek Adventures role play game; the Ross class, which is meant to be hybrid Galaxy/Sovereign design.


This ship, commissioned in the 2380s, is a hybrid of the Galaxy and Sovereign-class aesthetic. Featured in the recently-launched Star Trek Adventures roleplaying show "Clear Skies," the U.S.S. Ross pioneers many advanced technology that will go on to become standard on Starfleet ships in the 25th century.

The Clear Skies Twitter posted some additional views of the variant: 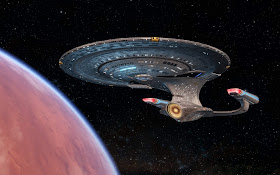 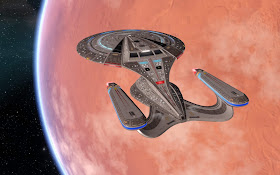 The Defiant class variant is subtle but fun, a selection of nose art (close-up images via STO's Thomas Marrone on Twitter)


Inspired by historical dogfighters and the Defiant's own canonical 'starship development patch.' Each piece of art represents a conflict the Defiant-class has seen service in over the course of Star Trek Online's history.

The Intrepid class brings to life the imagined warship-Voyager:


Seen in the Star Trek: Voyager episode "Living Witness," the Warship Voyager represents an alien species' recollection of the Voyager as viewed through a lens of resentment and fear, armed to the teeth and spoiling for a fight.

For the Sovereign class, we have maybe the slightest variation of the bunch, the John Eaves end-of-Nemesis refit concept:


In the film, the U.S.S. Enterprise E survives a devastating battle with the Reman ship Scimitar and is undergoing a refit to repair the damage from the battle. For the sequence showing the Enterprise being repaired, Eaves created a new version of the Enterprise that had some structural and material differences. The updated design sported larger pylons, adjustments to the saucer and engineering hull, and a darker, more metallic material. This design never made it to the screen but now you can fly it in Star Trek Online!

The Legendary Miracle Worker Assault Cruiser represents a culmination of decades of technological innovation and engineering expertise. Built using the insight of the U.S.S. Enterprise NCC-1701-E’s Chief Engineer Geordi La Forge, the Legendary Miracle Worker Assault Cruiser has access to Innovation Mechanics and comes equipped with Metreon Gas Canisters, Incremental Phase Shift and a Metreon Gas Warhead Launcher. These innovations, along with a pilot engineering bridge officer seat, give it power and flexibility needed to keep the peace in a tumultuous galaxy.

And finally for Star Trek Online's own Odyssey class perhaps the sweetest variant, the Verity class, inspired by the original Adam Ihle design for the class:


Named after the U.S.S. Verity seen in the Picard Countdown comic, the design of the Verity is more directly inspired by Adam Ihle's original contest submission to the Design the Enterprise fan contest that ultimately led to the Star Trek Online's Odyssey class.

The Legendary Command Dreadnought Cruiser is Starfleet’s latest innovation in the super-capital line of starships. After analyzing the performance of the Odyssey class during the Iconian War and Hur’q Invasion, Starfleet engineers have implemented a variety of recommendations made by Chief Engineer Kirayoshi O’Brien and Captain Va’Kel Shon of the U.S.S. Enterprise (NCC-1701-F). These alterations include an improved hangar deck to accommodate small craft operations, large command and control systems for fleet coordination, and dual-cannon hardpoints for increased firepower. Of course, the Legendary Command Dreadnought Cruiser retains the Odyssey class’ impressive suite of existing capabilities and still represents one of the most advanced starships in Starfleet’s armada.

UPDATE: Here's a nice image, from the Hero Collector blog covering this release, showing off all the new variants at once:

All of these ships will be available in a great big bundle in the coming days, with a premium option also offered with a bunch of extra resources and chances to get even more stuff in-game. STO's other anniversary celebrations include the introduction of a new Starfleet/Klingon hybrid design starship, and new crossover Picard/Discovery missions in the game.

In addition to the above, STO have also updated their skins for several of the hero ships (as standard, without having to buy into the above bundle), the make them more screen-accurate. ZEFilms have made this great comparison video to show off the new looks: