Simon and Schuster have released a batch of new blurbs, and in one case a title, for four Star Trek novels coming later this year. These releases span wide range of series, with new TOS, Kelvin, Discovery, and Voyager releases all on the way. Continue below to check them out. Going in release order... 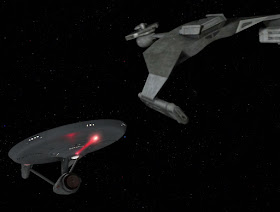 Coming in June is Dayton Ward's Agents of Influence, a TOS five-year-mission adventure, which it seems has a distinctive espionage twist:


For years, Starfleet Intelligence agents have carried out undercover assignments deep within the Klingon Empire. Surgically altered and rigorously trained in Klingon culture, they operate in plain sight and without any direct support, while collecting information and infiltrating the highest levels of imperial power. Their actions have given Starfleet valuable insight into the inner workings of Klingon government and its relentless military apparatus.

After three of Starfleet’s longest serving agents fear exposure, they initiate emergency extraction procedures. Their planned rendezvous with the USS Endeavour goes awry, threatening to reveal their activities and the damaging intelligence they’ve collected during their mission. Tasked by Starfleet to salvage the botched rescue attempt, Captain James T. Kirk and the crew of the USS Enterprise must discover the truth behind a secret weapons experiment while avoiding an interstellar incident with the potential to ignite a new war between the Federation and one of its oldest adversaries. 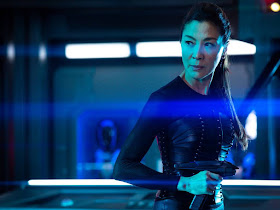 The new title of this batch is for John Jackson Miller's next Discovery novel, which we now know will be called Die Standing. This book, due in July, will focus on Philippa Georgiou, the former-empress version, and some of her Section 31 escapades:


No one in the history of histories has lost more than Philippa Georgiou, ruler of the Terran Empire. Forced to take refuge in the Federation’s universe, she bides her time until Section 31, a rogue spy force within Starfleet, offers her a chance to work as their agent. She has no intention of serving under anyone else, of course; her only interest is escape.

But when a young Trill, Emony Dax, discovers a powerful interstellar menace, Georgiou recognizes it as a superweapon that escaped her grasp in her own universe. Escorted by a team sent by an untrusting Federation to watch over her, the emperor journeys to a region forbidden to travelers. But will what she finds there end the threat—or give “Agent Georgiou” the means to create her old empire anew? 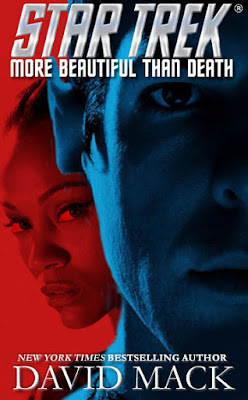 On the way in August is David Mack's More Beautiful Than Death, the second of the resurrected Kelvin timeline novels (finally getting published, alongside Alan Dean Foster's The Unsettling Stars, after being put on hold several years ago). This blurb isn't quite new to the world, as it's been up on Mack's website for some months, along with the cover shown here (not known if that's the final design or not).


Based on the “Kelvin Universe” movie saga!

Captain James T. Kirk and the Enterprise crew escort Spock’s father, Ambassador Sarek of Vulcan, to a dilithium-rich planet called Akiron. They arrive to find this world under siege by creatures that some of the planet’s denizens believe are demons. Sarek orders Kirk to abandon the mission, but the young captain won’t turn his back on people in danger. After a harrowing encounter with the dark-energy “demons,” Kirk’s belief in a rational universe is challenged by a mystic who insists that it wasn’t coincidence that brought Kirk to Akiron, but the alien equivalent of a Karmic debt.

Meanwhile, aboard the Enterprise, Sarek’s young Vulcan aide L’Nel has a sinister agenda—and its chief objective appears to be the cold-blooded murder of Spock! 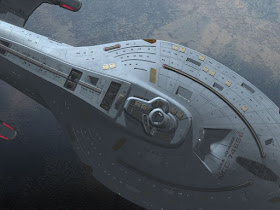 Finally, skipping a month, October brings us the also long awaited continuation of Kirsten Beyer's Voyager novel series, in To Lose the Earth. This book has been delayed due to the author's minor other commitments writing for Discovery and co-creating Picard, while also working on tie-ins to both! The new blurb is teasingly brief:


As the crew of the Full Circle fleet works to determine the fate of their lost ship, the Galen, a struggle for survival begins at the far edge of the galaxy. New revelations about Species 001, the race that built the biodomes that first drew the fleet to investigate planet DK-1116, force Admiral Kathryn Janeway to risk everything to learn the truth.

Beyer talked a little about this book, seemingly the last in this series, in a recent SyFy interview:


As we speak, I am in the process of finishing what will be the final novel in the Voyager re-launch series that began with the book Full Circle. It has taken me much longer than I or my readers would like to do this, but I am also incredibly grateful for the patience of my publishers in allowing me to finish this story arc on my terms and in a way I hope my readers will find satisfying.

After that… it's hard to say. My work on the television series as well as the comics and novels connected to our new series is intense and demanding. That's why it has taken me so long to finish this novel. Once it is done, I will definitely want to take some time to just focus on the series, but as I have told my editors if I ever feel that there is another story I simply must tell in novel form, and it is possible to find the time in my schedule, I would never say never.


To keep track of all the latest releases, hit the prose or books buttons on my 2020 schedule page. You can also find series reading lists and author bibliographies on my dedicated Star Trek lists site.