The End is The Beginning trailer, Picard support shows, and assimilation sign

CBS have released a trailer for episode three of Picard, The End of the Beginning, introducing the series' ship La Sirena and it's captain(?) Cristóbal Rios. Nación Trek has been good enough to get it online (UPDATE: Now on StarTrek.com too):

A clip from the episode also features in this week's episode of The Ready Room, which also has a great featurette on the Romulan makeup in the series, and long chat with writer and producer Akiva Goldsman (also on StarTrek.com, Facebook, or Instagram if you're geolocked our of YouTube below):

If you want even more behind the scenes discussion on Maps and Legends, then you should also check out Deadline's Picard podcast, which this week has executive producers Alex Kurtzman and Kirsten Beyer and director Hanelle Culpepper on to discuss this episode, and it seems drifting a little into the next too.

You can also get a little more behind the scenes insight from this featurette on the Borg, released on Instagram (UPDATE: Now also on StarTrek.com and YouTube):

View this post on Instagram
"They're broken Borg." The Executive Producers and @isacamillebriones take us inside the Borg Cube seen in the latest episode of #StarTrekPicard.
A post shared by Star Trek on CBS All Access (@startrekcbs) on Jan 31, 2020 at 10:00am PST

Talking of the Borg, an amusing product from the Star Trek Shop, who have a talent for mining every little detail and generating timely releases. Last week that brought us a selection of things with Tea Earl Grey Decaf and Daystrom Institute designs on. This week they've on down a far more entertaining path and come up with a "This facility has gone ___ days without an assimilation" write-on sign metal sign. I commend you merchandise people! 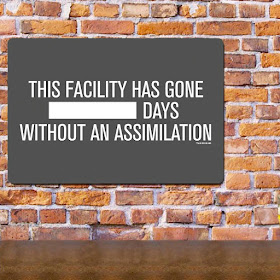 Here's a clip featuring that sign, from Maps and Legends, previewed by IGN just before the episode was released:

View this post on Instagram
Engage! Stream the premiere episode of #StarTrekPicard free at CBS.com until 2/5. Link in bio.
A post shared by Star Trek on CBS All Access (@startrekcbs) on Jan 31, 2020 at 10:00am PST