In the world of Star Trek Online the Federation and the Klingons have swung from being friends, to being at war, to now being really good friends - And that apparently means their starships are now having hybrid babies!

Coming soon, as part of a 10th anniversary event, will be the Khitomer class Alliance Battlecruiser, the first original design from the in-universe Allied Cooperative Starship Development Board, which brings together Starfleet, Klingon, and Romulan expertise to build the new Allied Fleet Service between the three powers - You can read more about the in-universe explanation in a Star Trek Online lore blog.

STO artist Thomas Marrone tweeted out credits for the ship, which was designed by Hector Ortiz and modeled by Tobias Richter. Marrone also shared some addition pictures which highlight a neat feature of this combined service design; the ship's name appears on the ship in both English and Klingon. 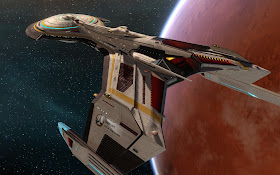 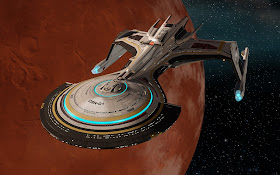 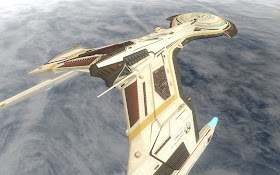 UPDATE: Here's an extra picture via STO's latest blog, which tells you how you can claim the ship as part of the the 10th anniversary Omega event, by accruing 20 days worth of Daily Progress points over the course of the one month event.

You can also check out the ship in motion thanks to ZEFilms:

You can read the full specs for the ship in another STO blog, but among it's features are two special abilities: Aligned Antiproton Shielding, which gives you temporary enhanced shielding, and Automated Shield Alignment, a curious ability to boost shields after having successfully defeated a foe.