Hallmark have revealed an extra Star Trek decoration in their 2019 range of Keepsake Christmas decorations. Coming as a convention exclusive will be the ISS Enterprise, a limited edition 3,475, featuring audio clips from the episode Mirror, Mirror. 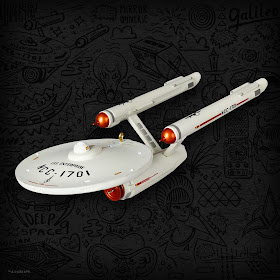 This ornament will be available at the San Diego Comic Con, Star Trek Las Vegas, and the New York Comic Con.

Quite impressively Hallmark have managed to squeeze a third release out of the unique version of the USS Enterprise model here (featuring larger deflector dish and bridge dome, and spikes nacelles), having previously released two variants in 2016, the straight The Cage version, which was also a convention exclusive, and an all gold version which was the one widely available.

This new mirror universe version joins the refit Enterprise and several other designs in the more widely available Star Trek offering this year. See my previous report for details of those, and for a look back at previous Hallmark Star Trek Keepsakes, see my Trek Collective List.