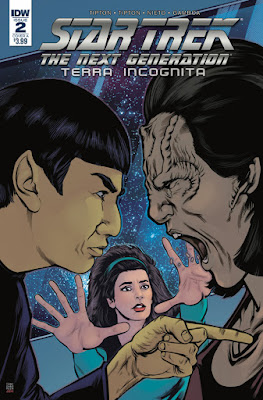 Out this week is the second issue of Terra Incognita,  IDW's latest TNG mirror universe comic series (although the mirror elements are fairly minor in this particular issue).

Scott and David Tipton continue in writing their ongoing mirror universe saga, with Carlos Nieto on art duties for this issue.

The book is available in four different covers, with Tony Shasteen summarising the Vulcan/Cardassian ambassadorial dispute of the book on the A cover. The B cover is a photo-montage featuring this issue's focus character, Deanna Troi. There are also two retail incentive covers; a moment with Geordi and Data by Elizabeth Beals, or J.K. Woodward's own take on the story specifics. 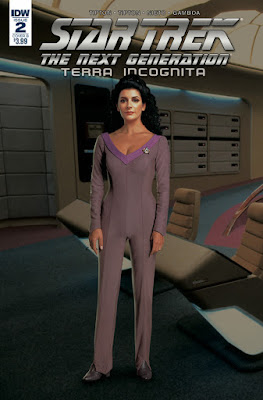 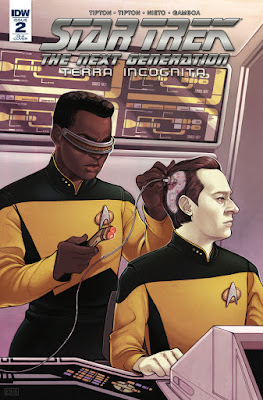 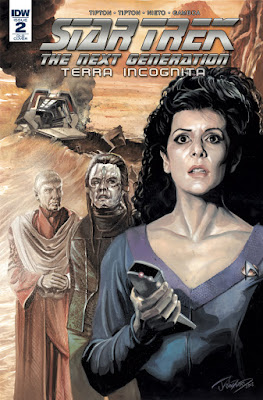 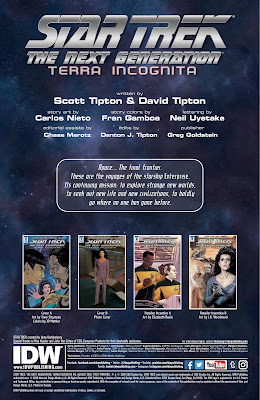 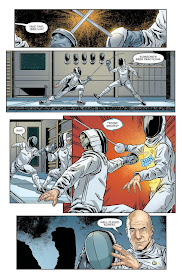 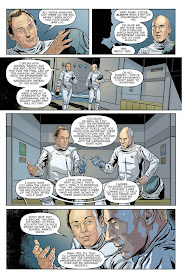 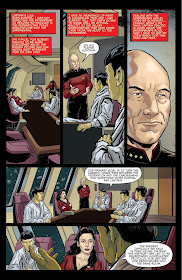 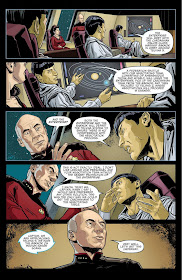 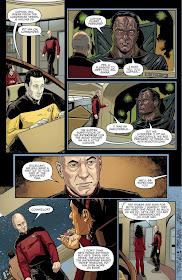 You can continue reading this story by picking up a copy at your local comic book shop, or from online retailers like these: Amazon, Things From Another World, Forbidden Planet, Barnes and Noble, iTunes. 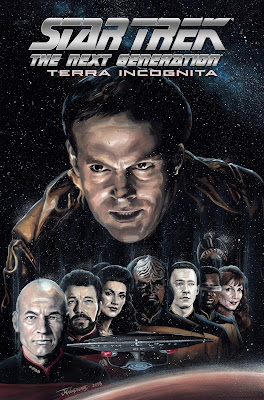 Alternatively, if you'd prefer to wait to read the whole six issue series, the omnibus edition is now listed for pre-order on Amazon, who anticipate an April 2019 release. The book is currently using Tony Shashteen's cover art, originally from an issue one retail incentive.


Following the blockbuster MIRROR BROKEN and THROUGH THE MIRROR storylines comes a brand-new Next Generation series, featuring untold tales of the U.S.S. Enterprise-D!

Following their clash with their villainous doubles from the Mirror Universe, the Enterprise crew returns to business as usual, little realizing the serpent in their midst--one of their own has been replaced! Six stories focusing on fan-favorite crew members of the Enterprise-D--including Deanna Troi, Wesley Crusher, and Selar--each connected by the machinations of this sinister doppelganger. What does Mirror Barclay want, and what's to become of his Prime-universe counterpart?!

This volume collects the six-issue series, continuing the saga of one of Star Trek's most popular iterations. These standalone stories mirror the sci-fi mainstay's established history of "done-in-one" episodes, which keep the series accessible to new fans and emphasize original and fascinating ideas.