IDW have released their solicitations for November, which include three new Star Trek comics. Continue below for all the details of those, and other comics news.

New in November is the return of the anthology series Waypoint, in the form of a one-off oversized special:


The anthology series spanning 50 years of Star Trek returns in this oversized annual! These weird and wonderful stories—set during the Original Series, The Next Generation, Deep Space Nine, and more—expand on rarely explored corners of the universe or provide closure for long-forgotten plot threads. But they all remind us of why we love Trek. This volume features your favorite characters, including Data, Q, and Ezri Dax, handled by the top creators of today and the future!

Some of the creators have filled in some details on their stories: Jackson Lanzig and Collin Kelly's story will be illustrated by Sonny Liew, and focused on Spot and Data, via Twitter. While Matthew Dow Smith's stories is titled Histories, although he's not revealed history of what just yet, also via Twitter. There's just one cover for this book, by Josh Hood: 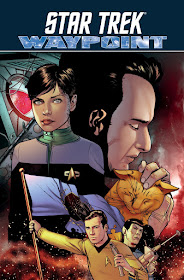 Star Trek vs. Transformers #3
Written by John Barber and Mike Johnson, with art by Philip Murphy


Klingons and Decepticons lay siege to a remote Federation dilithium mine—and the only thing holding them back is the shaky alliance of Captain Kirk and Optimus Prime. But what dark secret is buried beneath the ground… and can this uneasy partnership withstand the revelations?

This book will be coming in three covers, with the not-yet-revealed A cover by Philip Murphy. The other two covers have been released though, and they are a B cover by Gavin Fullerton, and  a retail incentive cover by Megan Levens: 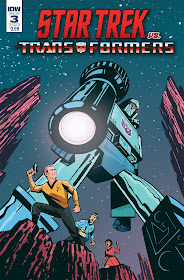 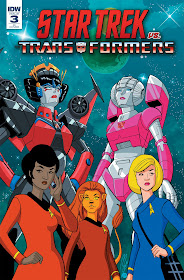 Terra Incognita #5
Written by Scott and David Tipton, with art by Angel Hernandez


On the heels of the blockbuster THROUGH THE MIRROR miniseries comes a brand-new NEXT GENERATION series, featuring untold tales of Captain Jean-Luc Picard and the crew of the U.S.S. Enterprise-D! Interstellar odd couple Worf and Beverly Crusher undertake a difficult mission, but can they overcome their differences to work together?

This book will be available in four covers, with the A cover by Tony Shasteen, and the B a photo-cover. There are then two retail incentive covers, by  J.K. Woodward and Elizabeth Beals. So far only the Shasteen and Woodward covers have been released (you can also see Shasteen's artwork, without the titles in the way, on his Twitter): 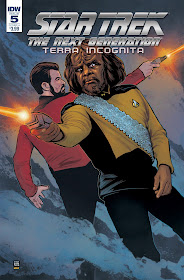 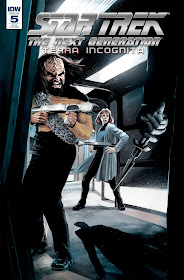 In other comics news, reporting from the IDW panel at Star Trek Las Vegas, TrekMovie noted that IDW hinted towards a future release featuring a young Picard (in his hair-having days), although there are no further details than that yet.

Finally, good news for Italian readers, Italy Comic recently announced they are going to publish an Italian edition of the first Discovery comic series, The Light of Khaless.


To keep track of all the latest Star Trek comic releases, hit the comics button on my 2018 schedule page. You can also find reading lists for several Star Trek comic series on my Trek Collective Lists site.