Star Trek Online's latest expansion, Victory is Life has now launched; as it's title suggests, this is a Dominion and DS9 focused addition to the game, with the Dominion now added as a playable faction, and a bunch of new DS9 story content featuring numerous returning cast members from the TV series. For instance, an unusually war ready Odo narrates the launch trailer:

If you're wondering why Odo is so ready for war, it's because the Hurq have returned and are causing the Dominion some issues! Here's how Cryptic summarise the current events:


The Hur’q are swarming across known space, and the Dominion is fighting a losing battle of attrition against a numerically superior foe. At no point in the long history of the Gamma Quadrant has the outlook been so dire. Allies are needed, as are updated batches of Jem’Hadar, bred to be leaders and trailblazers, born to reclaim their lives through Victory.

Cryptic have also revealed several new designs and additions to the game coming in this expansion, including a rather snazzy looking Jem'Hadar EV suit: 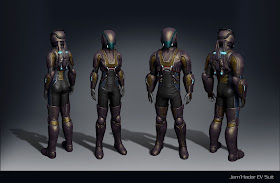 That's not the only new outfit around, via the latest Lock Box in the game you can also get yourself a Hunter outfit, or dress up like your favourite Ferengi:

And indeed you can have several of your favourite Ferengi serve on your ship if you get yourself a holographic crewmember. Available are Nog, Rom, Quark, and Leck, along with Weyoun, Dukan'Rex, Loriss, Sarish Minna, and James Kurland (whoever some of them might be!).

Also coming with that Lock box are two new-old ships, full stats of which can be found via a Cryptic blog. Those are the Jem'Hadar light battlecruiser, and Maquis raider.

Remarkably one of the raider's special abilities it to be able to create a plasma storm, which certainly looks impressive!