A whole load of new Star Trek TV projects are in the works! 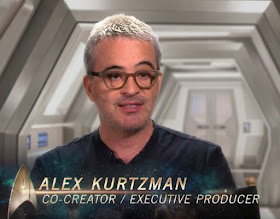 Exciting times trekkies, CBS have announced they have signed up Alex Kurtzman and his fellow Discovery producers Heather Kadin and Aaron Baiers to have their production company Secret Hideout continue to work on TV projects for CBS through to 2023, including specifically expanding the production Star Trek beyond Discovery.

CBS are officially keeping things vague, noting the the deal:


...calls for him to extend the Star Trek franchise for television, developing new series, mini-series and other content opportunities, including animation

But the trade press are already abuzz with what those projects could be. Variety have identified four different projects:
The Hollywood Reporter meanwhile are suggesting that Patrick Stewart might return to play Captain Picard for one of these:


The new deal comes as rumblings about another Star Trek series, featuring Patrick Stewart reprising his role as Star Trek: The Next Generation's Capt. Jean-Luc Picard, have been heating up. Sources say Kurtzman and Akiva Goldsman, who left Discovery after season one, are attached to the Stewart-led reboot. CBS TV Studios declined to confirm the Stewart project as sources say a deal is far from completed and may not happen despite the fact that the actor recently teased his potential return to the franchise.

From those four projects that could easily be an old-Picard miniseries. But imagine if not just Stewart returned, but the entire TNG cast to bring the series back to life in animated form; would give some very interesting possibilities to set it among the existing 24th century era (and crossovers with the other series that would enable). Anywho, that's just my dreamy speculation, but an animated series of any form is I think the most exciting aspect of this, because a presumably younger audience being targeted would help keep Star Trek alive for decades to come.

The overall vision to make Star Trek a vibrant multi-format franchise once more is exciting and welcome! And it seems CBS are really committed to this, as in addition to this deal with Secret Hideout Variety report they are going to "bring on a new executive specifically to oversee the “Star Trek” projects on the studio side".

Here's Kurtzman's statement on the news, released by CBS:


Heather, Aaron and I are thrilled to continue Secret Hideout’s amazing partnership with CBS Television Studios. Since our first collaboration with Hawaii Five-0 almost a decade ago, Les, David and the full team at CBS Studios have been our foremost collaborators and champions, treating each project with integrity, supporting the creative visions and working breathlessly to make each episode of every show the best it can be. CBS has also allowed us the great pleasure of reintroducing the world of Star Trek audiences new and old, and we are very excited to keep working alongside them to expand that world.