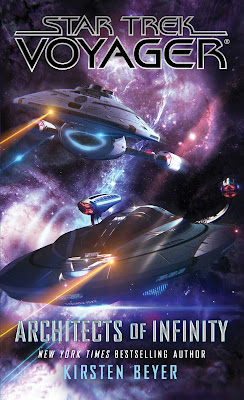 Out now is Architects of Infinity, the latest book in Kirsten Beyer's series of Voyager novels set after the TV series, during the Project Full Circle mission back to the Delta Quadrant. Here's a reminder of the blurb, and continue below to read and/or listen to excerpts from both the print and audio editions of the book.


As the Federation Starship Voyager continues to lead the Full Circle Fleet in its exploration of the Delta Quadrant, Admiral Kathryn Janeway remains concerned about the Krenim Imperium and its ability to rewrite time to suit its whims. At Captain Chakotay's suggestion, however, she orders the fleet to focus its attention on a unique planet in a binary system, where a new element has been discovered. Several biospheres exist on this otherwise uninhabitable world, each containing different atmospheres and features that argue other sentient beings once resided on the surface. Janeway hopes that digging into an old-fashioned scientific mystery will lift the crews' morale, but she soon realizes that the secrets buried on this world may be part of a much larger puzzle—one that points to the existence of a species whose power to reshape the galaxy might dwarf that of the Krenim.

Meanwhile, Lieutenants Nancy Conlon and Harry Kim continue to struggle with the choices related to Conlon’s degenerative condition. Full Circle’s medical staff discovers a potential solution, but complications will force a fellow officer to confront her people’s troubled past and her own future in ways she never imagined…

And here are two excerpts from the audiobook. The second one is worth listening to just to check out narrator January LaVoy's take on the voice of counselor Hugh Cambridge!

Speaking of January LaVoy, Simon and Schuster Audio have also released an interview with her, discussing her work on this audiobook:

Architects of Infinity is out now, in print, ebook, and audiobook. As you may know, things have been getting quiet on the Star Trek novels front lately due to the ongoing license renewal negotiations. Indeed this book should have been published a while back originally, and only thanks to delays due to Kirsten Beyer's work on Discovery is it showing up now in this Star Trek novel lite year. But that could give us a glimmer of hope that we might yet get at least one more Voyager novel from Pocket Books irrespective of the outcoming of the license renewal, as Architects of Infinity was originally announced as being one of two Voyager books Beyer had signed up to write - If we're lucky that could mean the next book, To Lose the Earth, might yet turn up, assuming Beyer's Discovery schedule permits it to actually be written!

To keep track of all the latest novel releases, hit the prose or books buttons on my 2018 schedule page. You can also find series reading lists and author bibliographies on my dedicated Star Trek lists site.