Over the weekend there were pretty slim pickings for Star Trek collectors at the New York Toy Fair, but the handful of newly revealed items were pretty impressive at least. Continue below for all the details.

QMx had several Star Trek figures on display, from their 1:6 scale (12 inch tall) range. Newly revealed is a Star Trek Beyond Captain Kirk, featuring an incredibly detailed recreation of his survival suit. (Image via ActionFigss.com) 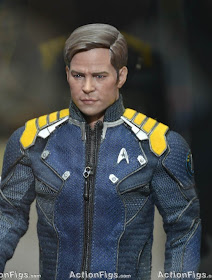 Many other figures in the range were also on display, a mix of those already released and prototypes of forthcoming releases, but all have been previewed before (Image via QMx Facebook).

Likewise Mezco had their smaller One:12 Collective (6 inch) Star Trek range on display, with just one new reveal, Doctor McCoy. They expect him to be on sale later this year. (Image via ToyArk) 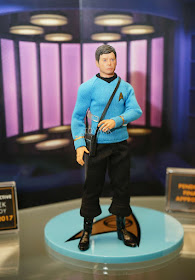 Alongside McCoy was Captain Kirk in his wrap-uniform, sitting on the captain's chair. Both have been previewed before, but now the chair has a vague release date of holiday 2017. 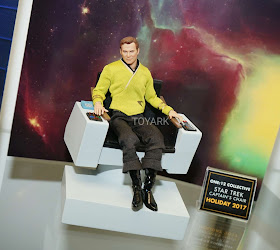 There is also some news of things not on display. 13th Dimension report new licensee NJ Croce will be launching a range of Star Trek "bendable" action figures - Those are characters made out of a single blob of rubbery material, which are flexible, but don't have your usual points of articulation, so look a bit more sculpted than most action figures. NJ Croce typically produce such figures at various scales ranging from three to eight inches tall.

They plan to start Star Trek releases from June or July, and already have several sets in mind:

If the TOS sets do well, they might also look at doing aliens.

Finally Diamond Select Toys did have two new products on display, but wouldn't let anyone take photos. Those were their next ship, the USS Reliant, and a new Star Trek Select action figure, a Borg (they're not specifying who/what sort of drone yet). They will release images when they are ready to solicit orders.