Last summer I reported news that the Movie Park theme park in Germany had begun work on a Star Trek roller-coaster; and now Movie Park have released the first promotional images of the forthcoming ride, which is due to open this spring.

The TNG inspired ride will see "cadets" boarding shuttles to help rescue the Enterprise-D from impending Borg assimilation. Here's the story behind the ride (English language version via StarTrek.com):


Speed is of the essence. There’s no time to think. Every maneuver has to be perfectly executed. There’s only one attempt. Starfleet's enemy the Borg have the U.S.S. Enterprise locked in their tractor beam. The ship and its crew have been captured. The bridge of the Enterprise is deserted. The only hope of rescue is to send Starfleet cadets on a bold rescue mission.

This rescue mission isn’t going to be easy. The Borg ship’s deflector shields will have to be breached so that its main systems can be destroyed. It’s the only way to save the crew of the Enterprise. Despite an incredible adrenalin rush, the cadets have to fully focus on the task at hand. That’s the new mission in deep space for Movie Park Germany’s guests. 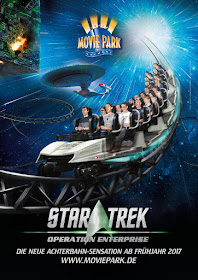 The ride will be the centrepiece of a new Star Trek inspired area of the park, the Federation Plaza, which is at the main entrance of the park no less. So far Movie Park have revealed that area will (of course) include a Star Trek shop, and a large hall, which serves as a waiting area for the ride while taking visitors through the story before they embark on the rescue mission/ride.

The roller-coaster will feature a twisted half-pipe, going as high as forty meters, and  "triple launch" system, which fires the trains up the tracks rather than them slowing being dragged up.

Movie Park have done a fantastically good job chronicling the building of the ride, with regular social media posts. You can see loads of photos on Facebook, including a closer look at the "shuttles": 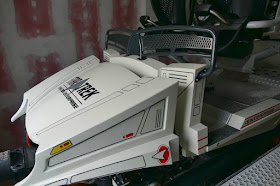 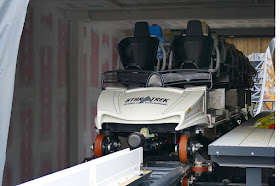 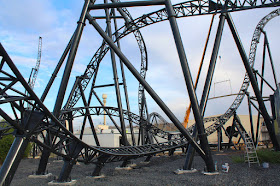 They have also posted several videos, with the latest showing the ride in action while being tested:

And this time-lapse gives a good sense of the whole construction: