Ubisoft have announced their forthcoming virtual reality video Bridge Crew will now include the original USS Enterprise as a playable ship. The Enterprise will be available as an alternative to the game's main Kelvin timeline ship, the USS Aegis, when playing in the Ongoing Voyages mode, which randomly generates solo and co-op missions beyond the game's main storyline. As with the Aegis, the Enterprise can be commanded by one player, or a bridge crew of up to four working together. 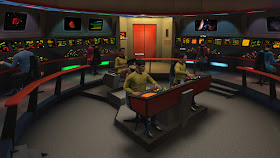 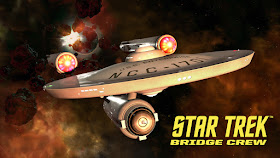 In their blog post releasing this news, Ubisoft also mention a new release date for the game, the 30th of May, which is a couple of months longer to wait than the previously reported (and already pushed back once before) March release date.

They have also released a new blurb for the game, with a slightly longer description of the setting:


Star Trek: Bridge Crew puts you and your friends in the heart of a starship, where- as officers of the Federation- every action and decision you make together will determine the fate of your ship and crew. Developed specifically for VR, Star Trek: Bridge Crew is the only game to offer a true-to-life level of immersion in the Star Trek universe.

In Star Trek: Bridge Crew, the Federation dispatches you and your crew to command the new vessel U.S.S. Aegis as part of a critical initiative. Your mission: explore a largely uncharted sector of space known as The Trench, in hopes of locating a suitable new home world for the decimated Vulcan populace. The Trench contains stunning beauty and undiscovered wonders, but also strange anomalies and dangers yet unknown. The Klingon Empire is also active in the region, and their purpose is undoubtedly a threat to the Federation’s plans. It’s up to you and your crew to chart the sector to determine the Klingons’ aims, and to secure a peaceful Federation presence.

Bridge Crew will be available for PlayStation VR, Oculus Rift and HTC Vive. You can see a trailer for the game in my previous article from its initial announcement.