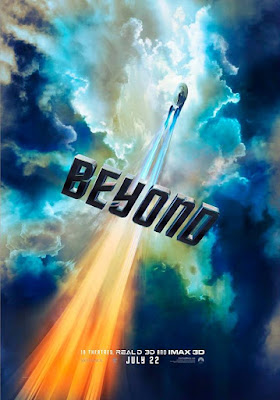 I love all of Star Trek, including wholeheartedly both of the previous Kelvin timeline movies. Like every iteration of Star Trek ever they have their bumpy elements, but like all Star Trek before I am more than willing smooth over those cracks and enjoy the bright shiny vision of our future they show us. So I always approach new Trek with an open mind, looking forward to the things I can enjoy, the beautiful things, the thoughtful things, and the things I will hope too see more of in novels and comics to come. Well Star Trek Beyond has more of those things than is reasonable for a two hour film. I left the cinema grinning in sheer joy at what I had experienced.

I've split this review into five sections, covering the major things I took away from the film. The first two sections are pretty spoiler free (you'd get more from some of the trailers), the rest I spill a few beans, so proceed with caution from section three onwards.

All the crew boldly go

Every member of the main Enterprise bridge crew had their moments in the previous two films, but sometimes they were no more than moments. No longer, while Kirk and Spock's relationship is important here, the leg work has been done, we know they love each other for all eternity, and now the rest of the crew get to play too - This couldn't be made more clear by the way the entire crew is represented in the closing moments of the film.

Following the destruction of the Enterprise the pairing off of the major characters gives different relationships a chance to shine, while emphasising the greatest asset of this film series: The truly exceptional cast.

Kirk, to my surprise, was a real standout performance and arc. He has grown up, he is the captain, from the first moment of the film, which is full of the TOS spirit (and gosh I loved that little prologue), he's confident, but less cocky and more genuinely commanding, and most importantly caring and compassionate. Kirk has an arc about his doubts in the film, and while I'm not sure the payoff could really address his concerns, I'm very happy with how this Kirk has evolved. Having Chekov paired off with this Kirk, and in the terrible circumstances of the start of the film, makes our wiz-kid mature too, and emphasises Kirk's genuine command abilities.

Similarly Scotty is purest Scotty, wrapped up in solving problems, and with the enthusiasm for the curiosities and wonders of the reality he faces that made the nuScotty such a joy from his first moments on screen. Pairing him up with the simultaneously naive and experienced Jaylah brings out the best of those qualities in both of them. I went into the film knowing I would love Jaylah, and I was not disappointed, every single moment of screen-time with her is either joyous or moving. I hope she remains part of the crew for many more adventures.

The weakest pair is probably Uhura and Sulu, and of those two Sulu probably the least well served of all the crew - He's a professional, and while he has a personal stake in what is going on, it's not a point that is pushed very far. Uhura has some more interesting and heroic moments.

In contrast Doctor McCoy and Spock together are simply perfect. nuBones has has a few moments in the previous films, but finally he is let free and fills the entire film with gloriously dry wit, all the time playing off of Spock in a way we've been waiting for since the start of this series.

Cinematically, this film is on another level to any previous incarnation of Star Trek. Space feels BIG thanks to the wonderful wide-shots that make starships little more than a point of light. And when we are close we see ships as we have never done before; shots that roam around corners of the Enterprise no camera has ever got near before, shots that take us into the ship form outside, or move from one part of a location to another. Throughout the film this gives you a real sense of scale and geography. I feel like I comprehend the arrangement of the Enterprise more clearly than I ever have before simply from the way the camera explores her.

The planet Altamid has some stunning vistas, and a wonderfully retro flavour. And Starbase Yorktown sets a new benchmark - I'm afraid Earth Spacedock must sit in the number two slot for me, as Yorktown just stole its favourite starbase prize. I genuinely shed a tear, so moved was I by the wonder of this incredibly construct in the introductory shots. And the way that space was used, and so fully realised later in the film makes the design all the more satisfying.

So here perhaps is the low point of the film. While they tried to build Krall's motivation, in the end, he is just yet another angry man with an irrational sense of what is proportional when plotting revenge schemes. Spoilers from here on guys...

I was so excited when Justin Lin started talking about deconstructing the ideas of Star Trek; there is so much to be minded here; DS9 did a little before - From some points of view, the Federation is nothing but a colonial power, one that sucks in cultures and spits them out as Humans. And now, with politics around the world bringing us isolationist and nationalist extremes in reaction to globalism that story was ripe for the allegorical picking. These things were hinted at, but in all the scenes where Krall is marching about being a cliched mega-villain telling us his cunning plans the best argument raised is "I think you underestimate humanity". I wish so much the deconstruction had dared to dig deep, but like Into Darkness' hints at talking about the "war on terror", the idea was just barelty touched upon and ultimately unfulfilled promise.

The idea of Krall's lifetimes of resentment was pretty interesting, the idea of a character dealing with post traumatic stress by lashing out was pretty interesting. But he was never given the space to articulate his issues, nor sadly did the story even try and find a way to rescue him - I think a far more satisfying ending to Krall's arc would have been for him to see the Federation for the wonderful thing it had become, rather than dying still hating his generation's legacy.

I spent most of this film either wrapped around my legs or with my hand over my mouth in suspense. The destruction of the Enterprise was inventive and exciting through the entire huge sequence, and I felt her death as sorely as I would any character. And then it just kept going, every fight, every moment of peril, and all the other massive sequences latter in the story. Not one of them wasted, not one of them without motivation for one character or another. And every one of them using that exploratory cinematography noted above so perfectly.

I'm not shy to criticise action normally; in many big films I find it simply boring (looking at you Independence Day: Resurgence). But not here, the pace and purpose of every scene made in engrossing throughout.

The love of Trek

And here's the real deal maker, so many of the biggest smiles I had watching this film were from the simplest little nods of continuity, and in-jokes. The wouldn't-Tuvix-be-awful moment, the delightful play of TOS comedy-moment music, Kirk's ripped shirt (and hilarious wardrobe of new ones!).

Almost the most satisfying though is the total embrace of Star Trek: Enterprise. This film is wrapped around the legacy of events a century before, and it is just so pleasing to see it pull tightly on Star Trek's history and continuity like that, most perfectly realised in the existence of the USS Franklin. I'm sure some of the details mentioned about the Franklin are going to tie continuity nuts heads in knots - But as I said earlier, we always find ways to make the details work. The heart was in the right place, and having the cousin of the NX-01 on the big screen was so very satisfying.

In fact the only thing more satisfying is the tribute to Leonard Nimoy and nod to the entire original cast, complete with not-shy-at-all fanfare of the original theme. More tears!

As such an run away trekkie, and a optimistic positive one at that, it is near impossible for me to offer an objective view of any Star Trek story. Even the worst of them a I love a bit! I know part of the reasons I loved Star Trek Beyond a lot is that is is packed full of nods to Trek of the past. But unlike other nostalgia fests (*ahem Star Wars: The Force Awakens*) this films managed to do a lot new with the old. Kirk and Jaylah have extremely compelling stories, McCoy and Scotty fill the screen with joy, and everyone else at the very least exists to do more than be there. Even Krall, a somewhat generic villain, has the nugget of a good idea behind him, even if it wasn't as fully realised as I would have liked. On top of that the film is exciting, funny, and beautiful. I left the cinema having not just hugely enjoyed the film, but genuinely just extremely happy at what I had just experienced. I cannot wait for more.


To keep track of all the latest information on the film, visit my Star Trek Beyond guide page, and see the relevant pages on Trek Collective Archives to find all the other trailers, clips, posters, promotional stills, and featurettes.