Star Trek Beyond round-up: Making-of book and other behind the scenes stuff, soundtrack preview, singing and dancing, posters, tribbles, and more!

Star Trek Beyond is hitting big screens around the world, and the publicity whirlwind just keep spining. Continue below for a round-up of some of the latest, plus a few odds and ends I've not covered yet. Including a new behind the scenes book, Kirk featurette, special effects, representation, dancing and singing stars, posters turning up everywhere, and tribbles in the wild!

First up, recent solicitations have confirmed that the ambiguously titled forthcoming book from Titan Comics, Star Trek Beyond Collector's Edition, is indeed a behind the scenes book. As the solicitation blurb describes:


Go behind the scenes of Star Trek Beyond, the latest chapter in the billion dollar movie franchise, in this jam-packed collection celebrating Star Trek's 13th big screen outing and revealing the details behind the making of the movie! Presenting in-depth interviews with the entire cast and crew, including producer J. J. Abrams, director Justin Lin, regular cast Chris Pine, Zachary Quinto and Karl Urban, and guest star Idris Elba. Plus, discover the technical secrets of the film, from stunts and special effects to costumes and make-up! This is a must for Trekkers everywhere! Available in Hardcover and Softcover editions.

Covers have been released (may not be final), with the hardcover edition using the US poster, and the softcover using the international poster: 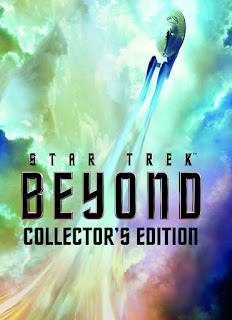 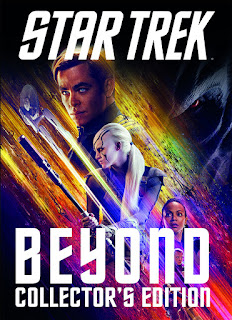 Until that book comes out, there's a steady stream of behind the scenes bits and pieces to keep us going, such as the latest featurette focused on Kirk:

Director Justin Lin also tweeted this photo, which shows us Amazon CEO Jeff Bezos making a cameo, alongside actress Lydia Wilson (Kalara) both in heavy make-up as aliens on set. 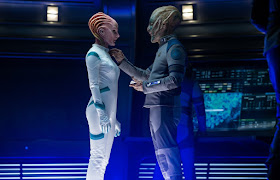 You can also read quite a bit about the effects in the film, produced by Double Negative, in an excellent article on HD Video Pro. For instance visual effects supervisor Peter Chiang explaining some of the changes made to the Enterprise:


All of the digital assets belong to Paramount so we inherited the ILM model. Even so, there was a lot of shader work needed to translate that into the ship we wanted to see onscreen, which is the Justin Lin version of the Enterprise. It goes back in time a bit stylistically, looking closer in appearance to the original TV version, which always seemed a little vulnerable with those slender segments linking the saucer, engineering and the nacelles.

In examining the history of the franchise, you realize the last thing you want to fall into creatively is to just repeat things verbatim. Our new changes included adding a ‘fastback’ aspect to the nacelles, which formed a bit of a ‘V’ shape going back. We also stretched and thinned both the nacelles and the ship’s neck, making them more obvious targets for the scene when the ship comes under attack.

And how they developed the amazing new warp effect:


Right from the outset, I was presenting Justin with ideas on how this could look. We did studies on how light is bent by gravitational lensing, then looked at high-speed shooting of 3000 to 4000 fps to see how bullets create a wake as they travel through water. We also scrutinized images of planes and their vapor trails as they go beyond the sound barrier. I imagined multiple shock waves building up and stacking on one another, forming this layer ahead of the vessel. That tells us we’re traveling at high speed and gives a dimensional quality to it.

You might also have noticed that the effects in the film look amazing like real space photography, and that's no accident:


We looked at a lot of NASA footage to see how the whites blow out in genuine conditions of harsh direct sunlight up there. And I wanted to introduce a lot more of a feel for 3D space this time, in terms of ship and camera movement. That way, it wouldn’t all be so linear, and instead reinforce how there’s no up or down in this environment. Playing with that harkened back deliberately to a bit of the 2001: A Space Odyssey feel, when Kubrick had that Orion space clipper docking with a space station; you had perspectives constantly changing with these rotating objects. 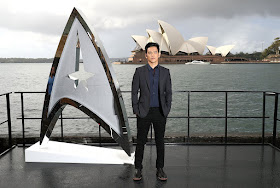 Beyond the special effects, the film is breaking some long due ground in representation, with gay character finally coming to canon Trek, as John Cho revealed when the press tour kicked off in Australia. In an interview with AV Club, Cho talked more about how that came about, and also explained why he specifically requested Sulu have an Asian partner; adding a wonderful extra layer to this newly revealed side of the character:


You don’t really see Asian men together very often. It’s very rare in life. I’ve always felt that there was some extra cultural shame to having two Asian men together, because it was so difficult to come out of the closet, so difficult to be gay and Asian, that they couldn’t really bring themselves… It’s easier to run away from people that look like your family. I wanted the future to be where it was completely normal and therefore, aside from the gender, they look like a traditional heterosexual couple. So that relationship, to me, the optics of it are that it looks very traditional on the one hand and very radical on the other.

On a rather more whimsical note, in an interview with Popular Science, when asked about his favourite gadgets on set, Simon Pegg revealed Scotty has his own little do-dad we never knew about:


My Scotty watch. I’ve worn it in every film, but I don’t think anyone’s seen it. If you press it, it goes all blue and flashy. I like to press it sometimes when I’m bored. I’ve tried to put it in the shot, but it never got in. So it’s an unseen, beautiful thing.

Back with post production, Varèse Sarabande Records posted this little video preview of the film's soundtrack, including some snippets of new themes. Lovely stuff.

Meanwhile in the promotional department, Jaylah has been the center of attention for a lot of the social media stuff, including this little graphic of her markings which was posted on Twitter: 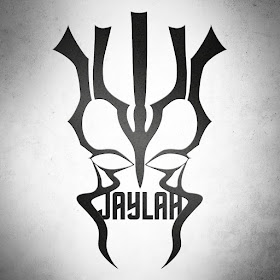 Anyone can become Jaylah thanks to the Snapchat filter, complete with facial markings and golden eyes. Here's one example (from Instagram user astoldbydom)

Back on Twitter, this time from actress Sofia Boutella, is this video of dancing Jaylah. Amazing.

This is one of a frankly absurd number of Dubsmash videos the cast have been posting. Entertainment Weekly compiled a good article with a lot of them, many of which are hilarious. And also quite bittersweet with so many showing Anton Yelchin clearly loving life. Here are a couple of my favourite (second one is sweary if that bothers you):

Also having fun is Idris Elba, who helped with the finishing touches to this huge mural version of the international poster on a building in London (via Twitter): 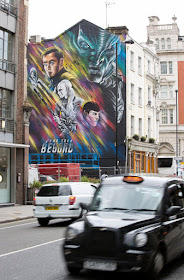 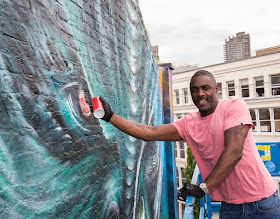 That's not the only place posters have got big, check out this insanely over-postered Powell Street Station in San Francisco (spotted shared by midniteeye and Rus McLaughlin). 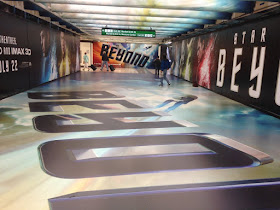 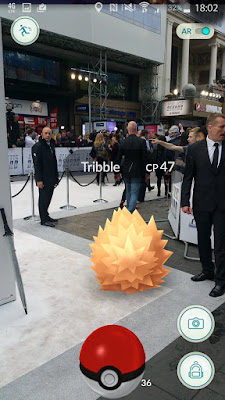 And finally, something I'm not entirely convinced is real, but that I like the idea of: Twitterer Jake Davis posted this image from the London premiere, which shows a Pokemon Go tribble roaming about the edges of the white carpet. Apparently it was uncatchable, and he tried twelve times!

I've not seen any other reports of Pokemon tribbles, so I'm a little suspicious of the tale, but I love the idea!

And that's it, for now. While the film is now out or imminent, the marketing push will continue, and in the coming weeks and months we should have much more behind the scenes stuff to look forward too as those involved in the production are allowed to talk about their work.

To keep track of all the latest information on the film, visit my Star Trek Beyond guide page, and see the relevant pages on Trek Collective Archives to find all the other trailers, clips, posters, promotional stills, and featurettes.