Mattel's Mega Bloks put on a show at the San Diego Comic Con over the weekend, and while they don't appear to have displayed any of their excellent TOS ships and playsets, they did have a bit of Trek going on in their booth, which focused entirely on their Kubros range of stylised figures. Indeed a giant version of the Kubros Spock was one of their centrepieces: 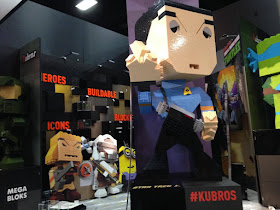 Spock was released earlier this year in the first wave of Kubros figures, which feature characters from an eclectic range of licenses Mega Bloks hold. Mega Bloks have recently announced the line up of the second wave, which will include TNG's Worf, alongside Hell Boy, a Terminator, a Minion and Evil Minion, and a Hunter from the video game Destiny.

Worf, as well as Captain Picard, were among the numerous Kubros characters on display, with Futurama and Family Guy among the latest brands set to join the range. You see everything else on display in Figures.com's gallery, where the images below came from. 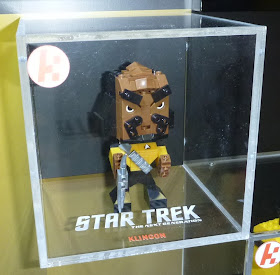 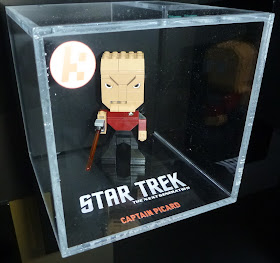 Aside from the Kubros, Mega Bloks had Star Trek all over the Comic Con thanks to their little giveaway mini USS Enterprise sets, which were offered at just about every booth that had any association with Star Trek! They came in three colours, matching the usual department uniform colours, which were also reflected in the little insignia printed on the bases. 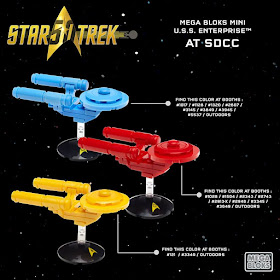 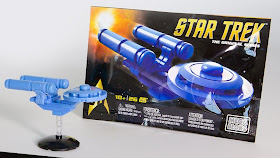 For a look at the entire Mega Bloks Star Trek range, check out my Trek Collective List.