Roddenberry Vault: Week 3 - Talosians on the Edge of Forever

Throughout 2016 the Roddenberry Facebook page will be posting artefacts from their archives, including behind the scenes documents, production artwork, and photos. Dubbed the Roddenberry Vault, there will be new posts every day, some times multiples. To make sure you don't miss any of these insightful glimpses into the production of Star Trek, I will be posting weekly summaries.

The third week has been a fairly even mix of documents, and photographs of the cast and production staff. The last couple of weeks has concentrated on the genesis of Star Trek, and this week continues to explore the pilot episodes, but also gave us glimpses behind the scenes from later in the series too, specifically looking at the episodes The City on the Edge of Forever, and The Deadly Years. Continue below for details of all this week's posts:

Day fifteen gave us a slide, a frame from the TOS opening titles.  On day sixteen there was the story outline for the second pilot episode, Where No Man Has Gone Before. Only the first page was posted on Facebook, but you can find a pdf of the whole document on the Roddenberry website.

Day seventeen was when this week really got good for me though, a delightful picture of Gene Roddenberry hanging out with the Talosians on the set of the first pilot episode, The Cage. 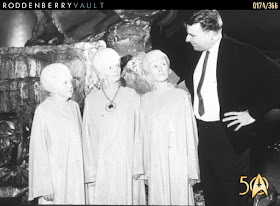 Also posted on day seventeen was a call-sheet from the production of The Cage. Day eighteen skipped further ahead in the series, to possibly the most celebrated episode of the entire run, The City on the Edge of Forever. The were two posts about this episode, some production notes from Bob Justman to Gene Roddenberry regarding details of the "final draft" of the script, and indeed a call not to make the episode at all due to concerns it will cost too much - Again, the full document can be found as a pdf on the Roddenberry website, where you such wisdom as this:


Why do they have to transport down to an area of the planet that forces them to travel on foot for many miles? No wonder our Captain and Crew keep on getting into trouble all the time. They don't have enough sense to save show leather.

The other post of the day was this photo of William Shanter and Joan Collins (aka Kirk and Edith Keeler): 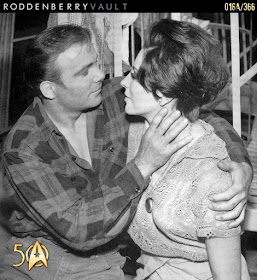 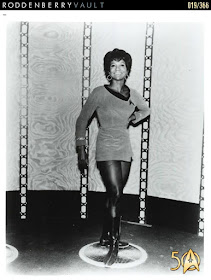 Day twenty is another photo, a nice moment between the Roddenberrys and William Shatner. I especially like the location of this photo, perched on the edge of the bridge set, revealing the reality of its construction. 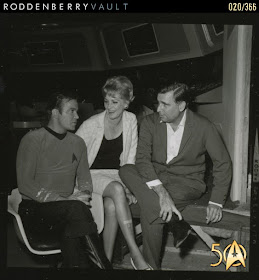 The final post of week three is a nice little montage of shots showing William Shatner being aged, for the episode The Deadly Years: 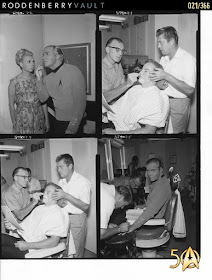 Make sure you follow the Roddenberry Facebook page to catch posts as they come out each day. And be sure to click through to the original posts to check out more images and join the discussions.