A week into 2016, the fifthieth anniversary of Star Trek year, and that also means a week's worth of posts from the Roddenberry Vault, the archive of behind the scenes images and documents being posted on the Roddenberry Facebook page. In this first week we've been treated behind the scenes photos from the production of the pilot episode, The Cage, concept art for the USS Enterprise, and various documents relating to the earliest episodes, including production notes, scripts, and even censorship documents. Continue below for a round-up of contents of the Roddenberry Vault so far:

Day one saw three different posts, including this photo of Gene Roddenberry himself on the set: 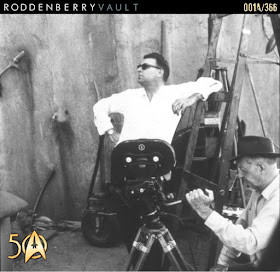 There is also a fascinating pitch document for the series. This first page makes note of the diversity of story-telling Star Trek can offer, including outlines for possible episodes, some you might recognise. You can see further pages from this document on Facebook, as well as the third post of the day, the annotated story outline for The Cage. 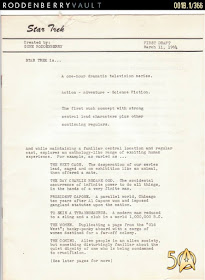 Day two brought us a slide, a still of Pike and Vina on Rigel, from The Cage. Much more insightful, and amusing though is a document from NBC's Broadcast Standards Department (AKA censors), picking holes in things they don't like in The Cage, including fears of profanity, horror, and sexualisation - Great scott! Also posted is Gene Roddenberry's reply to these concerns.

Day three gives us another shot of Roddenberry during the production of The Cage, this time with Peter Duryea, aka Jose Taylor. There is also a notes document about Where No Man Has Gone Before.

Day four gave us two pieces of concept art for the Enterprise, one that seems quite familiar, the other not so much. Also posted on day four was a letter from Roddenberry to his agent, discussing the early issues with the series. 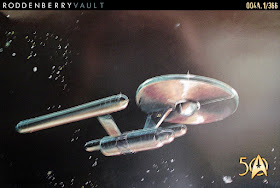 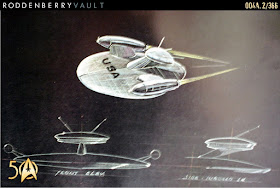 Day five returned to the set of The Cage, this time with Roddenberry sitting in on the picnic scene. The document for the day is notes on The Man Trap. 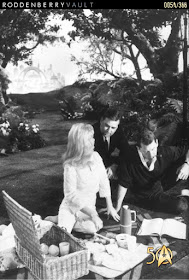 Day six gave us a look at a script for The Menagerie. While day seven gave us some more concept art, a lovely smaller scale version of the Enterprise, which reminds me of Gold Key Comics style Star Trek as it's so off from what we are all so familiar with now. 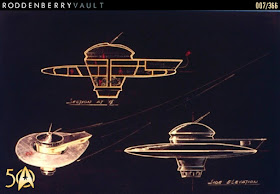 And that was week one; a fascinating start to the year. Make sure you follow the Roddenberry Facebook page to catch posts as they come out each day. And be sure to click through to the original posts to check out more, especially as some of the documents are many pages long. The longer documents are meant to be hosted as pdfs on Roddenberry.com too, although they seem to be having some teething problems getting that archive going.