La La Land Records have announced the long awaited second volume of their Star Trek: The Next Generation soundtrack collection. The new three-disc release follows a similar arrangement to the volume one release (from way back in 2011!), with a wide variety of episodes featured, divided up by composer. Disc one features the work of Dennis McCarthy (plus the opening titles music), disc two is dedicated to Jay Chattaway, and disc three is nominally others, but is actually mostly McCarthy music again, save for one episode (six tracks) by George Romanis, and the closing title music. Continue below for a full track listing, and news of another new soundtrack release. 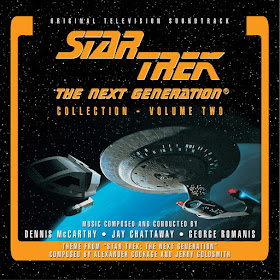 Disc One: Music by Dennis McCarthy
Disc Two: Music by Jay Chattaway
Disc Three: Unfinished Business (all by Dennis McCarthy unless otherwise noted)
All three discs add up to a running time of a little under four hours (3:48:41 to be precise). The collection will be a limited edition of three-thousand units, and will be available from La La Lands' website from the 12th of January. Additionally the first two-hundred or so orders will get a copy signed by Dennis McCarthy.

In addition to the earlier TNG collection, La La Land have also previously produced soundtrack collections from DS9 and Enterprise. It has been suggested previously that they still have plans for a Voyager collection, as well as a second volume of music from Enterprise.

Meanwhile, Mondo are also at work on at least one Star Trek soundtrack release: Teased on Twitter is what appears to be a new vinyl edition of the The Wrath of Khan soundtrack, to be released on a luscious Mutara Nebula inspired disc! No other information on this one yet, but I'm sure we can look forward to some nice cover art to accompany it, as is typical of Mondo's impressive releases. 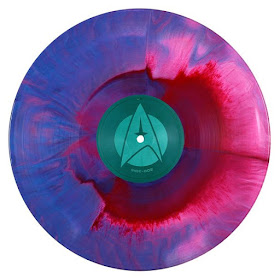