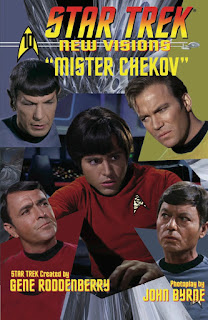 John Byrne's New Visions continues going strong, reaching its tenth issue this week (eleven really, if you count the unnumbered first issue), and very nearly the end of the entire universe! I imagine you can guess who is the focus of this issue, titled Mister Chekov.

The last few pages of this book also include a preview for the next issue, revealing the title, Of Woman Born, a sequel to Who Mourns for Adonais? But you're going to have to wait a couple more months for that one. Until then, continue below for a five page preview of the current issue, as well as some advance looks at other forthcoming issues: 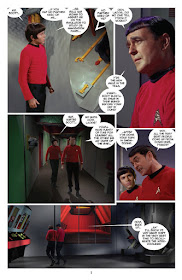 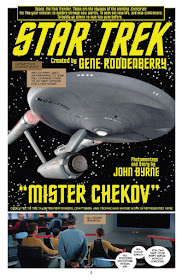 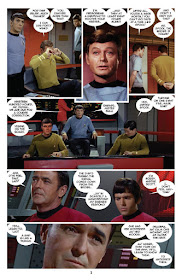 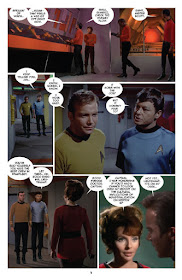 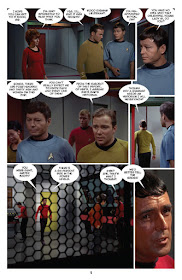 Meanwhile on John Byrne's forums, he has posted a couple of sample panels from a forthcoming issue, which will feature people wearing masks. Using this costume has thrown up some surprising issues when making these images:


Several pages into this story, and I am beginning to be very aware of the degree to which working with photographs creates limitations not to be found in drawings. In this case, it's the size of the helmet. Characters like Iron Man or Doctor Doom wear helmets that are virtually skin tight. Their heads do not appear disproportionately large. Pasting and scaling the CGI masks/helmets in these panels, tho, I am very aware of the actors heads. I can't shrink the mask any more than would be "realistic." 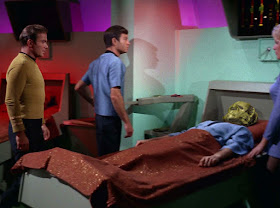 Creating new virtual sets for use in the series has become part of its character now, and Byrne has also previewed his latest new setting, with an intriguing comment on its use:


Basic idea, what if Matt Jeffries designed the 20th Century. . . 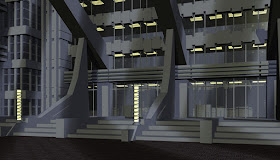 There is also a possibility of a "three captains" (Pike, plus TV and movie era Kirks) crossover issue to mark this fiftieth anniversary year. This is still only a maybe, as Byrne has been finding the limited availability of images from the movie era problematic, but he has given this rough idea of how he would do it, and shared some tantalising test images:


One of the challenges of my P/K/MK idea is that I want to do it without any "time paradoxes." Which means no actual interaction between the three main characters.

I'm seeing MK on Pike's Enterprise (possibly with McCoy, as noted, so that all the exposition won't have to be in Captain's Logs), TOS Kirk on MK's ship, and Pike on the TOS version. Various familiar faces will be there, but the Captains themselves will be replacing their counterparts. 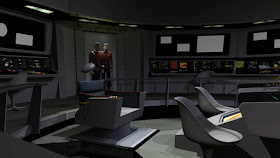 For full listings of all the upcoming Star Trek comic releases, and links to my previous coverage, hit the comics button on my 2016 schedule page. You can also find further comics series reading lists on Trek Collective Lists.