Due out in a few months from Diamond Select Toys, is the Enterprise NX-01, a substantially reworked reissue of the first ever ship in their Starship Legends range of electronic starship models. This release features a new and hugely improved paint-job, and a a host of new sounds and light effects, including dialogue clips, and a lights-on feature - All of which are demonstrated in this new video: 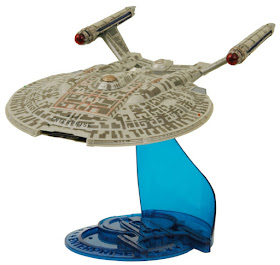 For some reason DST seem to be using a photo (above) of the old paint-job when they solicited this re-release, but they did just release this new photo (below), with the lights on, on their social media channels: 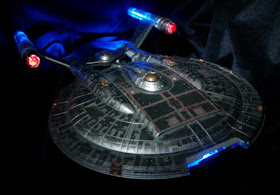 Already available, released a couple of months ago is the latest iteration of their TOS USS Enterprise. The outside has not been updated from previous releases, but it does have some really cool new sounds, including the opening monologue, and lovely bridge sounds to accompany the lights-on feature:

Also due out at some point this year is the Romulan Bird of Prey, and they apparently have a still unidentified Starfleet ship in the works to look forward to. For a look back at all the ships in the Starship Legends series, check out my latest Trek Collective list.