We're in a bit of a golden age of Star Trek non-fiction lately, and this fiftieth anniversary year is a great excuse for even more books exploring Trek from both the real world perspective, and would-be non-fiction from within the universe. Continue below for news of all the most recently announced books, new covers, previews, and more.

First up, from Insight Editions, is a Hidden Universe: A Travel Guide to Vulcan, by Dayton Ward. A preliminary cover for this has been floating around, featuring a lovely new image of Vulcan with a very nuTrek-styled Vulcan city: 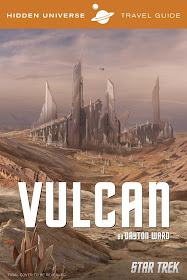 The release of this has been pushed back a few months than was earlier suggested, with it now expected in July. Here's a reminder of the blurb:


Set in the Star Trek universe, Hidden Universe: Star Trek: A Travel Guide to Vulcan explores all that Vulcan—Spock’s home planet—has to offer in an interactive guidebook.

Plan your next trip to the planet Vulcan with Hidden Universe: Star Trek: A Travel Guide to Vulcan! Find restaurants that serve the best fried sandworms and Vulcan port. Take a trip to the Fire Plains or experience spring break at the Voroth Sea. Learn all about the native Vulcan people and their unusual customs. Discover how to correctly perform the traditional Vulcan salutation (you really don’t want to get this wrong). Learn key Vulcan phrases such as Nam-tor puyan-tvi-shal wilat: “Where is your restroom?” Find out what to do if you suddenly find yourself host to a katra—a Vulcan’s living spirit—at an inconvenient moment. All this and more can be found within the pages of this essential travel guide to one of the most popular—and logical—destinations in the known universe.

Hidden Universe: Star Trek: A Travel Guide to Vulcan draws on 50 years of Star Trek TV shows, films, and novels to present a comprehensive guide to Spock’s iconic home world. Modeled after real-world travel guides, the book will explore every significant region on Vulcan with fascinating historical, geographical, and cultural insights that bring the planet to life like never before. Also featuring a dynamic mixture of classic Star Trek imagery and original illustrations created exclusively for the book, Hidden Universe: Star Trek: A Travel Guide to Vulcan is the perfect way to celebrate 50 years of Star Trek and will thrill pop culture fans and hardcore Star Trek fans alike.

Pre-order: Amazon.com, Amazon.co.uk, Amazon.ca, Amazon.de, Amazon.fr.
Also on the way is The Star Trek Book, part of Dorling Kindersley's Big Ideas Simply Explained series. There aren't many details on this yet, other than a release date, in June, and the author, Paul Ruditis - That's the same author who worked on DK's previous Star Trek book, Star Trek: The Visual Dictionary, and like that, the Big Ideas Simply Explained series has a distinctive style which I'm sure will make it a very engaging book; we can look forward to an information dense layout with lots of images and infographics. Should be fun!

Also returning to Trek is Running Press, who have two new Star Trek book and model sets in their miniature editions series. Coming in May is the Light-Up Shuttlecraft, and the Light and Sound Communicator. Both feature small models of the given subject, and come with a small book, authored by Chip Carter. These follow Running Mills's previous USS Enterprise and phaser model and book sets. 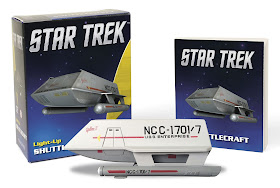 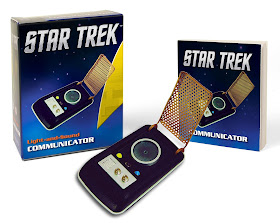 Pre-order: Amazon.com, Amazon.co.uk, Amazon.ca, Amazon.de, Amazon.fr.
Also due in May, from Price Stern Sloan, are two books aimed at younger readers, for which the covers have now been released. The Starfleet Logbook, by Jake Black, is an activity book, challenging readers to aspire to the Starfleet careers of the TOS heroes. 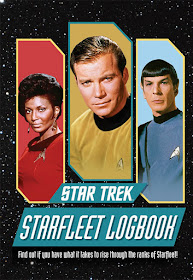 Star Trek: The Original Series is the spark that launched a sci-fi phenomenon! Now a younger generation of fans can move up the ranks at Starfleet, with help from Captain Kirk, Spock, and the rest of the crew on the starship USS Enterprise. Starfleet Logbook is filled with writing prompts, fun activities, and creative games that will help kids' imaginations boldly go where no man has gone before!

Pre-order: Amazon.com, Amazon.co.uk, Amazon.ca, Amazon.de, Amazon.fr, Amazon.es, Amazon.it, Amazon.co.jp.
And then there's What Would Captain Kirk Do?, by Brandon T Snider, a guide to life from the captain of the Enterprise: 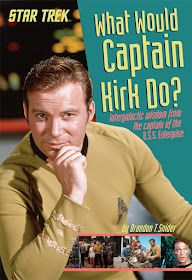 Dig through the many pages of advice in this fun pop philosophy book as narrated by Captain Kirk, based on the characters from Star Trek: The Original Series.

The cosmos is filled with a great many wonders—uncharted worlds, bizarre life forms, chaos and calm. Tread carefully as you navigate through this collection of scenarios as Captain Kirk teaches you how to handle even the most challenging situations. The possibilities are as limitless as the universe itself.

Pre-order: Amazon.com, Amazon.co.uk, Amazon.ca, Amazon.de, Amazon.fr, Amazon.es, Amazon.it, Amazon.co.jp.
Meanwhile in the past, there are a few bit to share relating to recently released books too. Released in hardcover last year, and due out soon (May again) in paperback, is The Autobiography of James T. Kirk, "edited" by David Goodman. Said author has been discussing the book, including an in-depth discussion on the Literary Treks podcast, and an interview with Larry Nemecek on Trekland. Check them both out for more on how the book came to be, and how he worked out the details of Kirk's life.

Trekland also recently posted another Larry Nemecek interview, this time with Mike McMahan, the writer of the TNG parody book, Star Trek: The Next Generation - Warped, An Engaging Guide to the Never-Aired 8th Season, which was published in October.

Also out last year was one of the best behind the scenes Trek books ever published, Star Trek Costumes, the first Star Trek book from Insight Editions, which was written by Paula M. Block and Terry J. Erdmann. You can get a sense of the book in the video trailer (below) Insight Editions have put out, and you can also read about how the authors put it together in an article on StarTrek.com.

Finally, another book published last year, which I had completely failed to notice until now, was Spock's Logic Puzzles, which is pretty much as the title describes! This was written by Tim Dedopulos for Carlton Books, and you can get a sense of what it's like from the excerpt below: 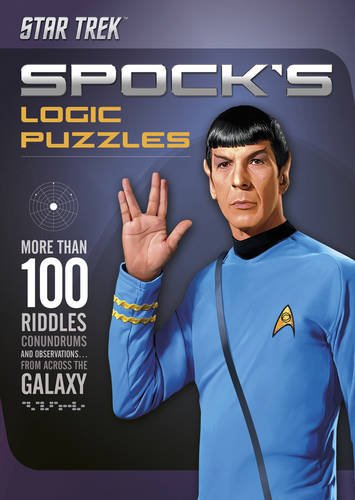 "Once you have eliminated the impossible, whatever remains -however improbable - must be the truth." Spock

Mr Spock is famed throughout the universe for his mental prowess and emotionally removed ability to think clearly and logically. Now there's a way to pit yourself against his mind and learn his "highly logical" way of thinking in the officially licensed Spock's Logic Puzzles. The half- human, half-Vulcan has come up with a series of fascinating and highly challenging puzzles of many varieties. One of popular culture's most enduring characters, Star Trek's Spock is famed throughout the galaxy as a highly intelligent being and this book gives you a chance to gather greater insight into his "interesting" thought process! 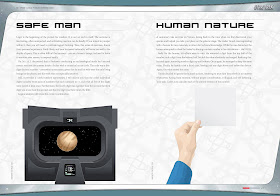 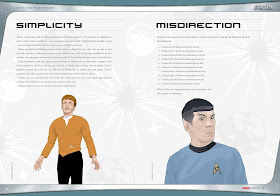 There are several other non-fiction books on the way this year (which I have no updates on at this time), visit my schedule page and click the Non-Fiction button at the top for full listings of forthcoming releases.