IDW have released their solicitations for February, which include two new Star Trek comics, plus an omnibus book. Continue below for the details of all those, and more Star Trek comics news:


The all-new hit STAR TREK mini-series continues here, as Uhura and Kirk draw closer to uncovering the truth surrounding a century-old mystery. Meanwhile, T'Laan and the new cadets find themselves on the brink of elimination from the Centennial Competition!

This one has three covers: The A cover by Charm, a subscription variant by Paulina Ganucheau, and a retailer incentive by Adam Rosenlunc. 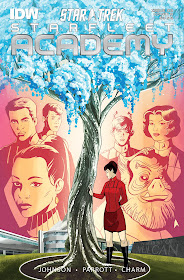 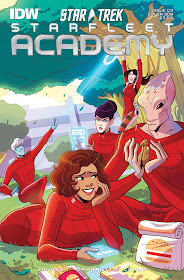 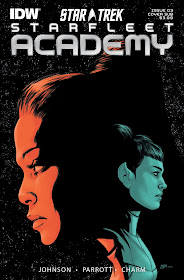 
Galactic peace hangs in the balance as the Enterprise crew battles a renegade Orion faction... and faces betrayal from within! Don't miss the conclusion of this all-new story as events continue to unfold in the lead up to the release of the newest blockbuster Star Trek movie next summer!

This issue has two covers, the main cover by Shasteen, and the subscription cover by Derek Charm, which is part of IDW's Valentine's card variant range which features on several of their titles in February. 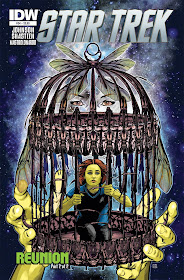 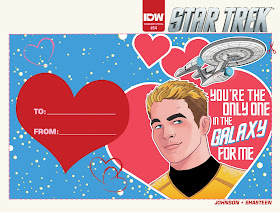 
John Byrne presents all-new, feature-length tales set in the Star Trek: The Original Series universe, done in a unique, one-of-a-kind photomontage style. Collects the stories “Resistance,” featuring The Borg; “1971” where Captain Kirk is sent 200 years into the past to meet Gary Seven; and “The Survival Equation” as killer androids start showing up by the dozen! Collects issues #6–8. 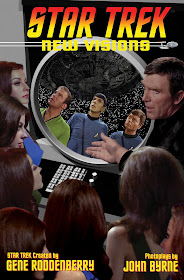 I'vw also got news of two further omnibus books on way. As previously reported, March will see the long awaited release of Star Trek: The Classic UK Comics Volume 1, and Amazon ahve now poster the cover art for that book: 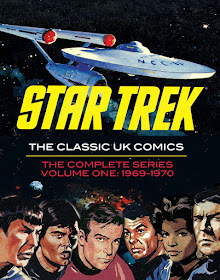 And also new on Amazon is a listing for Gold Key Archives Volume 5, which will collect six more issues of the first ever Star Trek comic series, brilliantly restored to look better than they ever have before (Find out all the details of this omnibus series on my reading list). There's no cover for this one yet, but here's the blurb:


Boldly going... where it all started! Presenting the first comic book adventures of the U.S.S. Enterprise and her crew! Fully remastered with new colors, volume 5 collects issues #25-28 and #30-31, (#29 was a reprint of #1) including the stories "Dwarf Planet," "The Perfect Dream," "Ice Journey," "The Mimicking Menace," "Death of a Star," and "The Final Truth."

Back in the nuTrek world, StarTrek.com recently revealed another cover for the first issue in the Starfleet Academy series. This retail incentive cover is by Elsa Charretier: 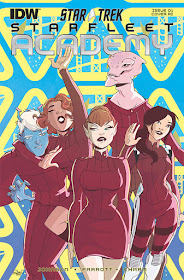 If you want to enjoy some more cover art, IDW editor Sarah Gaydos posted all the cover art, sans titles, for The Spectrum War #5 (the penultimate issue in the Green Lantern crossover) on Twitter. And finally, IDW recently made the "Star Trek Reader's Guide" a timeline sort of thing listing all the nuTrek comics, and their most recent TOS titles. You can find on their website.

For full listings of all the upcoming Star Trek comic releases, and links to my previous coverage, hit the comics button on my 2015 and 2016 schedule pages. You can also find further comics series reading lists on Trek Collective Lists.