Starting in December is the five-part Starfleet Academy comic miniseries, which explores the lives of the Enterprise crew as cadets in the unseen parts of their education from the first nuTrek movie, plus the "present day" class back on Earth while the Enterprise is busy exploring between the events of Into Darkness and Beyond. The series is written by Mike Johnson and Ryan Parrott, with art by Derek Charm.

At the recent New York Comic Con, IDW released an ashcan preview of the first issue in the series, and have now made that available online too. These first few pages reveal a wonderful diversity of alien races populating the scenes, drawn from all periods of Star Trek; adding to the already impressively diverse and representative main cast of the book. Top marks IDW! Continue below to read through the preview, and other news from the series: 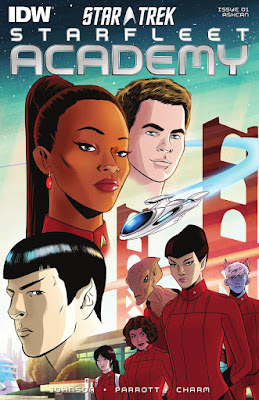 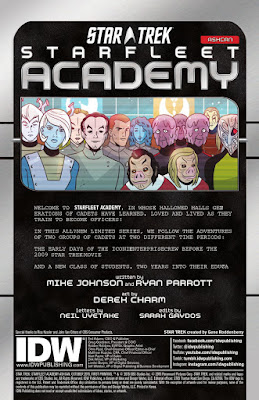 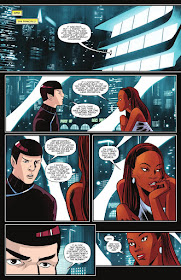 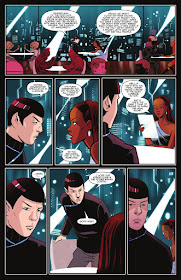 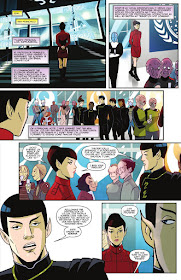 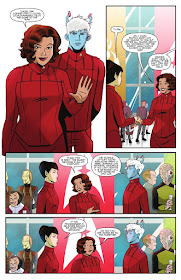 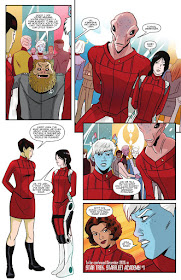 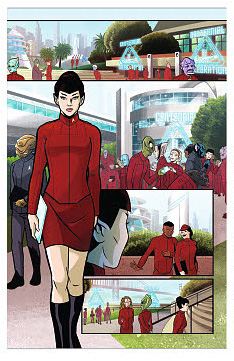 Previews have also posted an interview with writers and artist, and the editor Sarah Gaydos (and also posted a further preview page). Johnson summarised the genesis of the series:


Sarah and I had been talking about ways to build out the universe of the new movie and to introduce new characters beyond just the movie cast. We also wanted a book that would allow for different kinds of stories than those involving the Enterprise crew. Telling stories set at Starfleet Academy killed two Birds of Prey with one stone. We could show more about life on Earth in the future and introduce a new cast of characters, and at the same time we could tell school-based stories that could be more relatable to a new and younger audience. With the success of the ongoing series and with the new movie coming out next summer, this seemed like a great time to give readers all-new Trek stories.

And Parrott and Johnson outlined some of the roles for both sets of characters in the series:


From the very first time Mike pitched me "Academy," T'Laan was always at the center: A Vulcan cadet who arrives on Earth the day her home planet is destroyed. It's a perfect emotional place from which to start. The idea for Grace came from wanting to show that there are still some illnesses and afflictions we haven't been able to wipe out.

Part of the fun of this series will be that Kirk and Spock were both at the Academy, Kirk as a student and Spock as a post-graduate advisor, but they didn't actually meet until the events of the 2009 movie. Uhura knows them both: she met Kirk in Iowa before they arrived at the Academy, and she fell in love with Spock once she got there. This series will explore both the evolution of her relationship with Spock, as well as her grudging friendship with her future Captain. Uhura is really the heart of the series for the original crew, and we get to see life at the Academy through her eyes in a way that we didn't get to in the 2009 movie.

You can read the rest of the interview on Previews. IDW have also recently revealed the beautiful retail incentive cover, by George Caltsoudas, for the second issue in the series: 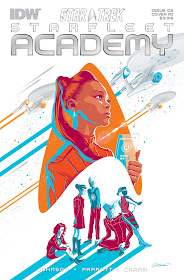 To keep track of all the latest Star Trek comic releases, hit the comics button on my 2015 schedule page.