Lots of books news lately, continue below for all the latest on prose fiction titles, including new details of next year's anniversary trilogy, new blurbs, a new ebooks, the return of Strange New Worlds, and more! First up, pretty new covers to look at.

Two new novel covers have been released lately, the first one here is for A Pocket Full of Lies, Kirsten Beyer's next Voyager novel, due in February: 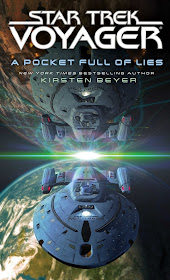 The Full Circle Fleet has resumed its unprecedented explorations of the Delta Quadrant and former Borg space. Commander Liam O'Donnell of the U.S.S. Demeter makes a promising first contact with the Nihydron—humanoid aliens that are collectors of history. They rarely interact with the species they study but have created a massive database of numerous races, inhabited planets, and the current geopolitical landscape of a large swath of the quadrant. When an exchange of data is proposed via a formal meeting, the Nihydron representatives are visibly shaken when Admiral Kathryn Janeway greets them. For almost a century, two local species—the Rilnar and the Zahl—have fought for control of the nearby planet Sormana, with both sides claiming it as their ancestral homeworld. The shocking part is that for the last several years, the Rilnar have been steadily gaining ground, thanks to the tactics of their current commanding officer: a human woman, who appears to be none other than Kathryn Janeway herself...

Speaking to TrekFM's Literary Treks podcast about he most recent book, Atonement, Beyer also revealed she is already at work on the next two Voyager novels following A Pocket Full of Lies. While this next book isn't the start of another multi-book arc, she does already have ideas on where the series is and could be going:


...what I have established in Pocket Full of Lies, is sort of tantalising in the sense that, the story resolves in such a way that we could very easily just never go back there. But even as I'm writing the next two books that have nothing to do with continuing on in that arc, the rest of that arc is constantly in the back of my brain going "ah-ha, and we're going to do this, we're going to do that", and I'm like "shut up I can't be there right now". So I think it's very possible the things that are developed in Pocket Full of Lies will have more far reaching implications

The second new cover is for James Swallow's TOS book, The Latter Fire, which is due out in March. 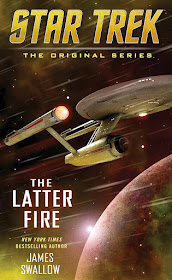 Here's the blurb for that one too:


The five-year mission of the Starship Enterprise has brought the vessel and her crew to the forefront of an important first contact situation. Under the command of Captain James T. Kirk, the ship is heading to the planet Syhaar Prime in the Beta Quadrant—the home world of an alien civilization preparing to take its first steps on to the galactic stage. One year earlier, the Enterprise came across a badly damaged Syhaari explorer vessel drifting in deep space. In collaboration with the explorer’s captain, Kirk and his crew were able to restore the ship to full function and send it on its way. And now, as the Syhaari display rapid technological advances made over the past year, hard questions must be asked. Did the Enterprise crew leak advanced technology or information to the Syhaari during their first encounter, in total violation of the Prime Directive?

James Swallow also recently appeared on Literary Treks, speaking about his most recent Trek book, Titan: Sight Unseen. At the close he also mentions he has ideas for another Titan book, so hopefully it won't be too long until those ideas become an announcement for the 2017 schedule! 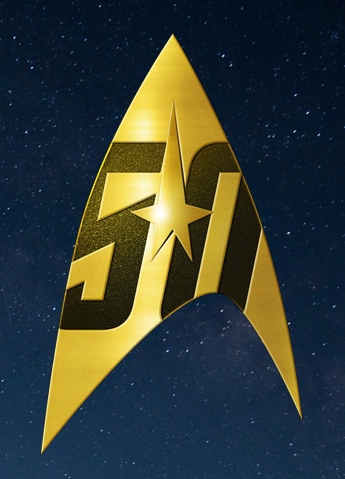 Meanwhile, details of several new 2016 books have arisen. The centrepiece of the fiftieth anniversary year's releases will be the Legacies trilogy, which will be released from July to September, and starts with Greg Cox's Captain to Captain, followed by David Mack's Best Defense, and concludes with Purgatory's Key, by Dayton Ward and Kevin Dilmore. All three are now starting to appear on online listings, including the Simon and Schuster digital catalogue, which has a blurb up for the first book only so far:


Hidden aboard the U.S.S. Enterprise is a secret that has been passed from captain to captain, from Robert April to Christopher Pike to James T. Kirk. Now the return of the enigmatic woman once known as Number One has brought that secret to light—and Kirk and his crew must risk everything to finish a mission that began with April so many years ago…

Sounds exciting! David Mack also teased the trilogy in another recent interview, this time from The G and T Show:


...there is a connecting thread of narrative that ties all three together, but we're not writing cliffhanger books - It's not like Destiny where each book ended on a cliffhanger, and the next book picks it up and runs with it etcetera; each book moves the meta-narrative forward and also tells its own story from beginning to end...

Part of the premise is that we're paying homage to the original series of Star Trek, but also to the genesis of Star Trek itself. So it's going to feature not only Kirk and the crew from the five year mission era, but we're also going to see some of their Enterprise predecessors within the narrative, some of them are going to feature into the story, one of them rather prominently. And we're going to be dropping in lots of little Easter eggs and nods to episodes of The Original Series. Where possible we'll try to drop in nods to, maybe The Animated Series, maybe to some classic Star Trek novels published in the eighties, that were tied into that era.

The key focus is telling a very specific narrative during a very specific period of Star Trek: The Original Series continuity. I think it's going to be a fun little adventure that's going to capture the essence and the spirit of Star Trek; the idea of strange new worlds, new cultures, but also we've got our own complex astropolitical situation that keeps our characters pretty busy. So it's an idea of finding a balance between all those things we associate with and love about The Original Series, and at the same time introducing some new elements and perhaps putting a few new twists on things we thought we knew... 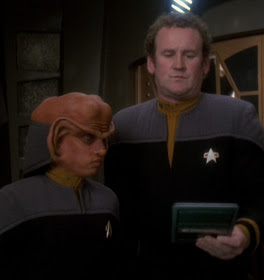 Before all that though, June will see the release of Force and Motion, a new DS9 novel by Jeffrey Lang. The blurb for that too has been revealed in the Simon and Schuster catalogue:


In 2367, Captain Benjamin Maxwell of the starship Phoenix ordered the destruction of a Cardassian warship and a supply vessel, killing more than six hundred crew members. Maxwell believed that the Cardassians were arming for a new attack on the Federation, and though history eventually proved he was probably correct, the Federation had no choice but to court martial and incarcerate him.

Almost twenty years have passed, and now Maxwell is a free man, working as a maintenance engineer on the private science station Robert Hooke, home to crackpots, fringe researchers, and, possibly, something much darker and deadlier. Maxwell’s former crewmate, Chief Miles O’Brien, and O’Brien’s colleague, Lieutenant Commander Nog, have come for a visit. Unfortunately, history has proven that whenever O’Brien and Nog leave Deep Space 9 together, unpredictable forces are set into motion…

The final new blurb of the new batch is for Greg Cox's forthcoming TOS movie era ebook novella. Along with it we have the title, Miasma, and release date, February 2016.


The Enterprise-A is transporting a party of diplomats when it picks up a mysterious alien signal emanating from a nearby world. The planet’s dense, impenetrable atmosphere makes it unclear if the beacon is a distress signal, an invitation—or a warning to stay away. Spock, Doctor McCoy, and Chekov are part of a team sent to investigate, but an unexpected catastrophe forces a crash landing. Now the landing party is stranded on a hostile world, unable to communicate with the Enterprise. While Captain Kirk and Saavik race to locate the lost crew, a badly wounded Spock struggles to keep McCoy and the others alive until they can be rescued, even if that means making an unthinkable sacrifice...

One other book project has been announced recently, following from the previous hints, the relaunch of the Strange New Worlds writing competition is now open to entries. Ten short stories based on any aspect canon Star Trek (Except for TAS and nuTrek) will be published in ebook and print anthologies. There will also be a cover art competition, although the details of that have yet to be revealed. The writing competition it taking entries now, and you have until January 15th next year to submit - Only open to US residents alas. Full details on Simon and Schuster's website. 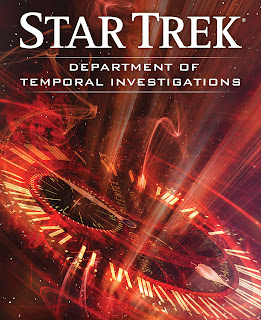 In other books new, Christopher L. Bennett's recent blog post teases some tantalising time travel twists to look forward to in the next instalment of his Department of Temporal Investigations series, another book due next year, Time Lock:


...the premise entails some complicated timey-wimey stuff that required a fair amount of math. Not very complicated math — I’m not up to that — but just a single formula that I had to apply scene-by-scene to keep track of certain interrelationships. I also had to read a bunch of scenes aloud after writing them and time them on a stopwatch. The reasons for this will become clear when the story is published. Let’s just say I’ve found a way to play with time that Star Trek has almost never used before, certainly not in this way. I’m rather pleased with how the story turned out, but it was hard work getting there. I’m also pleased that the story gave me the opportunity to pick up on a thread or two from one of my older Trek novels — and to fix a continuity error I discovered in my own prior work.

Also teasing is Dayton Ward, who on The Captain's Table podcast (speaking about his new TNG book, Armageddon's Arrow), detailed the setting of Elusive Salvation, his sequel to one of my favourite ever Star Trek books, From History's Shadow. That book meshed together TV-era Kirk and co with early Cold War era Earth, while the sequel will move events forward in both eras, with Admiral Kirk and the gang busy in the period before The Wrath of Khan, while the 20th century sections will be closer to the Eugenics War period. Ward also noted that while he hadn't set up the first book for a sequel, he most definitely has put pieces in place for a third book in the series if the opportunity arises.

Finally, upon making your way through this article I whole-heartedly recommend you make your way to Unreality SF to read Jens Defner's brilliant retrospective on the A Time To... series. Jens has been in contact with many of those who contributed to the series, and examines in three parts the creation, execution, and legacy of the huge TNG series that filled in events prior to Nemesis, and effectively began the TNG relaunch books.

To keep track of all the latest releases, hit the books or prose buttons on my schedule pages. You'll find full listings for this year, 2016, and even 2017 already. You can also find series reading lists and author bibliographies on my dedicated Star Trek lists site.