September passed with another hoard of Star Trek stuff to keep us entertained, and it was an especially big month for our bookshelves, with lots of prose, comics, and non-fiction books ready to fill them! Plus there's the usual assortment of model ships, as well as toys, homewares and more. Continue below for a look at everything Star Trek that arrived in September. 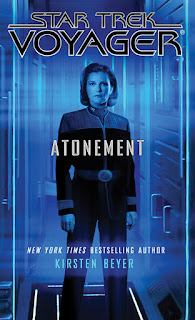 For the third month in a row we got two new prose adventures. The September novel was Kirsten Beyer's Atonement, the latest book in the Voyager relaunch, and the final part of a trilogy of stories, following Protectors and Acts of Contrition. Have no fear though, the Full Circle fleet's mission will continue next year with A Pocket Full of Lies. Until then, here's the blurb for Atonement:


Admiral Kathryn Janeway faces a tribunal determined to execute her for supposed crimes committed during Voyager’s maiden trek through the Delta Quadrant. Captain Chakotay knows that the Kinara, several species now allied against the Full Circle fleet, are not all they appear to be. The Confederacy of the Worlds of the First Quadrant—a pact he cannot trust—is his only hope for unraveling the Kinara’s true agenda and rescuing Admiral Janeway. Meanwhile, Seven and Tom Paris are forced to betray the trust of their superiors in a desperate bid to reveal the lengths to which a fellow officer has gone in the name of protecting the Federation from the legendary Caeliar. 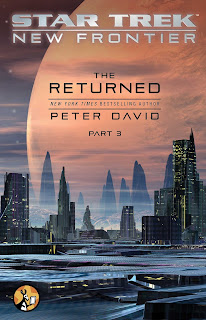 Another trilogy comes to an end in The Returned, Part 3, the final book in Peter David's New Frontier ebook series, which has come out over the last three consecutive months.


Captain Mackenzie Calhoun and the crew of the U.S.S. Excalibur are back, picking up three months after the stunning events depicted in New Frontier: Blind Man’s Bluff. Calhoun's search of Xenex has failed to find any survivors, and now he is bound and determined to track down the race that killed them—the D'myurj and their associates, the Brethren—and exact vengeance upon them. His search will take the Excalibur crew into a pocket universe, where he discovers not only the homeworld of the D’myurj, but another race that shares Calhoun's determination to obliterate his opponents. But is this new race truly an ally…or an even greater threat? 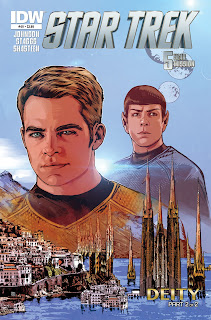 IDW had plenty of new stories this month too, with three new comics, and an omnibus book as well. From the nuTrek ongoing series we had the concluding half of the two-part story Deity, which was the forty-ninth issue in the series. As ever, this issue was written by Mike Johnson, with the currently regular artist on the series, Tony Shasteen continuing with art duties. You can see a few preview pages in a previous report.


The FIVE YEAR MISSION of the Starship Enterprise continues here in the epic conclusion to "Deity"! Up against a fierce new enemy, Captain Kirk must choose between sacrificing his ship and crew or allowing an innocent species to perish! 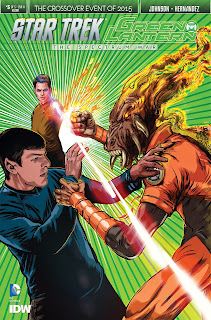 The adventures of the nuTrek crew also continue in the third issue of the Star Trek/Green Lantern crossover series, The Spectrum War. This was again written by Mike Johnson, with artwork by Angel Hernandez. You will find an excerpt from this in an earlier report too.


The blockbuster crossover event of 2015 continues here, as the galaxy explodes in a Lantern-fueled war between the Federation and its enemies! Captain Kirk and the ring-bearing crew of the Enterprise must join forces with Hal Jordan to prevent the loss of entire civilizations... as the identity of the villain behind it all is revealed! 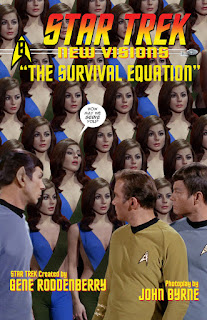 Back in prime reality, John Byrne's New Visions photo-comics series has reached it's eighth issue, The Survival Equation,  which is a sequel both to What Are Little Girls Made of? and one of the earlier issues in the New Visions series. Preview pages once more in a previous report.


Andrea, Ruk, Exo III — names that conjure grim memories for James Kirk. What, then, happens when the killer androids start showing up by the dozen? Plus, a special guest star who’s bound to surprise! 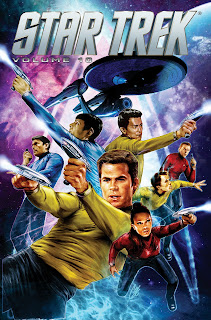 Finally from IDW, there was the tenth omnibus from the nuTrek ongoing series. This volume contains four issues, comprising two two-part stories (despite the blur, it does not contain The Tholian Webs). All were written by Mike Johnson once again, with art by Cat Staggs and Tony Shasteen.


The lead up to the next movie begins here! Following their encounter with the extradimensional entity known as "Q", Captain Kirk and the crew of the Enterprise continue their five-year mission into unexplored space. Cotains the stories "Behemoth," "Eurydice," and "The Tholian Webs" from issues #41-46. 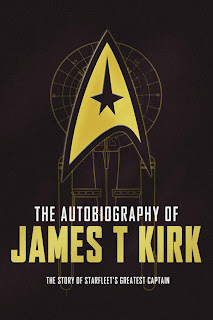 Well, other formats of book, of which there are several new out in September. Earliest in the month, and obviously entirely non-fiction, came The Autobiography of James T. Kirk, an account of the most famous captain in Starfleet history, ghost written by David Goodman. There are also a few new illustrations in the middle of the book, chronicling the captain's life.

The Autobiography of James T. Kirk chronicles the greatest Starfleet captain's life (2233–2371), in his own words. From his birth on the U.S.S. Kelvin, his youth spent on Tarsus IV, his time in the Starfleet Academy, his meteoric raise through the ranks of Starfleet, and his illustrious career at the helm of the Enterprise, this in-world memoir uncovers Captain Kirk in a way Star Trek fans have never seen. Kirk's singular voice rings throughout the text, giving insight into his convictions, his bravery, and his commitment to the life—in all forms—throughout this Galaxy and beyond. Excerpts from his personal correspondence, captain's logs, and more give Kirk's personal narrative further depth. 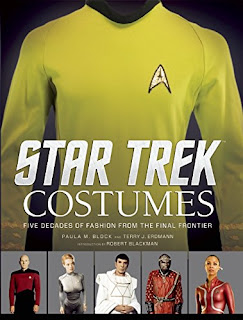 Coming at the end of the month, came the first in Insight Editions' new range of non-fiction titles. Star Trek: Costumes - Five Decades of Fashion From the Final Frontier is, as the title suggests, an exploration of costume design from the entire franchise, brought together by Paula M. Block and Terry J. Erdmann, with interviews from costume designers, and lots of new photographs, as well as archival images. You can see several preview pages in my previous report.


This deluxe book showcases the unique costumes of the Star Trek saga, taking in fifty years of iconic and hugely influential designs. Drawing on the entire franchise, including all twelve films and six TV series, Star Trek: Costumes explores the creation of some of the most memorable garb in the galaxy, telling the complete story of how Star Trek’s outlandishly chic wardrobe has been expanded in increasingly thrilling ways throughout the years.

From the classic Starfleet uniforms and daringly provocative outfits of The Original Series to flowing Vulcan robes, flamboyant Ferengi fashions, and formidable Klingon wedding attire, Star Trek: Costumes explores how these designs have played a key role in transporting fans to distant worlds and alien cultures over the last five decades.

Filled with exclusive photography, stills from the saga, rare concept art, and other striking visuals, Star Trek: Costumes also focuses on the talented individuals who have brought the Star Trek universe to life, including original costume designer William Ware Theiss and his successors, Robert Fletcher, Robert Blackman, and, most recently, Michael Kaplan.

Featuring extensive information on the creation of each featured costume, with insight and anecdotes from interviewees including Blackman, Kaplan, J.J. Abrams, LeVar Burton, Jonathan Frakes, and Ronald D. Moore, this book is a comprehensive and captivating celebration of the incredible artistry that has made Star Trek’s costumes as innovative and imaginative as its futuristic technologies.

Also featuring an introduction by Robert Blackman, Star Trek: Costumes is the ultimate way to experience the incredible fashions of the Final Frontier. 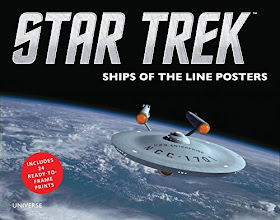 From Universe Publishing, who usually bring us the Star Trek calendar range, we have Ships of the Line Posters, the latest of many spin-offs this year from the starship-art calendar series. The publication features twenty-four prints featuring images from fifteen years of calendars, and all the prime reality Star Trek series. The prints are on thick card stock, each 35x28cm, unfolded, with white bars top and bottom of the panoramic format images.

Conceptual artists and graphic designers breathe incredible life into the alien worlds, serene galactic vistas, famous missions, and harrowing battles from Star Trek history in twenty-four stunning Ships of the Line posters. Formerly included in the long-running Star Trek: Ships of the Line calendar and used as novel covers, none of these images has ever been available in poster form.

This boxed collection of easily framed posters gives fans an all-new, accessible way to display artwork from their favorite sci-fi franchise. Vividly reproduced on high-quality stock and including the artist’s name and the title image, each print makes an elegant addition to any fan’s space. Together, it’s a serious collection of eye-popping official Star Trek artwork.

The quirks of months being slightly longer than four weeks meant there were three new ships from Eaglemoss this month, in the fortnightly releases of The Official Starships Collection. As ever these have made their debut in the UK, and will follow along in other parts of the world as the series progresses in each market. September brought us issues fifty-four to fifty-six, the Steamrunner class USS Appalachia, Vulcan D'kyr class, and the Saber class USS Yeager. 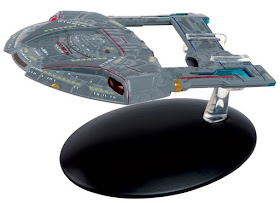 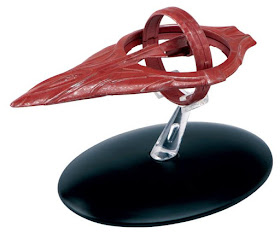 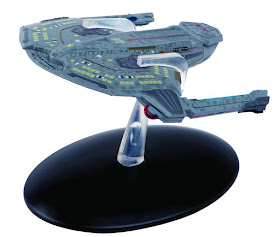 You can find further previews of these ships, and everything else in the series, on my index page.

Three more ships saw release as wave eighteen of Wizkids' Attack Wing miniatures game, those were the USS Phoenix, Species 8472 Bioship Beta, and Quark's Treasure - To the best of my recollections I believe this is the first ever model of the Ferengi shuttle.

High-end uniform reproducers Anovos had at least two uniform replicas due to ship in September, to whose who pre-ordered previously, the Enterprise-era jumpsuit, and the TNG movie era dress uniform jacket. 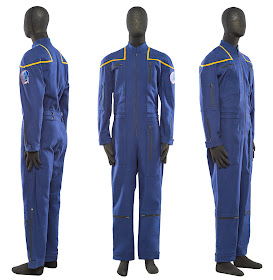 Meanwhile ThinkGeek have been busy! There latest releases include new TOS uniform inspired hats and scarves: 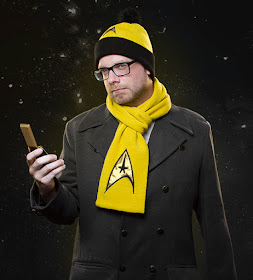 And there's a TNG hats and scarves range too! 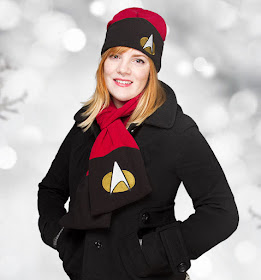 They also have this cool command-delta print skirt, and a sciences inspired raglan top: 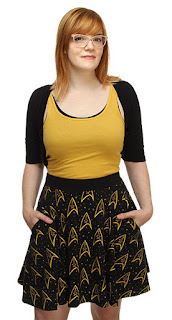 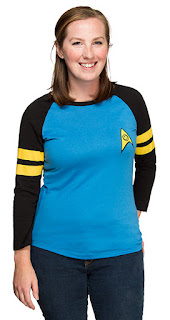 And a whole load of sweatpants, and some new yoga pants too, with various logos and slogans on. 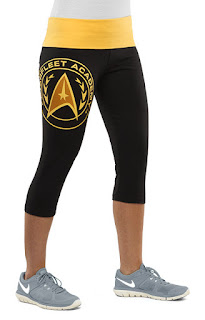 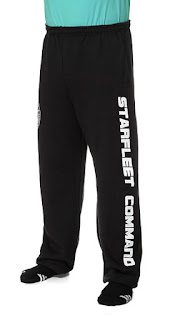 There were a few other bits and bobs new out in September too. Including two new jigsaw puzzles from Aquarius, both featuring images originally used on the first Ships of the Line book, the Federation ships and alien ships fleets, each now delivered in one-and-a-half-thousand pieces. 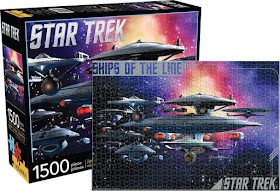 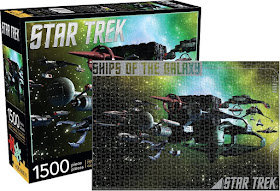 The USS Voyager also appears on the latest set of coins from Perth Mint, paired with a Captain Janeway coin, the silver Tuvalu dollars are available individually, or together in a transporter-style display case. 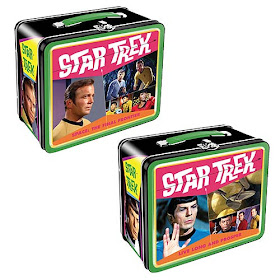 Cross Cult are continuing this month's mission to fill bookshelves, with four new German translations in September! Those include two novels: David R. George III's Revelation and Dust, the first DS9 book in The Fall series from 2013, known as Erkenntnisse aus Ruinen in German. There is also Kirsten Beyer's 2011 Voyager novel Children of the Storm, aka Kinder des Sturms. 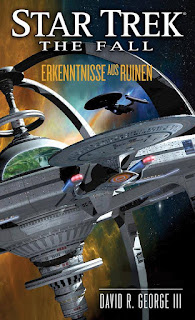 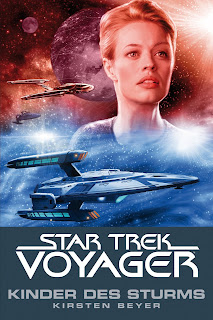 Those are joined by the ebook novella Ferne Vergangenheit, previously released as Past Life, a 2002 Corps of Engineers story by Robert Greenberger. And finally there's the Star Trek/Planet of the Apes crossover comic, the US omnibus was only just released in August. The Primate Directive, by Scott and David Tipton, with art by Rachael Stott, seems to have lost its subtitle in Germany, known just as Star Trek/Planet der Affen. 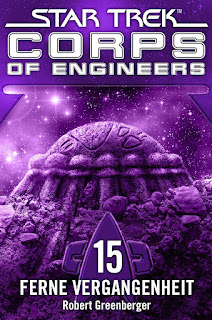 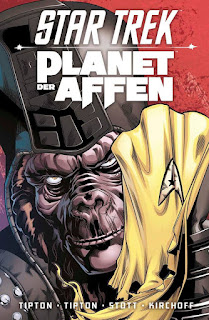 You can find out more about all these items, and everything else out this year, with links to all my previous coverage on my schedule page. You can also find further reading and product lists on my Trek Collective Lists sub-site.